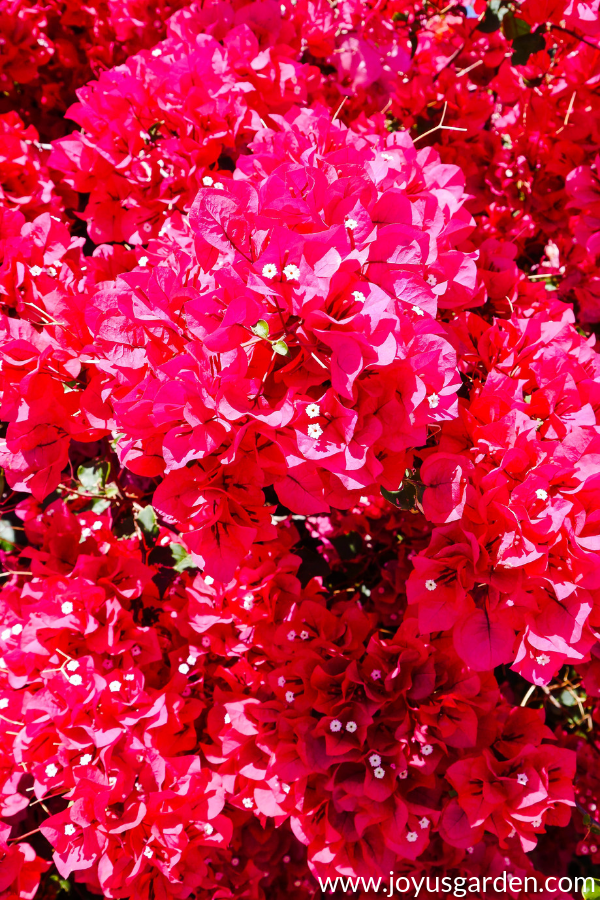 For an extravaganza of color 8 months out of the year, I think it’s hard to compete with bougainvillea. It stops blooming when the weather turns cool because it needs to rest before the show starts again. If you want your bougainvillea to thrive in the warmer seasons, there are a few things to know about bougainvillea winter care.

And no, the lead photo wasn’t taken in the winter. Bougainvilleas usually turn in sticks or “semi-sticks” at this time and that isn’t very enticing at all. You’ll see my not-so-attractive Bougainvillea Barbara Karst towards the end of the video towards the end. It got hit by freeze 2 nights when the temps. were in the high 20’s. It’s alive but lookin’ like a sad specimen right now!

I’ve grown bougainvilleas in both Santa Barbara (on the southern Central Coast of California) and Tucson (in Arizona’s Sonoran Desert) so I have care experience to share with you in 2 totally different climates. I basically do nothing in early winter and start to pay a little more attention to them in mid to late winter.

This is my Bougainvillea Barbara Karst last year in April. It got hit by a couple of freeze nights & looks nothing at all like this now. But, it will again this spring!

There are only a few main points to cover regarding winter maintenance. Here’s what I’ve done and what I do:

In Tucson, I water mine once a week, via drip for 1 1/2 hours, in periods of no rain. Currently, my drip is off & has been off for 3 weeks. We haven’t had rain for a few weeks now so I’ll see what’s happens weather-wise and will most likely turn it back on soon.

In Santa Barbara I didn’t supplementally water mine at all. My bougainvilleas there were very well established. The climate is much more temperate along the coast of California than here in the high valley desert. I lived 7 blocks from the beach so my bougies received moisture via the maritime layer as well as the winter rains.

If your bougainvilleas are young, newly planted to 3-4 years old, you’ll want to water them in long, dry spells. Depending on the temps, water them deeply every 3-4 weeks. Too much water can lead to root rot or too much green growth and not as much flowering in the spring.

Here’s all that flowering that you want. This is Bougainvillea Gold Rush by the way.

No matter what zone you live in, you don’t want to fertilize your bougainvilleas in winter. I have never fertilized a bougainvillea in all the years I’ve been growing and caring for them. I have composted a few of them in late fall but not on a regular basis at all. They’re quite scrappy once established and I figure if they’re looking fine and blooming like crazy, why bother.

This is where most of the action comes in. The pruning that I do in winter is the big one and sets the structure for how the plant will grow and look later on in the season. I’ve pruned all of my bougainvilleas in different ways depending on the form and shape I want them to take.

Bougainvilleas put out a lot of growth after pruning. It’s good to know that they bloom on new growth so that’s why I do lighter prunes throughout the season to encourage all that explosion of color that we love.

In Tucson, I wait until the very end of February into mid-March to do any pruning. Last winter we had 1 light freeze so just the ends of the branches on 1 side got hit. In late December of this year, we had 2 nights that were in the high 20’s so right now my bougainvilleas are just skeletons with dead leaves hanging on them. Bougainvilleas are borderline plants here because the evening temps can dip down but you see them all over town nonetheless.

Even though they look dead, they aren’t. I scratched on the surface of a few branches and there’s green beneath. I’ll watch the forecasted temperatures and will most likely do the pruning in mid-March once the evenings are consistently above 40F. Once the weather warms, the bougainvilleas really take off!

In Santa Barbara, I’d do the winter pruning at the end of January into early February. Even though the daytime temps are similar in the 2 locations, the evenings don’t dip as low here.

A smaller bougainvillea in a container like this one would be much easier to protect from a night or 2 of freezing temps.

I’ve never protected my bougainvilleas here because they’re fairly large. I do protect my fleshy succulents and a few other plants with old sheets and pillowcases. If my bougies were younger or smaller plants, I’d give it a go. If you want to protect yours, be sure to use cloth rather than plastic. You could also mound up a 4″ layer of compost around the base to protect the young surface roots. Just be sure to spread it out once the weather warms.

It’s normal at this time of year. The leaves will drop off green or yellowish-green to make way for the fresh, spring growth to appear. Also, bougainvilleas are semi-deciduous in cooler climates so it’s just part of their cycle. The large Bougainvillea glabra which grew up and over my garage in Santa Barbara would start a major leaf dump every February. I did lots of raking and sweeping when that happened!

This is how my Bougainvillea Barbara Karst looked right after the freeze. It almost looks dehydrated. Later, it turns into a mass of dead flowers & leaves which are still hanging on the branches. They’ll eventually drop off.

That’s about it for bougainvillea winter care. Once the weather warms and they start to take off, that’s a different story. I have you covered with lots of other posts on bougainvilleas so be sure to check them out here!

1. Water according to your climate. At this time of year, cut back on the frequency. And, you may not need to water at all depending on how established yours are.

2. Don’t fertilize at this time. Wait until spring or summer if you feel you need to. Plants are resting at this time of year. You can compost because that works in slowly and will do its magic in spring.

3. Prune when the evenings have warmed above 40F. Pruning forces out new growth and you don’t want that to get hit by another freeze. My bougainvilleas look like sticks covered in dead leaves right now. Although I don’t like the way they look & it’s very tempting to prune them now, I’ll wait.

4. Leaf droppage is normal in winter. It’s part of the cycle where the old foliage sheds to make way for the new spring growth.

This is my Bougainvillea glabra which grew up & over my garage in Santa Barbara. It certainly was an adventure in pruning!

As you can see, I don’t do much at all in the wintertime. I’ve gotten numerous questions regarding Bougainvillea Winter Care and wanted to do a post sharing what I’ve learned over the years. To all my fellow bougainvillea fans, I hope this has helped you out!

Learn all about Bougainvillea:

How To Care For And Grow Bougainvillea

How To Plant Bougainvillea In Pots

Why Is My Bougainvillea Dropping Lots Of Yellow Leaves

Answering Your Questions About Bougainvillea