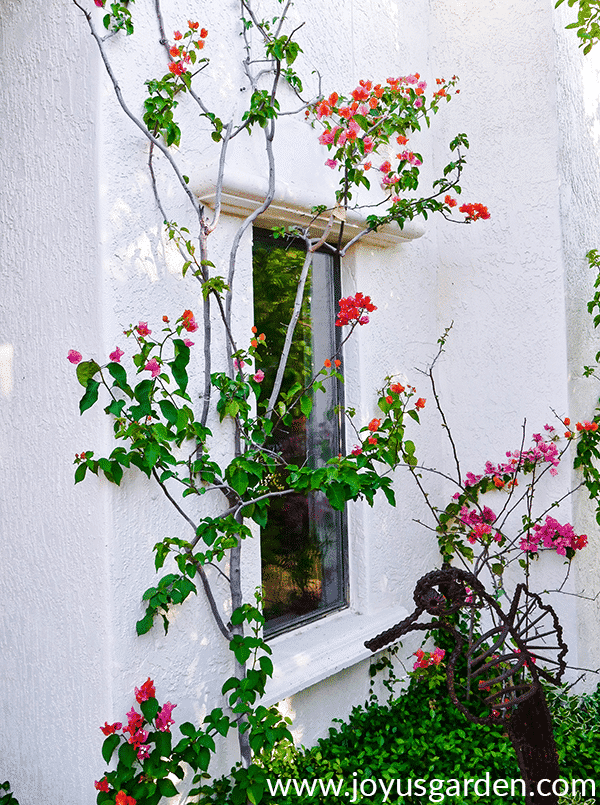 I live in Tucson Arizona, which is USDA hardiness zone 9b and this past winter was cold (for us anyway!). A few nights dipped into the mid to upper 20’s and most of the bougies in town got hit. I’m sharing what I’m in the process of learning about what happens to bougainvillea after a hard freeze.

The 1st year I lived here my bougainvilleas were fine. Last year my “Barbara Karst” got hit on 1 outer section by a light freeze. This year all 4 of my bougainvilleas got hit. I’ve done another post about how and when I prune after a freeze. I wanted to do this one because I heard from quite a few of you around Palm Springs, Phoenix, and the like regarding the same thing happening to your bougainvilleas too.

Yes, I’m learning about this with you. My bougainvilleas have never experienced winter damage like this before. I lived in Santa Barbara for 10 years where the winter temps rarely dip below 40F. My 2 bougainvilleas needed a winter pruning to shape and train only.

I’m going to do a follow post and video for you in about a month or so to let you know what I’ve done pruning wise to my Bougainvillea Barbara Karst. Here is bougainvillea after a hard freeze damage, part 2.

This is my Bougainvillea Barbara Karst soon after it got hit. The leaves eventually dried up but remained on the plant until I pruned it.

I’m going to do this post a bit differently than I normally do. In the video, at the end, you’ll see me talking about pruning my bougainvilleas. It’s been 3-4 weeks since the pruning job and the outcome on my B. Barbara Karst isn’t what I expected. This blog is all about sharing what I know and my hands-on experiences. This is a new 1 for me and perhaps for you too.

That’s why I’m doing a follow-up video and post in about a month to let you know what’s happening. I’m letting my bougainvilleas do their thing for a while and then I’ll do another pruning and training. Right now my Bougainvillea Barbara Karst is putting out a lot of new growth at the base, in the middle and the left side. These are areas where it was more protected from the below-freezing temps.

This is how Barbara Karst looks today. There’s a lot of fresh growth coming out of the bottom & middle of the plant where it was a bit more sheltered from the cold. The other half still looks like dead sticks!

I decided to make this more about the freeze damage and less about the pruning. I’m going to answer a few questions that I got from readers in late December and January. I’ve also added in a few more which I think you might find helpful.

What are the coldest temperatures bougainvilleas can take?

In my experience, bougainvilleas can handle evening temps around 32-34F fine without showing any damage. Last year we had 1 evening which dipped below 30F & mine showed a little damage on parts of the outer & upper branches.

This winter we had 3 or 4 nights when temps went below 29F. 1 of the evenings reached 26F – that’s when most of the damage took place.

If you live in a climate with cold winter temps (like Colorado, Idaho, Michigan, Connecticut, etc) don’t even try growing bougainvillea in yor garden. It can take heat, but not the cold.

Here in Tucson bougainvillea is considered a marginal plant because we do have a handful or so of winter nights which fall below 32F. Regardless, you see it planted all over town. It’s nowhere as big and lush as the bougainvilleas growing along the Southern California coast (where I used to live). You’ll see beautiful bougainvillea in Florida and Hawaii too.

A close up of the new growth emerging. Some of it is sucker growth & won’t flower.

It might survive 1 night of a light frost. My Barbara Karst got the most damage that night when the temps dipped to 26F because there was also a light layer of frost on the foliage. A double whammy!

Will my bougainvillea grow back after freeze?

If it’s only a few nights & they’re not consecutive, it most likely will. The foliage & branches will get hit (like mine) but new growth will appear.

Root damage is another story. Your bougainvillea won’t grow back if the roots have frozen.

When do I prune my bougainvillea after a freeze?

The 1st freeze happened here in Tucson in mid or late December. We had a 2 or 3 in January & 1 in Feb. There may have been a few more but those are the ones I remember.

I would have loved to have pruned my bougainvilleas in January but waited until the end of March to do it. Mid-March would have been fine but I was busy with this n’ that. You know how that goes!

Resist the urge and to wait until after the chance for the last chance of a freeze passes before you prune. Pruning forces out tender new growth & you don’t want to lose that too.

What does winter damage look like on a bougainvillea?

If the freeze is light, initially the leaves & stems droop. It looks like the plant is dehydrated. A harder freeze like this hit almost all of my Barbara Karst. From the 2nd photo in this post, you can see the plant looks like it’s dead.

The leaves dry but don’t fall off the stems. I knocked them off when I did the pruning. The stems or branches look dry & dead too.

The stems or branches look dead but they’re not. When I scratch it, the wood underneath is alive. New growth should be emerging from here but it’s not. I believe the outer layers froze so the new growth can’t pop out. I’ll give it a few more weeks before I do any extensive pruning.

My bougainvillea looks dead. Should I take it out?

You may think your bougainvillea is dead in January but it’s probably not. If it’s the end of spring, temps have consistently warmed & you don’t see any signs of new growth anywhere, then it’s most likely dead. If it’s mid-summer & no growth has appeared

Bougainvillea puts out new growth once the temps warm. In Santa Barbara, I pruned my bougainvilleas in January or early February because the weather is more temperate & there’s little danger of a freeze.

How do I protect my bougainvillea when a freeze is predicted?

If your bougainvillea is large, then it’ll be hard. In that case, the best thing you can do is protect the roots with a thick (4-5″) layer of mulch. If you use compost, you can spread it out once spring has come.

Also, deep water your bougainvillea, if there’s been no rain & a freeze, is predicted. You don’t want it to be doubly stressed.

My 3 bougainvilleas against the house fared much better. They’re a bit more protected by both the building & the grapefruit tree.

I just planted my bougainvillea 10 months ago. Will it survive a freeze?

Young bougainvilleas (newly planted up to 3 years old) need to be protected because they won’t survive a freeze. They won’t bounce back as an established one will. Mulch the roots & protect the plant with sheets or something like this freeze cloth.

This video was mainly shot at the end of March & is more about pruning my bougainvilleas after a cold winter than what I’ve covered above. There are are a few clips at the end where you see how my bougainvilleas look now. If you’re interested in some pruning tips, then be sure to check out the video.

By the way, my bougainvilleas came with the house when I bought it. Check back in a month or so for part 2 and see what’s up with them. The ones against the house are coming back nicely but Barbara Karst will take some working with.

Update: I’ve done a follow post & video 7 months after this one (in early November). You can see how bougainvillea comes back after a freeze.

One thing you can be sure of as far as gardening is concerned – it’s a non-stop learning experience!

You can read several articles on Bougainvillea right here.