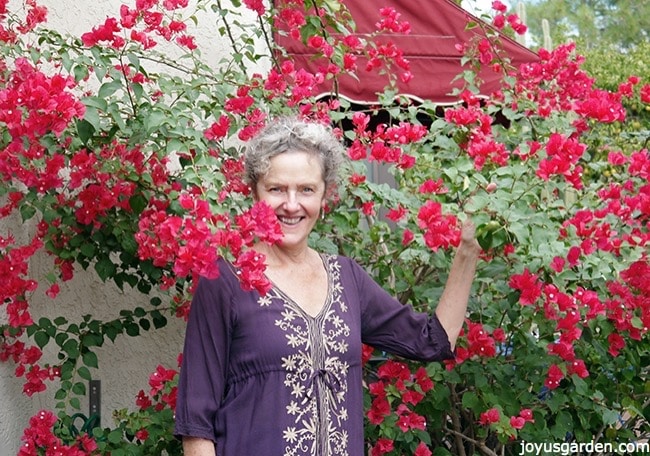 Bougainvillea love in full force here! I’ve recently moved into a new home in the desert where 4 of them grace the garden. I had 2 very floriferous and artistically pruned bougainvilleas in my old garden by the sea which you can see here. This is all about how I pruning bougainvillea and trimming my newly inherited “Barbara Karst” to get those fabulous blooms.

This bougainvillea grows in between my driveway and kitchen patio. Plainly put, it gets a lot of viewing time. It had been pruned and chopped by the previous owner into a rectangular “hedge-blob”. The blob was only showing a wee bit of color at the very ends which had been spared the wrath of the electric hedge pruners.

Bougainvilleas flower as a result of new growth so occasional pruning (not constant hacking) brings on the blooms.

You see a lot of color on large, unpruned bougainvilleas most of which is at the ends of the branches – that’s where the new growth is. By routinely hedge pruning a bougainvillea, you’ll get no or very little flowering. So many other plants make better and easier to maintain hedges. And why have a bougainvillea if you don’t get any color?

This is how my bougainvillea looked before – closely cropped with just a bit of color at the ends.

You can see all the color up high.

* Start at the outside & work my way in. It’s a bit confusing at 1st but gets less so the pruning goes on. Thin out the plant by removing whole branches right back to the main trunk &/or a main branch.  It may seem like you’re removing a lot, but believe me, bougainvillea grows back like crazy.

Remove branches which cross over or are dead.

Then, remove the undergrowth  which has gotten shaded & “wimpy”.

From here, I shape the plant to how I want it to look.  I don’t need it for privacy so an ethereal, airy look is what I’m going for. I continue to remove whole branches.

After I get the overall desired look, I take back the branches that remain by a half or tip prune them, depending on their length.  Tip pruning, in case you don’t know, is the removal of the soft new growth by 1-6″.  You can even do this with your fingernails if it’s easier. This really stimulates that new growth.

I did this pruning over 3 consecutive Saturdays because I only have 1 green waste barrel. This gave me the chance to step away from the bougainvillea and come back and look at it with fresh eyes. I like to handle a bigger pruning project this way – gives me perspective!

This is “Barbara Karst” 2 months later. Not a color explosion like my Bougainvillea glabra in Santa Barbara (pictured below) but it’s showing much more color than when I 1st moved in. It’ll be even more colorful next year!

Your pruners are clean & sharp.  For this job, I’ll use my Felco #2’s, Fiskar Floral Nips & my Corona Long Reach Loppers.

Cut out whole branches (except for the pinching on the ends). Bougainvillea puts out a lot of side growth when pruned so you’ll eventually end up with a dense plant (unless of course that’s what you want!).

And watch those thorns – bougainvilleas have a lot of them. Enough said about that!

Be mindful of your eyes. Besides the thorns, a lot of dirt & “dregs” will most likely fall out when you’re pruning.

The new growth appears at the end of the branches.  The leaves of new growth change color (these are called bracts) & this is what makes the impact. The tiny, white flowers appear deep inside those bracts.

For a riot of color 9 months out of the year you can’t beat bougainvilleas!

Bougainvilleas are vigorous growers once they get established and must be controlled from taking over your world. I’ll give mine a light pruning in December once this flowering is complete. I do the main pruning to set the shape in late January/early February. A few prunings to shape throughout the year will keep my Bougainvillea “Barbara Karst” in that airy yet colorful look I love.