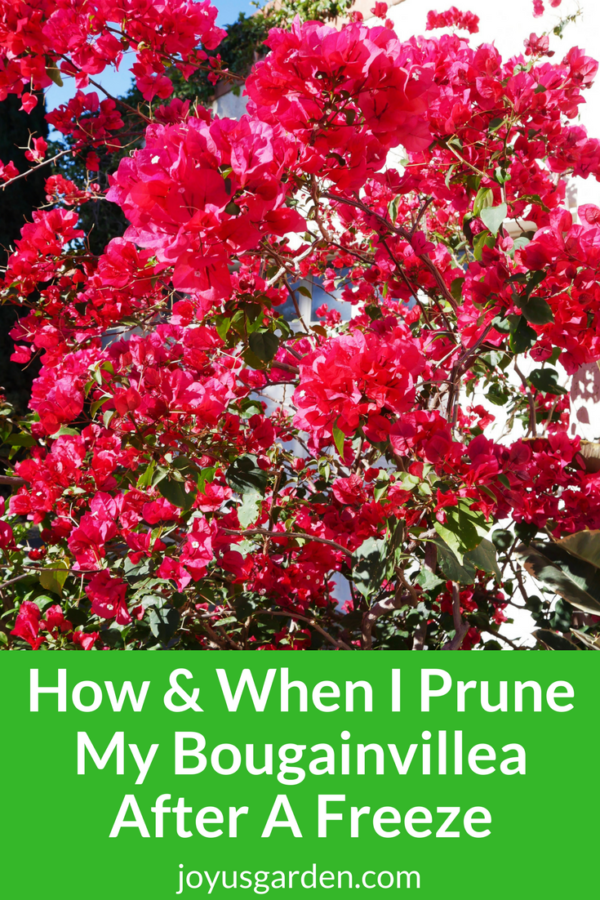 I’ve been growing and caring for bougainvilleas for many years but never ever had this happened.  There’s a first time for everything, as we’ve learned as time goes on. It never dipped too much below 35 degrees F when I lived in Santa Barbara but now I’ve moved to Tucson which is a whole new horticultural ball game. This past December we had a 29-degree night here in the Sonoran Desert so I now get to write about how and when I prune bougainvillea after a freeze.

The freeze damage to mine was light. A prolonged, hard freeze is a whole different story. I experienced that 1 winter when I worked at a nursery in Berkeley, CA and there were many lamenting stories about bougainvilleas biting the dust. Some eventually recovered and some didn’t. Whether it’s a hard or light freeze, it’s best to wait a bit and access what plan of action you’re going to take.

Note: The following year my bougainvilleas got hit by 2 hard freezes. Read about it & see what I did:

Bougainvillea After A Hard Freeze, Part 1.

Bougainvillea After A Hard Freeze, Part 2.

My Bougainvillea “Barbara Karst”, which grows by the driveway and is more exposed, got hit the hardest. My other 3 bougies are flush against the house and a bit protected by the pink grapefruit tree. Their foliage got damaged but it all falls off as the new growth comes out so 2 months of looking at it didn’t bother me.

Now at the end of March, 2 of them are flowering and the fresh growth is fast emerging. The Barbara Karst is in full bloom right now and I’m loving the riot of color by my kitchen patio.

Bougainvillea can handle an overnight freeze, possibly 2, just fine coming out of it with a little “cosmetic damage”.  Some of the tips of mine (which you can see here) looked dried or burned & I cut them off or back completely. You can see how the new growth is emerging from the inside of the branches where it was more protected.

Materials I use to prune bougainvillea after a freeze:

My Felco #2 pruners. These have been my go to’s for almost 30 years now & I wouldn’t garden without them. Make sure they’re clean & sharp before you start a job like this.

Gloves. As much as I love nature, I have no desire to have dirt under my fingernails!

A ladder. Necessary to cut off those taller branches.

I didn’t use my loppers or pruning saw like I did with my bougainvilleas in Santa Barbara because I wasn’t cutting off any of the thickest branches.

This is how the branches looked soon after the freeze. When I 1st noticed it, I thought the plant was dehydrated.

When I prune bougainvillea after a freeze:

I waited until the possibility of any more freeze nights had passed. You don’t want to prune too early and then have that tender new growth get nipped. I waited until the 1st week of March but could have done it in late February. I pruned my bougainvilleas in Santa Barbara earlier (in late January or early February) because the climate is more temperate.

The driveway side after the pruning.

Pruning after a light freeze is basically how I do the winter pruning except for the removal of those damaged end branches. Here is how I prune the plants:

I stand back to look at the whole plant & assess what plan of action to take. I do this 3 or 4 more times as I’m pruning to make sure to get the look I want. Typically, I work in 1 area at a time & move on to the next.

I started on the driveway side in the corner near the garage by pruning a few outer branches so I could work my way in. I then take out branches which cross, those that are weak or awkward & anything dead.

Good to know: take out whole branches back to the main branch or smaller branches where they connect to the branch they’re growing off of. If you don’t, you’ll end up with a very dense plant.

Working my way into the innermost section of the plant, I removed all the weak, spindly growth. This will never grow strong because of a lack of light.

I pruned down the tallest branches by at least a foot because I don’t want this bougainvillea to get too tall.

The freeze damage was all on the outer, upper branches. I cut that out completely or partially, depending on how & if it was growing back. New growth was appearing on most of the frozen branches; if only at the base.

Good to know: I prune neighboring branches with new growth facing up on 1 & facing out or down on the next. This way all the new branches don’t fill in the same way & the plant doesn’t become a big blob.

I tip the outer branches to the length I want them.

Good to know: bougainvillea blooms on new growth so this pruning brings on more color.

The patio side after the pruning. Indeed a nice sight from the kitchen & patio table!

I like this bougainvillea to have a somewhat airy look because I don’t need it as a privacy block. It always starts to fill in a bit as it grows so another pruning is in order. I prune this after a big bloom (usually 3 times a year), do occasional tippings and this big haircut to set the shape for the year. Bougainvilleas = pruning but the show of color is so worth it!