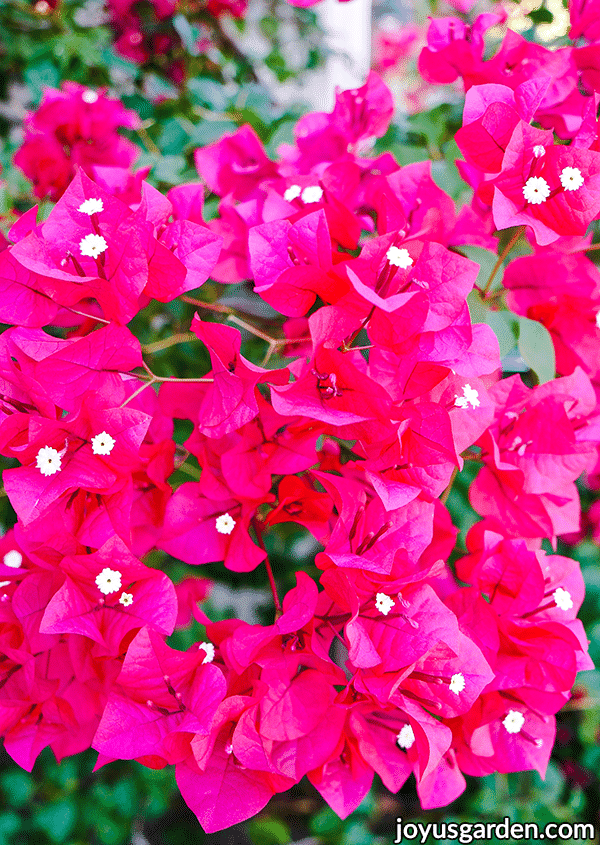 I live in Tucson Arizona, which is USDA hardiness zone 9b. The winter of 2018/2019 was cold—for us desert dwellers anyway. A few nights dipped into the mid to upper 20s and most of the bougies in town got hit.

I received lots of questions and comments from readers and viewers regarding this topic, especially in January. The temperatures dipped in parts of Arizona and California so people were unsure if their bougainvillea would come back.

My bougainvilleas actually got hit by 3 nights of below-freezing temperatures. These nights were staggered over weeks which was good. Consecutive freezing nights can do a bougainvillea in because that’s when the roots get damaged.

Do you have questions? I answer commonly asked questions about bougainvillea here.

This wall of bougainvilleas grows in Santa Barbara where I lived for 10 years. The evening temps rarely dipped below 40F so the danger of freeze damage here is slight.

Over half of my Bougainvillea Barbara Karst initially looked like it was dead but only the foliage and branches received the damage. The roots were just fine. By the end of winter, all but a few lower branches were looking dead.

You can see what I mean by clicking on the 2 links below to see how it looked and what I did in April.

I’m going to answer some questions 1st and then give you a timeline of what went down with these freezes. You’ll also find out what I’ve done and how it affected the bloom. Barbara Karst is a vigorous grower and a big bloomer so it’s a good indicator. My other 3 bougainvilleas aren’t as floriferous.

Can Bougainvillea Survive a Freeze?

Yes, it can. What determines if bougainvillea can survive is how many consecutive nights & if the ground freezes. With mine, most of the outer branches & foliage got hit but the roots didn’t get hit because the ground didn’t freeze. The damage was cosmetic only.

What is the Lowest Temperature Bougainvillea can Tolerate?

The sweet spot for bougainvillea is above 32F. Anything below that will cause light or extensive damage. Tucson is slightly colder in the winter (USDA zones 9a/9b) than Phoenix (10a/10b) where bougainvillea gets bigger & has a better chance of not being hit.

I’m learning all about this topic with you.  I lived in Santa Barbara for 10 years where the winter temps rarely dip below 40F. My 2 bougainvilleas needed a winter pruning to shape and train only. Bougainvilleas are winter marginal here in Tucson but you see them planted all over town regardless.

How Does Bougainvillea Come Back After a Freeze?

It depends on how bad it’s been hit & how & when you pruned it. Mine growing against the house opposite the pink grapefruit tree didn’t get nearly as much damage as my Barbara Karst growing in the driveway area. They have a thinner growth habit & don’t flower as much because the grapefruit tree shades them.

My Barbara Karst looks the same right now (early Nov.) as it did last year. In spring & summer that wasn’t the case. I don’t let it get too tall & keep it pruned as a full shrub rather than a climbing plant. I waited until mid-April to prune it. I could have done it a bit sooner but kept putting it off because other things (life!) got in the way.

If yours is tall & you cut it way back, you’ll most likely get a lot of foliage growth.

How Do I Prune Bougainvillea After a Freeze?

Wait until the evenings have warmed above 40F. You can read & see how I pruned mine in those 2 posts linked back to back above.

I keep my Barbara Karst pruned as a shrub & don’t want it to get too tall or wide. How you prune yours will depend on how badly it’s been hit & the form you want it to take. You may have to prune it 3 or 4 times to get it to grow back into the shape/form it was or want it to be.

My Bougainvillea Barbara Karst in May.

This is the same plant at the end of October. You can see how it had filled in & was putting on a big show of color.

Can You Prune Bougainvillea in Winter?

I gave my bougies in Santa Barbara (USDA zones 10a/10b) their heaviest pruning in late January/February. This is the 1 which determined the form they’d grow in for the rest of the year.

Here in Tucson (zone 9a/9b) I wait until March or April because the evening winter temps are colder. Daytime temps are the same & can be warmer here but it’s the overnight temps which do the damage.

Bougainvillea is semi-dormant here in the colder winter months so I feel it’s best to leave them be.

My Bougainvillea Looks Dead. What Should I Do?

My bougainvillea looked dead for a few months. Some of it was but most of it wasn’t dead. The top & outer branches had been hit but I  let them be until the evening temps warmed. I waited until new growth started emerging on those branches & then pruned them.

Here’s how it looked at the end of March. Lots of dead branches with the majority of the growth in the corner of the house & garage (& a little at the bottom).

How Do I Protect my Bougainvillea From a Frost?

If it’s a low-growing variety, like my new Bougainvillea Blueberry Ice, you can cover it. Bougainvilleas growing in containers have the tendency to stay smaller so they’re easier to protect also. I use old sheets (which I take off in the daytime) to protect my more cold-sensitive plants but this frost protection fabric is an option & comes in a few sizes.

With taller varieties growing in the ground, it’s much harder to protect them this way. 3 things that will help them survive: don’t prune too late or too severely in fall, apply a good layer of mulch (2-4″) over the roots & wait until evenings have warmed to prune them in winter/spring.

What to Do After a Freeze: Bougainvillea Care

Nothing until early spring. I removed 1/3 of the branches on the right side of my Barbara Karst because they were most exposed & got totally hit.

I took out any dead branches in other parts of the plant. The branches which remained were pruned back to where new growth was appearing (on many the tips were dead).

After the tallest branches were taken down to around 7′, I aesthetically pruned. This included taking out the sucker growth. I like my Barbara Karst to provide a block in between the patio & driveway yet be a bit “airy” & not a dense blob. Bougainvillea blooms on new growth so it’s that big show of color I’m going for!

I did very little to my bougainvilleas in summer because the temps are high & the sun is fierce. I don’t think the plants like much pruning at this time, not to mention how uncomfortable it is for me. I trimmed out a bit more of the inside & pinched some of the tips, that’s it.

A close up of the blooms in early November. The color is much deeper than in the hot months. By the way, the actual flowers are the tiny white centers. The colored leaves are called bracts, the same as poinsettias.

How & When They Bloomed

The spring & summer blooms were lack luster compared to previous years. My Barbara Karst is the big bloomer & the other 3 follow suit in a lighter fashion. Flowering in the spring was light & in summer intermittent.

This has nothing to do with a freeze but I’ll mention it anyway. Tucson has hot, sunny summers  & the color of the bougainvilleas is faded at this time. When the temps cool, the color intensifies. My Barbara Karst is a gorgeous deep rose/red now. In the summer it’s much lighter & more washed out.

What I’ll do now in November:

Nothing too drastic. I’ll do a lighter prune on Barbara Karst to take the height down & the branches sticking out too far in. My Bougainvillea Rainbow Gold growing against the house is a different story. It’s currently growing above the roofline & I want to take it down by at least 5′.

My bougainvilleas are in peak bloom now (early to mid-Nov) & I don’t want to cut off all that floral goodness. I’m going to wait a couple of weeks & do the pruning. Our 1st hard freeze can come at the end of Dec. so I want to do the pruning at least 4 weeks before so the pruned branches have time to harden off.

My Rainbow Gold shooting up over the roofline

I learned to exercise patience and not to prune when the plant looked dead in January & February. The plants came back just fine but the big show of flowering didn’t start until mid-September or so.

How you prune your bougainvillea(s) is up to you. It depends on the type of bougie you have and the form you want it to be. 1 of mine grows as a shrub and the other 3 are espaliered against the house.

Bougainvilleas, like all plants, don’t grow much if at in the colder winter months. It’s a good time to resist the urge to do anything to them unless you live in a climate with milder evening temps. Just wait until the danger of bougainvillea freeze has passed before you spring into action with the pruners!

Need more bougainvillea goodness? Check out these gardening guides below!