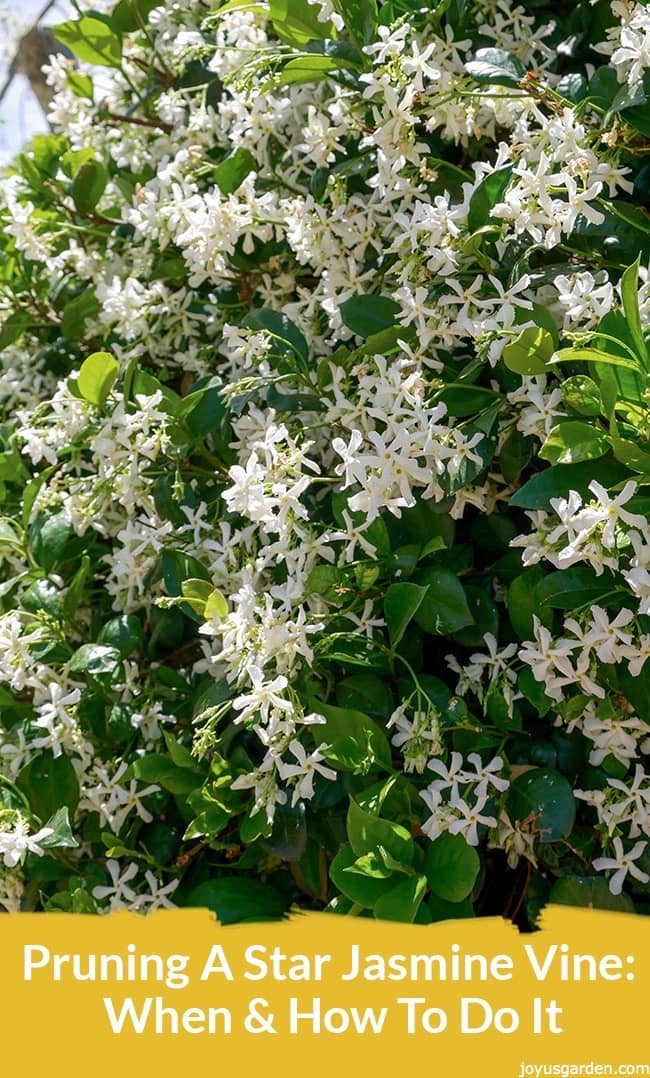 I moved into a new home last year and inherited a tall and somewhat overgrown Star Jasmine. It didn’t look horrible but I just wanted to do a little neatening up. Late this past winter a profusion of sweetly scented flowers appeared for weeks so it was well worth saving. This is all about pruning my Star Jasmine vine to lightly shape and rejuvenate it.

Star Jasmine, known as Trachelospermum jasminoides and Confederate Jasmine, can be grown in many different forms. I’ve seen it growing as a vine, a low border hedge, a ground cover, against a wall or fence, overt an arch, across an arbor, and spilling out of containers. It’s pretty forgiving when it comes to pruning. You can do it with your pruners, a hedge clipper or even an electric hedge clipper. The latter isn’t my favorite method but if you have a 35′ border of Star Jasmine, then I guess that’s the time economical way to go.

When to prune Star Jasmine:

The time to prune Star Jasmine is right after it’s finished flowering. I pruned mine in early June but could have done it in early May. This plant can be pruned fairly hard or on the light side, depending on the look you want.

You may need to prune 1 or 2 more times in summer/early fall depending on what form it’s growing in. You don’t want to prune a Star Jasmine too late in the year as it needs time to set those flowers so they can appear in late winter/spring.

This is the vine before pruning

How I pruned my Star Jasmine vine:

1- 1st of all, I batted the vine with a broom to knock most of the dead leaves off. There were a lot & this helps to keep them from falling on me when I’m pruning.

2- I started pruning at the bottom because the foliage was sparse down there. I basically tipped it to encourage filling in, just taking off a node or 2 of growth.

Head’s up: the stems of Star Jasmine emit a white, milky sap. It doesn’t bleed & drip like some of the Euphorbias do & it’s not as sticky. I’ve never had a bad reaction to it but just be careful if you’re sensitive to that type of thing. Some sites list Star Jasmine as non-toxic & others say it’s toxic. Never get the sap on your face.

3- I worked my way up the plant as far as I could without the ladder. Star Jasmine is a twining vine which needs something to attach or grab onto as it grows. Otherwise, it just falls back on itself & the new top growth smothers the undergrowth.

Head’s up: If you’re unsure as to how much to take off, it’s better to start with a light pruning. You can always go back & take more off. That’s exactly what I did in some spots with this plant – you’ll see it in the video.

4- I needed to take 6 – 10″ of the top growth off so the middle part of the plant could fill in. The stems which had twined onto each other were pruned back or taken out so the load could be lightened. Just like cutting thick hair with layers!

Here you can see where I pruned on the left side.

5- All the dead stems, most of them underneath, were removed.

6- After the pruning I gave the Star Jasmine a good, deep watering & top dressed it with another 3-4″ of compost to nourish & keep it from drying out.

After the pruning- not the most beautiful but I have hopes for it a year from now!

I didn’t want my Star Jasmine  to look scalped or like a chimney. It now looks a little awkward but that nice new springy green growth should be appearing by early winter and the plant will be on it’s merry way to filling in. Maybe I’ll prune it 1 more time in late summer – time will tell on that one. I look forward to a mass of sweetly scented, starry blooms next winter!

Happy gardening & thanks for stopping by,