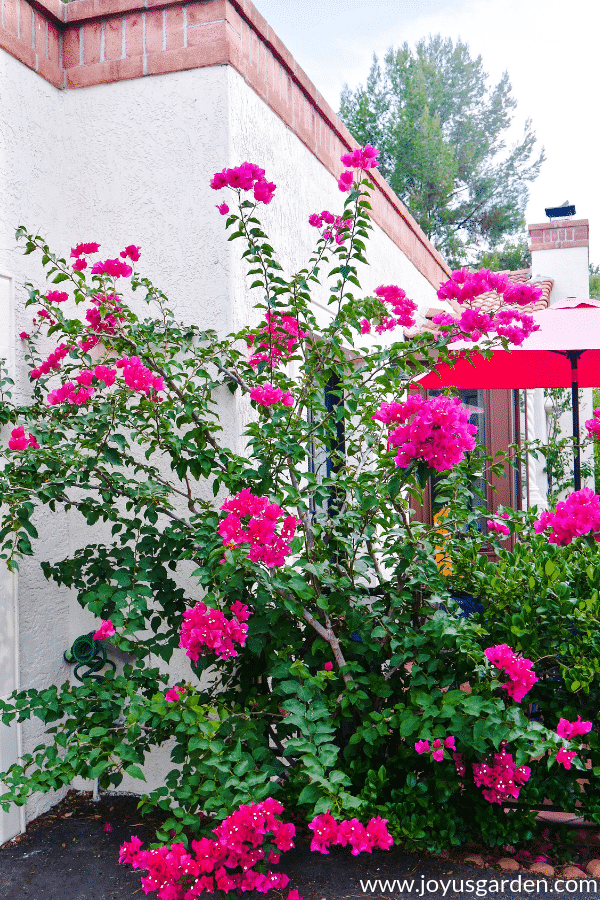 I did a post and video about bougainvillea after a hard freeze, part 1 and as promised, this is a follow-up about a month and a half later. Bougainvillea with hard freeze damage (as long as the roots aren’t affected) is manageable.

It’s mid-June, the sun is shining strong and the temperatures have heated up. If the new growth on my bougainvilleas isn’t appearing by now, it’s not going to.

I had previously taken out quite a few of the dead-looking branches. I left some be thinking new growth might appear given our May was cooler than normal. In short, no new growth was appearing at the ends of those branches.

Here you can see where the new growth appeared – about 18-24″ down on the stems. I pruned off all the dead ends just above where that new growth was appearing.

Head’s up: When the branches freeze and die like this, the thorns literally feel like needles. Use caution when pruning these out!

This is my Bougainvillea Barbara Karst in April of 2017. There had been no cold snaps that winter.

Here it is in April of 2018. It had been hit by a light freeze in early January but nothing like the hard freezes this season. It recovered earlier & faster than this year.

What I Did After Bougainvillea Hard Freeze Damage

I took out the dead branches. Those with new growth showing were pruned down to just above where that new growth was appearing.

The growth on the bottom which was hitting the driveway was pruned out.

Any green shoots which looked like they weren’t going to flower were taken out. By this time, they should be showing signs of producing blooms.

I thinned out more of the inner & lower growth. It’ll eventually be shaded out by the upper & outer growth. It gets too shaded to ever produce color.

I took a few more of those taller branches down a bit. Height is fine but I don’t want it to get so tall that I need a ladder to prune it.

I live at the end of a dead end street with very little if any traffic. This bougainvillea, which borders the driveway & the patio off of my kitchen, isn’t needed for privacy. The color it produces 7-8 months out of the year is the draw.

Head’s up! Before you start to prune, make sure your pruning tools are clean & sharp. It’s easier on you & better for the plant.

How you prune your bougainvillea and the look you want is up to you. I like mine, the Barbara Karst and the 3 against my house, to be light and airy. You might like yours in a tighter form like my bougainvillea glabra which I trained to grow up and over my garage in Santa Barbara.

By the way, these are the pruners I’ve used for over 25 years. They’re a little pricey but so well worth it.

Here’s the bougainvillea at the end of April of this year. Nothing but twigs & crispy foliage hanging on.

Another view of the loveliness.

How it looked in early May after the 1st pruning. I really thought new growth would appear towards the ends of some of those branches.

I took this photo a few days ago in mid-June. The pruning is all done for now. You can see how it’s a lot thinner on the right side because now the  Ligustrum (Privet) really shows.

A lot more flowers are coming on this bougainvillea so I’ll be enjoying the riot of color in a couple of weeks. The bloom isn’t at its peak yet. As I said, it’s mid-June now and in previous years the big show has started in April. That’s what happens when a tropical/subtropical plant is grown in a climate where winter temperatures can dip down.

If your bougainvillea has surface or cosmetic damage, it’ll eventually recover. You may have to prune a lot of damage out but new growth will appear. Just be sure to wait until the weather has warmed (especially the evenings) before you do any pruning. Prolonged freezes (more than 2-3 consecutive nights) will damage the roots and that’s a different story.

What I’ll do Next

Mainly leave it be. I don’t like to prune plants when the temperatures are over 100F.  It’s not good for me or the plants! I’ll thin out or down the occasional branch or 2 if needed.

I pruned my bougainvilleas in Santa Barbara more often during the growing season but the climate is less extreme than Tucson. In early September I’ll give mine a little shaping if necessary and then again in early November. You don’t want to prune your bougainvillea too close to a potential freeze date. I like to do it at least 4-6 weeks before so the plant can settle in.

This lovely bougainvillea specimen & the 1 you see below are growing in my community along with quite a few others. The gardeners pruned them back in mid-January which in my opinion is too early because we had 2 more hard freezes after that.

These bougainvilleas were over 7′ tall & cut back to 20″. They look like stubs with foliage shooting out! These 2 photos were taken in mid-June & the bougies should be much further along. They don’t need to be cut back severely every year.

It’ll be putting out a lot of new inner growth in a few weeks. My bougainvilleas growing against the house have always been thinner because they get less sun. If your bougainvillea got is showing hard freeze damage, just know it’ll grow faster when the temperatures warm.

Update: I’ve done a follow post & video 7 months after this one (in early November). You can see how bougainvillea comes back after a freeze.

What a learning experience this has been for me. But isn’t that what gardening is all about? It always teaches us something!

Here is more content to fulfill all your bougainvillea care needs:

Bougainvillea After A Hard Freeze

Answering Your Questions About Bougainvilleas

How To Plant Bougainvillea To Grow Successfully

Something’s Eating My Bougainvillea Leaves: What Is It?

How to Prune and Trim Bougainvillea For Maximum Bloom

Previous Post: « Anthurium Care: A Beautiful Blooming Houseplant
Next Post: Hoya (Wax Plant) Houseplant Repotting: When, How & The Mix To Use »