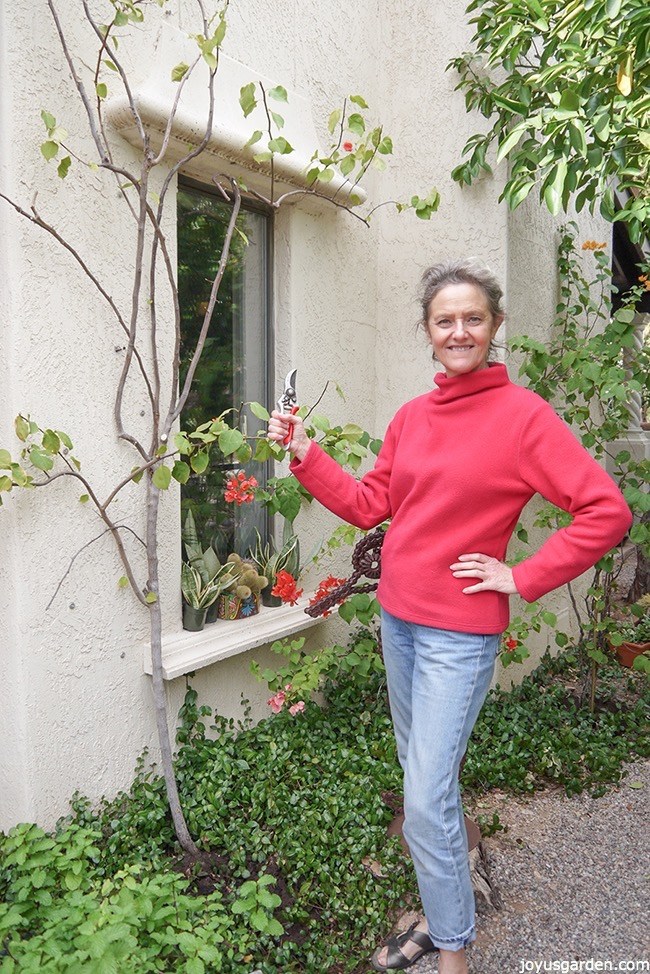 Here I go again, yet another adventure in bougainvillea pruning coming down the pike. I had 2 large bougainvilleas in Santa Barbara and now have 4 smaller ones in my new garden in Tucson

What I believe is Bougainvillea “Rainbow Gold” grows right near my front door and I’m not sure when it was last pruned. It’s a rangy vine greatly in need of a hard pruning and training

to spring into action so this overgrown bougainvillea doesn’t eat me alive every time I leave the house!

Here’s the bottom line with bougainvilleas: they bloom on growth so more pruning and pinching = more flowering.

This gives you an idea of what my bougainvillea (on the left in front of the chimney) looked like when I moved into the house. There was very little flowering action taking place & it was growing above the roof & into the walkway.

The hard pruning that I do in late January or into February is the big one that sets the shape this plant will be for the rest of the year.  Bougainvilleas need it as they’re vigorous growers. I do the pruning when the evenings start to warm a bit – you don’t want to do it if there’s any danger of below freezing temperatures (especially for a period of more than 3 nights) on the horizon.

You’ll see how I pruned & trained it:

What I wanted to accomplish:

– To keep the bougainvillea below the roof line & out of the eaves & walkway.

– Prune any branches away from the window. This is an east exposure & I want as much light as possible to enter the living room.

– Have a healthier plant. The foliage has always looked a bit pale & shall we say, “blah”. Hopefully between this pruning & composting it’ll come back strong.

– And most importantly, bring on lots of flowering. Why in the world have a bougainvillea if you can’t get any color!

Even though this bougainvillea was in the process of going deciduous at the time this pic was taken, the foliage had never looked all that great.

I start by standing back to really look at the bougainvillea

I figure out what I shape I want it to be & what I need to do. Every time I move the ladder I also step back to make sure all’s going well. It’s hard to get a perspective when your nose is in the plant!

time I move the ladder I also step back to make sure all’s going well. It’s hard to get a perspective when your nose is in the plant!

Working my way into the bougainvillea, I remove a lot of the smaller, scrawnier branches. I prune away whole branches, taking them all the way back to a main branch or the trunk. This will allow the new growth to come back stronger & healthier.

A close up of the center of the plant – I pruned out most of those smaller branches as well as the ones that crossed over.

The same goes for a few of the larger branches which cross over or stick out. Away they go.

I pruned all the remaining branches to take them in & stimulate that new growth. I want to bring on that flowering to keep the hummingbirds & butterflies happy too!

They need training, support & attachment. I undid all the previously attached branches & retied them. There are 2 branches framing the window which I still need to attach but I’m missing the hardware. That’ll be done within the next couple of weeks.

Here’s the finished project which I know, looks like a bunch of sticks. It may seem like I removed a lot, but believe, bougainvilleas grow back like crazy. I spread a 4″ layer of compost around the base of this plant to nourish the soil.

If you’re new to the world of bougainvillea pruning I have a word of warning: they have thorns, some species and varieties fiercer than others. Wear gloves and maybe even long sleeves. Pruning a bougainvillea is a project best not done in a bikini!

I want this inherited and overgrown bougainvillea of mine to be a riot of color come spring. By the way, I’ll be sure to do a post and video in a few months so you can see how it came back.  I’ll do 3 or 4 lighter prunings throughout the warm season, ending in late November.  Tip pruning, which I do when the fancy strike me, is key to that dense show of color. Here in the desert, I want a floral explosion!

Happy gardening & thanks for stopping by,

This was my Bougainvillea glabra in Santa Barbara, a real flowering machine for 9 months out of the year. It grew up & across my garage and got a major “WOW” from anyone who saw it!

Previous Post: « 9 Ideas On How To Nourish Your Soil Naturally
Next Post: Updating A Decorative Plant Pot With Painting »