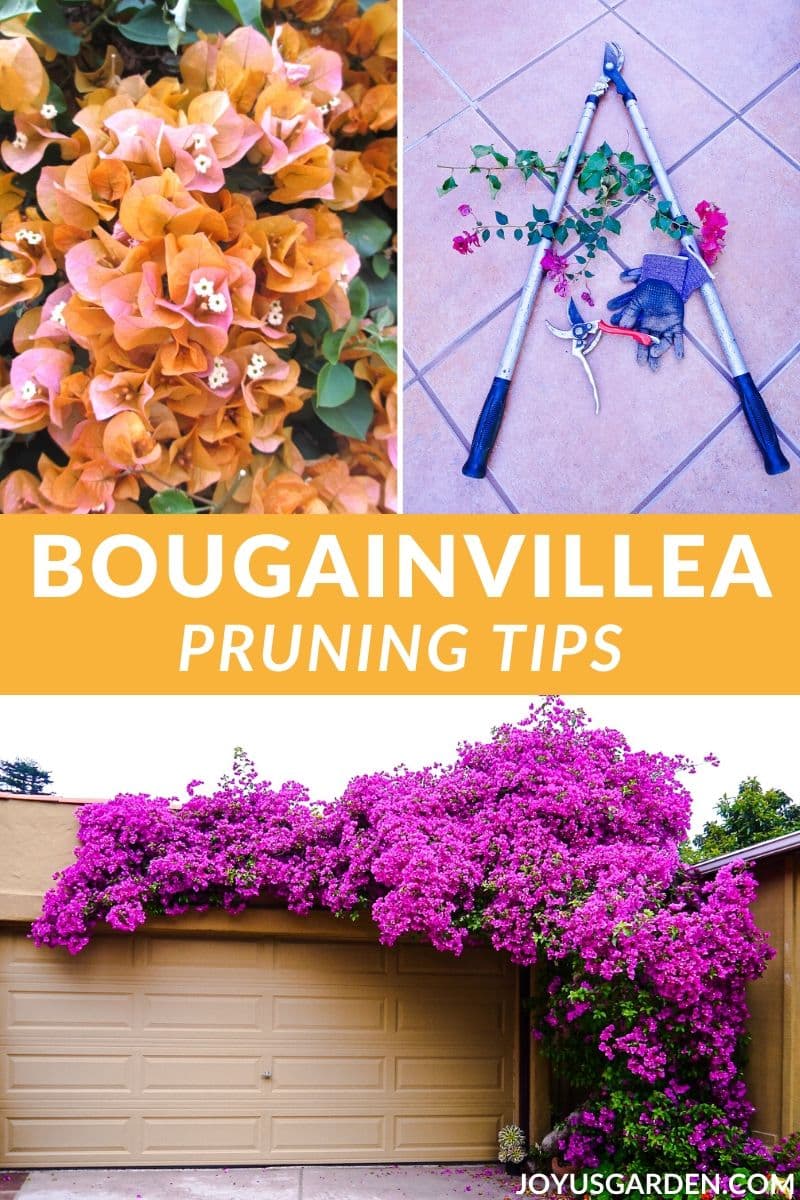 If you share my passion for gardening and live in a warmer climate, you’ll love bougainvillea. Here, you’ll learn plenty about bougainvillea pruning in late winter, spring, summer, and fall.

I’ve grown bougainvillea in 2 different climate zones for years now. Santa Barbara, CA (USDA hardiness zone 10a & 10b) and now Tucson, AZ (zone 9a & 9b). Not sure what zone you’re in? You can check your hardiness zone on a map.

It’s February, and time to start preparing for the warmer seasons to come. Bougainvillea is a vigorous grower and needs pruning throughout the year. How often, how severe, and the shape the plant will take on depends on where you live, what shape or form it’s growing in now and what shape to want it to take on.

I’ll tell you from experience, bougainvillea isn’t hard to shape but it can take some work!

I’m often asked how to prune a bougainvillea after an overnight freeze, the best time of year to do pruning, and the best care practices. I love to garden and share the results with you, so here is everything I’ve learned about pruning this popular landscape plant so far.

Pruning Bougainvillea After a Freeze

How to Prune an Overgrown Bougainvillea

I moved into a home in Tucson with an overgrown bougainvillea that needed a hard pruning. Here, you can see how I prune and train the plant to bring on a big show of flowers.

I had a large bougainvillea glabra which grew up and over my garage in Santa Barbara. See how I pruned and trained my bougainvillea. This is the big yearly pruning it gets in winter which sets the tone for the shape it’ll be for the rest of the year. When in full bloom, this bougie was an explosion of color!

Why have bougainvillea if it doesn’t bloom? Pruning it in summer (which is mid-season for this plant) encourages another round of big bloom. Here are a few pruning tips to help you out.

How to Get Bougainvillea to Bloom

Pruning this plant (especially the larger growing species/varieties like you see below) can be time consuming, but worth the adventure. My Bougainvillea Barbara Karst in Tucson had been pruned into a “green hedge/blob” by the previous owner. Here’s how I opened it up and got it to bloom.

How to Prune and Trim Bougainvillea For Maximum Bloom

Check out my Bougainvillea glabra in Santa Barbara – it’s a riot of color! Want to see this happen in your own backyard? Here’s how I prune and trim my bougainvillea for maximum bloom. Like with all these posts, there’s a video for you also.

When is the best time to prune bougainvillea?

1st, I’ll talk about the big pruning which determines which shape & size the bougainvillea would be for the season. This depends on your climate zone. In Santa Barbara (along the California coast zone 10a) I did that pruning in late Jan through mid-Feb, depending on when I got around to it.

Here in Tucson (the Sonoran Desert zone 9a) the days can be warmer but the nights are colder. Because we experience a handful or 2 of evenings dipping below 30F, I wait until mid-March through early April to do the big pruning on my bougies.

In addition, I prune after each big flowering throughout the season. I pruned more extensively in SB than here in Tucson because the temps don’t start cooling until the end of Sept. When the temps are over 100F, I pretty much leave my bougainvilleas be except for a little tip pruning. Pruning in that heat isn’t good for the plant, nor for the pruner!

How often do you prune bougainvillea?

I touched on that above. In Santa Barbara I pruned my bougainvilleas 4 or 5 times during the season whereas as here in Tucson, it’s more like 2 or 3.

This also depends on what size, shape, & form your bougainvillea is. For example, a bougainvillea tightly shaped is going to require pruning more often than 1 growing in a more free form fashion.

How do you shape bougainvillea?

It depends on what type of bougainvillea you have & what shape you want it to take on. Mine which grew up & over my garage in Santa Barbara was Bougainvillea glabra & it reaches 20’+ tall.

My Bougainvillea Barbara Karst (which reaches 25′) next to my garage here in Tucson never gets that tall because a freeze usually knocks it back. When I moved into this house, it had been pruned as a 5′ hedge & never flowered.

I let it grow out, opened it up, & now it grows in an open shrub form. It blooms on the regular which is what we all want. And, I keep it under 8′ tall so it’s easier to prune.

When should bougainvillea be pruned?

I do the big pruning in late winter/early spring. Throughout the season, I prune to shape & encourage the next round of blooming.

In fall, I lightly prune to shape so it isn’t a mess going into winter. Tucson can get its 1st freeze in late Dec. so I make sure I do that pruning by mid-Nov. In coastal California where a freeze is rare, you can do that pruning into early to mid-Dec.

Does bougainvillea need to be cut back?

In my opinion, yes. I’ve seen bougainvillea which hasn’t been pruned at all & it’s a ratty mess. You don’t need to cut it back hard unless it’s severely overgrown. Otherwise, a light or moderate pruning will do.

How do you increase bougainvillea flowering?

Saving the best for last! It’s important to know that bougainvillea blooms on new growth. If you see a tall, overgrown, unpruned bougie that’s why all the blooms are at the very ends.

Bougainvillea needs at least 6 hours of sun to do a full out bloom. Plus, they love warmth so if it’s not getting these 2 things, the bloom won’t happen or will be sparse.

So, even a tip prune (pinching) will encourage new growth & hence blooming. And that’s why you want to prune or lightly prune your bougainvillea after each big round of flowering. It’ll bring on new growth & those blooms we all want.

If you love to create a beautiful garden like me, then you’ll really enjoy the long and abundant periods of flowering which bougainvillea delivers.

Previous Post: « Philodendron Imperial Red: How To Grow This Beautiful Tropical Houseplant
Next Post: Seed Starting Mix: A Recipe To Make Your Own »