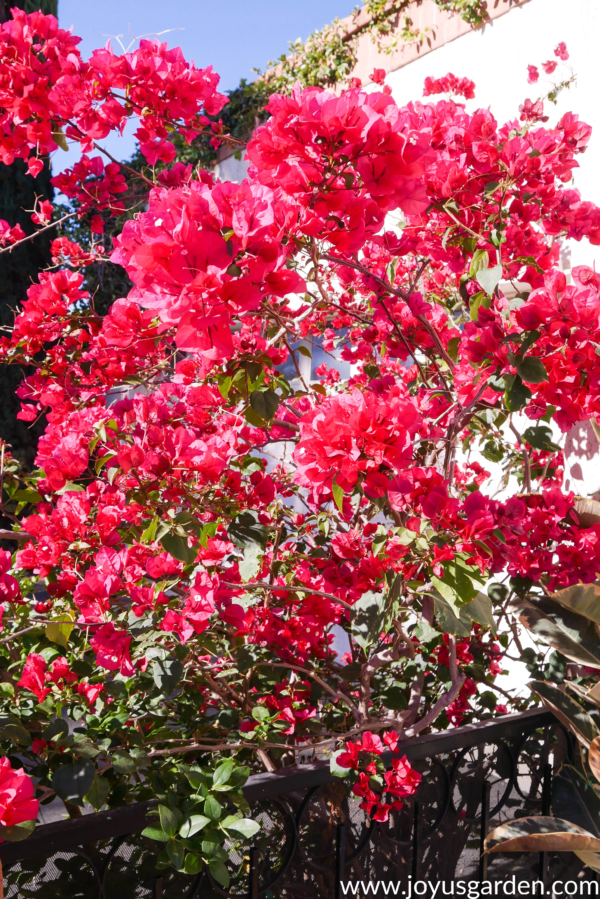 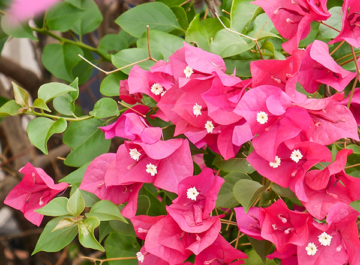 Let’s face it, why have bougainvillea if it doesn’t bloom? In terms of foliage and easy maintenance, there are landscaping plants I like much better. Show me the color I say!  Pruning bougainvillea in summer, which is mid-season for this plant, encourages another round of bloom.

The one I’m pruning here is Bougainvillea Barbara Karst.  It had been pruned into a hedge by the previous owners and showed very little or any blooms. I’ve lived in this house in Tucson for 2 years  and have pruned it into a form which is pleasing to me. I need to prune it 3 times a year now – February, July and the end of November. The 1st  are to shape and stimulate flowering and the last one in late fall is very light, just to clean up any dead or funky growth.

I’ve gotten comments like “why is my bougainvillea not blooming” or “my bougainvillea was blooming was blooming when I brought it home but now it’s not”. There are multiple answers for both (the most fundamental is that bougainvilleas need full sun and warm temperatures to flower successfully) but there are only 2 reasons I want to address in this post.

1.) Different varieties of bougainvilleas bloom more & for a longer period of time than others. My Bougainvillea Barbara Karst blooms more than my other bougainvilleas. It puts out a good bloom for 8 months & a much lighter for 3.

2.) Bougainvilleas go through a rest period after they bloom.  For some varieties, it’s longer than others.

Bougainvilleas need full sun for at least 6 hours to put out their best bloom.

Just so you can get an idea, this is the bougainvillea in full bloom in end of April.

Pruning stimulates new growth which stimulates flowering. That’s why on older, taller bougainvilleas which haven’t been pruned in a while all the color is at the ends an/or at the top. You can see how I pruned my vibrant magenta/purple Bougainvillea glabra in Santa Barbara to grow up and over the garage. It was much bigger and denser than this one and garnered many oohs and aahs when it was in full bloom.  More pruning was required on my Bougainvillea glabra than on my Barbara Karst here in Tucson.

This is how it looked before the pruning on the driveway side. I didn’t take an after pic but you can see how it turned out can in the video.

My Felco #2 pruners. These have been my go to’s for almost 30 years now & I wouldn’t garden without them. I have the very same pair for all that time & haven’t replaced any of the parts.

Fiskars snippers – these are my go to’s for tip pruning the softer growth at the very ends.

Zenport multi-sharpener. Oh, how I love this for sharpening my pruning tools. It’s light, easy to hold, & does the trick in no time flat. You can see how I use the sharpener in this video around the 7:40 mark.

Gloves. As much as I love nature, I have no desire to have dirt under my fingernails!

Watch those thorns – bougainvilleas have a lot of them. Enough said about that! Also, be mindful of your eyes. Besides the thorns, a lot of dirt & “dregs” will most likely fall out when you’re pruning.

The left side which I started on. Definitely thinned it out quite a bit & took it back away from the house & garage door.

How I Pruned This Bougainvillea:

Make sure your pruners are clean & sharp.

Take a good look at the plant.

I step back & look at the plant. Any dense spots? Sucker growth? Dead or weak growth?

Begin with the left side of the plant.

Starting with the left side (always have with this plant & who knows why), I take out any dense growth which usually is overlapping branches. You can start wherever it makes sense to you.

Take out any dead, weak or spindly branches along the way.

Don’t miss the parts that are touching the ground.

Anything growing too close to the ground comes out too. Foliage encroaching in the path of the garage door & into my patio dining area on the other side is pruned back also.

Once I get in pruning groove, the rest falls into place. This bougainvillea is now pretty much the way I want it but I did take off a few of the taller branches. I like being able to prune it without a ladder.

I cut just a handful (8-12) of branches back by half.  This stimulates more inner growth to appear off those branches. If you’re going for a dense look in the middle, go for it. I like this bougainvillea to have a looser more open form which is why I go sparingly with this step.

The ends I tip prune so flowering is a bit denser.

I go through & tip prune the remaining branches. This pruning of the ends by 1/2″ – 5″ causes the flowering to be a bit denser which is a look I like. It’ll also cause more inner foliage growth so that’s why when after I’m done with the pruning, this bougainvillea looks a little thin. It’ll fill in a bit within the next few weeks.

This Barbara Karst of mine was putting out a lot of flower buds when I did this pruning. In 2 weeks time, it’ll be starting to put out a big bloom. Last year it was showing a lot of colors right on through to the end of November.

The flower color of a bougainvillea which changes as the temperature & heat changes. My Barbara Karst is a much deeper, more intense pink/red in the cooler months. In the hot more intensely sunny months, it’s more washed out. The lead photo was taken in March so you can see how much more vibrant the color & overall flowering is in late winter/early spring.

Not 1 of the prettier photos I’ve taken but this gives you an idea of some of the types of branches I took out. Thick growth, stubby branches, mostly bare branches & funky curved growth.

Let your bougainvillea be in the colder months. This one got hit by a cold snap last December. I didn’t prune it until early March (could have done it in late February but we know how that goes!). You don’t want to stimulate tender new growth only to have it freeze.

I love the location of this bougainvillea because we see it when driving up into the garage and also from the kitchen and patio. Dining alfresco with a backdrop of bright pinkish/red – so fine!