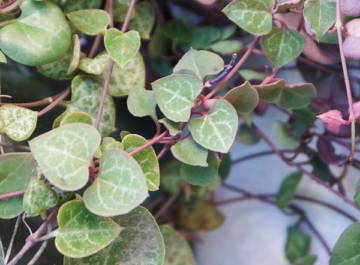 Oh, String Of Hearts, we’ve been through a lot together. Do you ever feel that way about any of your plants? This trailing plant had gotten so tangled and long that I had to cut it back completely and restart it. This is all about planting String Of Hearts, aka Rosary Vine or Ceropegia woodii. I’ll show you how I did it and the soil blend I used.

This plant came with me when I moved from Santa Barbara to Tucson and got tangled from the get-go during the 9-hour car trip. I put it in a pot with a String Of Pearls plant and a few String Of Bananas cuttings, and it got even more twisted. That, combined with the fact that it was grown outdoors, warranted a significant cut-back. Like all the way.

Planting a String Of Hearts Vine

I cut the long, tangled trails off this plant all the way down to the tubers and then dug those tubers out of the hanging pot. String Of Hearts grows by tubers which sit close to the surface of the soil. The tubers were transferred into a 4″ grow pot filled with succulent and cactus mix. This method of propagation worked the best for me – the String Of Hearts came back with a bang.

This is what was left of the plant after I cut the trails all the way back.  A bit of stems & the tubers.

Here’s the plant 1 month later – fresh new growth was emerging from the tubers.

An equal blend of succulent & cactus mix & coco coir would make your String Of Hearts very happy. Or, a combo of half cymbidium orchid & half succulent mixes would be just excellent too. It’s essential to make sure the mix drains really well so the tubers don’t rot out.

1/3 succulent & cactus mix, 1/3 coco coir & the remaining 1/3 a combo of orchid bark & charcoal. I sprinkled in a handful of compost too & later topped it with a 1/8″ layer of worm castings. Read about my worm compost/compost feeding here.

I gave my String Of Hearts a thorough watering right after the planting and moved it into the garage. It stayed there for a week or so and now I have it on a bookcase in my living room. As you see in the video, I pruned the trails again but this time not all the way. This plant grows so fast here I’m convinced that I’ll be having at it with my trusty Fiskars Pruning Snips every few months!

The pot in the front was grown from cutting the plant back to the tubers & forcing out all new growth. The one in the back was started from cuttings. For me, the cutting back was much more successful.

Here’s the String Of Hearts after the planting. All that nice new growth came back after just 2 months.

Tips for Planting String of Hearts

Spring & summer are the best times to plant, transplant or repot a String Of Hearts. If you live in a temperate climate like I do, then early fall is excellent too. Just avoid the winter months because the plants are resting. Hibernating like bears!

When planting String Of Hearts, don’t sink those tubers too far down. They’re aerial tubers which need to grow closer to the surface of the soil.

This plant grows fast. It also tangles easily & can get straggly over time. Don’t be afraid to cut your String Of Hearts all the way back (just not in late fall &/or winter) to stimulate fresh new growth. The trails on mine had grown to be 6′ long, so it was time.

I’ve found that String Of Hearts doesn’t seem to have an extensive root system. Also, it’s a plant which prefers being slightly tight in its pot so don’t rush to repot it. I’ll leave this 1 in this yellow pot for at least 3 years.

When planting, don’t go up too large in pot size. This plant doesn’t need the room.

Just for fun – the unusual flowers of a String O Hearts. Mine bloomed 2 months after being totally cut back. Now that’s fast!

The String Of Hearts or Rosary Vine is a trailing houseplant which can be grown outdoors year-round in temperate climates. There’s also a variegated form which has a touch of pink if that’s your thing.  I’ve decided to keep mine in the house so that the wind doesn’t hopelessly tangle the trails again. That said, I’m sure I’ll be pruning it again in the not too distant future!

Previous Post: « Repotting Peperomia Plants (Plus The Proven Soil Mix To Use!)
Next Post: How to Care for the Glorious Schefflera Amate »