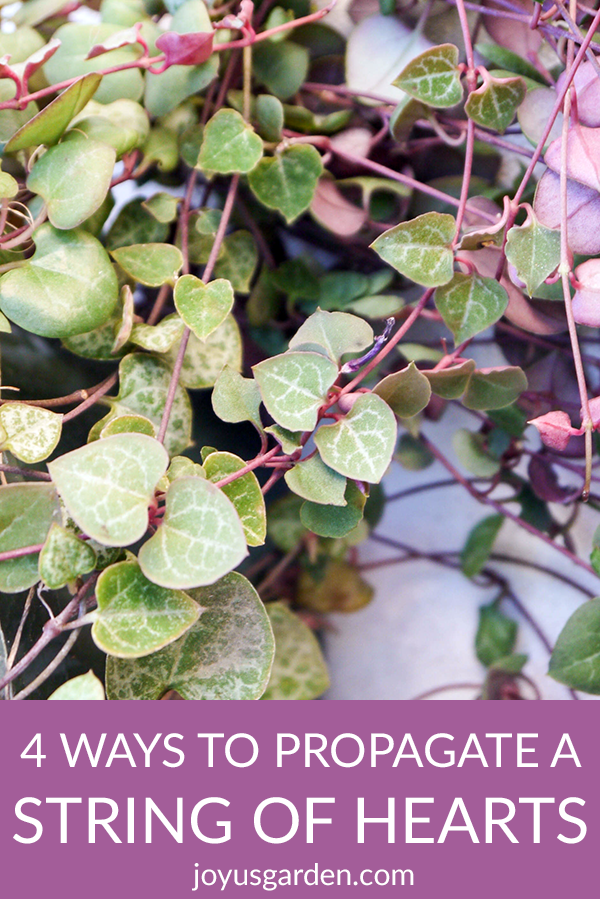 My String of Hearts plant had gotten tangled and grown too long. It was time to cut it all off and propagate. Here are 4 ways to propagate this Rosary Vine.

My String Of Hearts vine traveled with me, along with numerous other plants and 2 crazy kitties, in a very packed car when I moved from Santa Barbara to Tucson a couple of years ago. We all survived the 9+ hour trip (barely!) and boy oh boy has my String Of Hearts grown like a weed here in the toasty, sunny southern Arizona desert.

It was time for a major haircut and I actually ended up cutting off all the trails. So this my friend, is a great time to show you 4 ways to propagate a String Of Hearts plant and reveal which was the most successful for me.

Propagating a String Of Hearts Plant

My String Of Hearts shared a hanging container with my String Of Pearls and String Of Bananas. It’s fancy botanical name is Ceropegia woodii and it also goes by Rosary Vine or Chain Of Hearts. I pruned it every month last summer but it grew back fast every time. It had gotten tangled in the wind, the top 12″ of the stems were bare and the plant was showing signs of mild sunburn. I wanted to rejuvenate the plant and give it a new lease on life.

Here I completely cut back my String Of Hearts & show those propagation methods:

This is how the plant looked 7 months ago – those tangled trails were at least 6′ long.

Here are the stems I cut off 1 1/2 months ago. This is the underside where the foliage was nice & green. The side facing out to the morning sun was a bronzy-red. Foliage color changes when plants are environmentally stressed.

How to Propagate of String of Hearts

1.) By Stem Cuttings in Water

I ended up composting all the stems that you see in the picture above. They were just too tangled to deal with. 4 months ago I had pruned this plant & put the cuttings both in water & mix.

For me, the cuttings in water-rooted better. I had meant to do this post & video earlier but waited until late winter. I decided to completely cut back this String Of Hearts & take the root ball out of the hanging pot. These cutting stayed in the water for quite some time but 80% of them developed quite a nice root system. They are now in the same pot as the cuttings in the mix.

The cuttings in water. I changed the water every 2 weeks & made sure it covered the roots. Don’t have the water level too high up on the thin stems because they could rot out. By the way, little tubers had started to form at the base of the stems which had rooted.

2.) By Stem Cuttings in the Mix

This method was the least successful for me. After taking the cuttings, I put them directly in the succulent & cactus mix. You can root stem cuttings in a mix formulated for propagation. Whatever you use, make sure it’s light & aerated so those baby roots can easily emerge. Some people like to dip the ends of their cuttings in a rooting hormone before planting.  That’s your call.

I put the cuttings in my utility room where it’s nice & bright because of a skylight but there’s no direct sun. I watered them once a week, keeping the soil slightly moist. When the weather warmed at the end of February, I put them outside in the bright shade. As the temps have warmed above 90F, I now water these cuttings twice a week. About 40-50% of the stem cuttings in mix survived.

This one is my winner. I pruned my String Of Hearts every month last summer and chopped off 3′ of it in October so I decided starting over was best. I filled a 4″ pot over 3/4 of the way full of succulent and cactus mix, laid the mass of tubers in & barely covered them with more mix. This was watered every week & kept in bright shade.

Here’s what those String Of Hearts tubers looks like – they basically grow in a clump but can easily be separated.

Fast forward to a few weeks later. I was having my house painted and put the majority of my plants in the garage for a week. It was important to me to protect my precious babies! I noticed that after the pot with the tubers had been in the garage (which has a few windows but is high light by no means) for 5 days new growth was starting to appear. I’m not sure if they liked being in the garage better or if it was just coincidence.

4.) By Tubers with the Stem

I’ve never this tried but know for certain that it works. You can put the tubers that develop at the on the stems at the base of the leaves and pin them down into a separate pot with the mix. The stem is still attached to the mother plant and you cut it off after the tuber has rooted. It’s the very same method I use when propagating hoyas – you can find more details in the highlighted post under method number four.

I’m pointing at a tiny tuber. This is what you pin down into the mix.

In water good, in mix fair & by tubers best. The cutting back completely & letting fresh, new growth emerge from the tubers got my vote because the plant wasn’t looking its best & really needed it.

Oh that fresh new growth appearing from the tubers is just what I want.

I’ll repot my rejuvenated String Of Hearts or Rosary Vine when it gets big enough. I’ve decided to keep the plant inside so that that the wind doesn’t hopelessly tangle the trails again. I have way too many houseplants but why not add 1 more. I’m sure it won’t be the last!

Previous Post: « How & Why I Pruned My Trailing Fishhooks Succulent
Next Post: How To Grow A String Of Bananas Plant Outdoors »