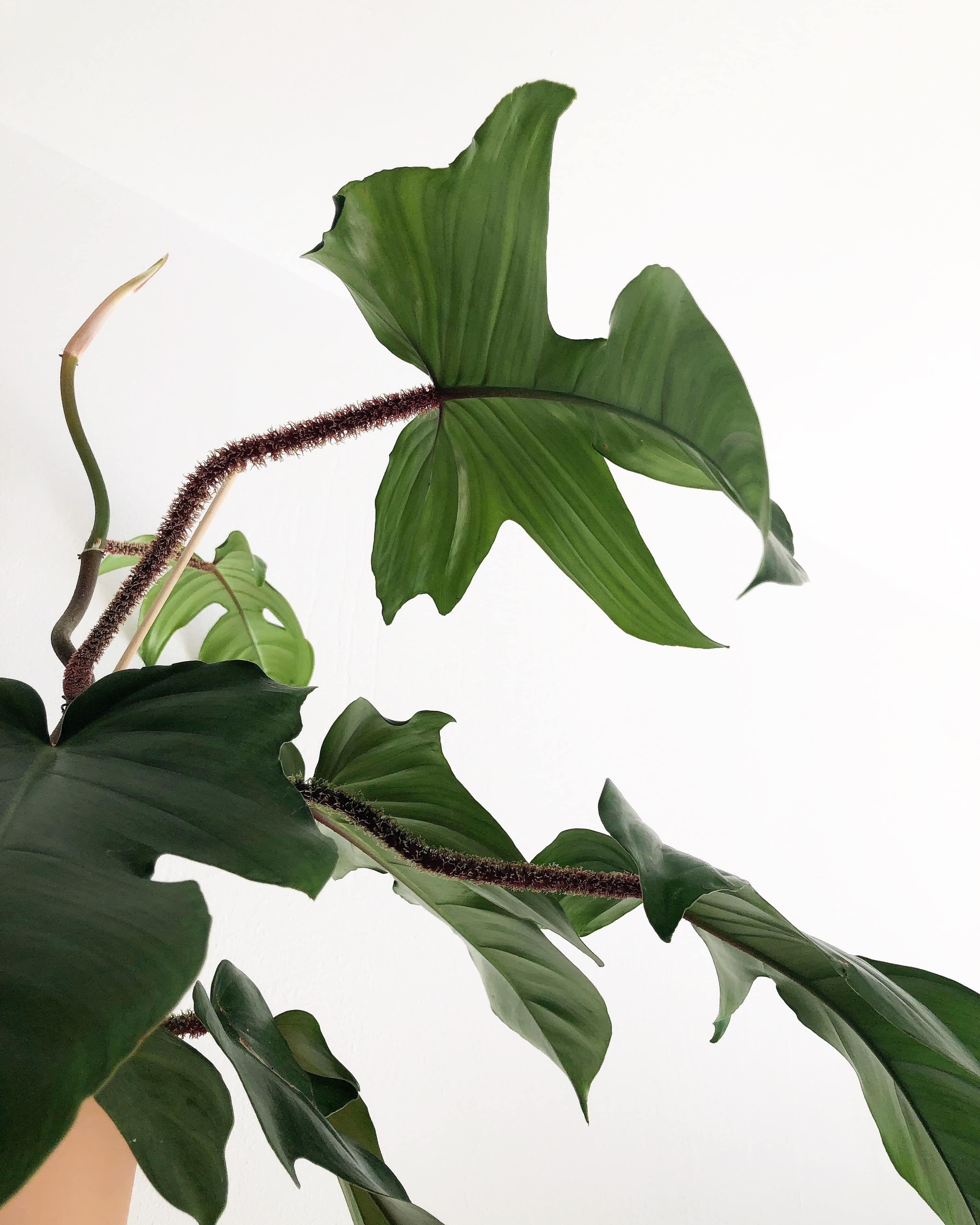 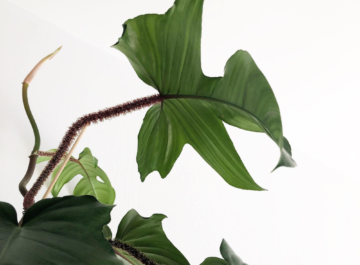 If you enjoy tropical plants and growing them indoors, then you’ll love this rare find. Here is everything you need to know about Philodendron squamiferum care.

If you’re a fan of tropical plants and pretty foliage then you’ve no doubt heard of the genus Philodendron (and probably already own a few of these showy houseplants). There are so many different Philodendron varieties and cultivars out there it’s hard to resist the temptation to try and collect them all!

Let’s discuss one of the less commonly available Philodendron species: Philodendron squamiferum. Although you might have a bit more trouble finding this one than the average houseplant, it’s definitely worth the detective work. And it’s easy to grow, too, so once you’ve got your hands on one it’ll be a breeze from there on out.

Philodendron squamiferum is somewhat similar in appearance to its cousins Monstera deliciosa as well as Philodendron bipennifolium and pedatum, with a climbing growth habit and lobed leaves.

Luckily there is really no way to confuse this species with other tropical aroids if you look closely enough. It has a very distinctive feature: its stems are covered in fuzzy red ‘hairs’, also known botanically as pubescence.

Although a Philodendron squamiferum usually won’t be too large when you buy it, maybe 15” tall, it’s an aroid epiphyte with the ability to reach impressive heights. Even a single leaf on a mature plant can reach 18” in length.

There is really no limit to how tall a Philodendron squamiferum can grow, since in its native rainforest habitat in French Guyana, Suriname and Brazil it vines its way up very high trees.

A young Philodendron squamiferum might look nice on a table that leans against a wall, with a small trellis for it to grow up on.

Once the plant matures a bit it’s probably more suitable as a floor plant, since you eventually need a pretty big trellis or totem to keep up with it.

For anyone scratching their head right now wondering how they’re possibly going to fit an adult squamiferum into their home, no worries. This isn’t like a Monstera deliciosa and won’t take over your house over the course of a few months: Philodendron squamiferum has a relatively modest growth rate.

Like other aroids, Philodendron squamiferum naturally attaches itself to trees in the rainforest, creeping upwards towards the light. Direct sun is blocked out by the canopies in these habitats, meaning the species has not evolved to withstand direct sun.

The above doesn’t mean this is a plant that can grow in a dark room. It should still receive medium to bright indirect light. Too little light will lead to lack of new growth and can also cause problems with root rot if the soil stays wet for too long.

Philodendron squamiferum is a bit more sensitive to overwatering than many other aroids and it doesn’t like its soil constantly moist. Instead, you should let the top few inches dry out before watering again.

I can’t give you an exact watering schedule for any houseplant because so much of it depends on the environment you grow it in as well as of the season. Assuming your squamiferum is in a bright spot and grown in a loose soil medium as it should be, you’ll probably be watering around once every 6-7 days during the summer months and once every 11-12 days outside of the growing season.

This is a jungle species so it does like things humid, although it has proven to be relatively resilient even if growing conditions aren’t ideal.

For those with a hygrometer (device to measure humidity that comes in very handy for houseplant enthusiasts): try to aim for about 40%. That’s also a nice humidity level for a human anyway, at least during the warmer months. Much lower and both you and your squamiferum will start to feel uncomfortable. The plant might develop brown leaf tips while you will notice dry skin, chapped lips and more frequent colds.

Luckily there are plenty of tricks to make things more comfortable for your Philodendron squamiferum and possibly also for yourself. Running a humidifier is very helpful. Grouping houseplants together is also a good option, as is placing your plants on a dish with pebbles and a layer of water.

As with many houseplant care aspects, we need only look at the plant’s natural habitat to figure out what temperature it requires in our homes. The rainforests that Philodendron squamiferum naturally grows in are pretty toasty and this species definitely won’t appreciate being cold.

You should keep things above 50 °F in order for this aroid to thrive and ideally no warmer than 77 °F. That’s the great thing about tropical houseplants: they’re comfortable when you are! Room temperature is perfect for this species.

As mentioned earlier, Philodendron squamiferum is not the quickest grower. As such, it’s not the heaviest feeder either. That doesn’t mean you should never give yours some plant food, though.

During the growing months (spring and summer, maybe into early fall), water the plant with a dash of fertilizer about once every 1-1.5 months. If you’re not sure what kind of plant food to use, try keeping things simple and going for a fertilizer made for Philodendrons.

After summer you might do well to give the soil a good flush just in case excess salts have built up. This avoids fertilizer stress on the roots, which can manifest itself in unsightly leaf spot.

Because Philodendron squamiferum is naturally an epiphyte, its roots were made for gripping. The species won’t like being suffocated in dense media like pure potting soil: you’ll need something much lighter and coarser.

A nice mixture for a Philodendron squamiferum would contain a moisture-retaining element (like sphagnum moss or coco coir) as well as bits with a larger particle size to allow excess water to escape, like perlite. You can also add some pine bark fines (partially composted pine bark).

Tip: Nell’s DIY succulent mixture is a good choice. You can replace the coco chips with pine bark fines if you really want to make it fancy. Some stores also sell special aroid mixes for those who don’t want to mix their own soil.

If you find your Philodendron squamiferum is drying much more quickly than usual or not growing as well anymore, it’s probably time to give it a repot.

You won’t need a huge planter because, as mentioned, not much of the action takes place in the pot for this epiphytic species. Just make sure the container offers good drainage; a standard plastic nursery planter works well and can be hidden in a decorative pot.

Be sure to repot houseplants during the growing season, which is spring and summer.

I don’t see much need to prune a Philodendron squamiferum, with two exceptions.

If your plant has suffered a bit due to low humidity or another issue and it has some ugly leaves, you can remove those for aesthetic reasons. Houseplants also naturally abandon some of their leaves, especially the bottom ones. You can pick yellowing and dead ones off.

Another reason you might want to prune a Philodendron squamiferum would be just pure size control. If you don’t want your specimen to outgrow its trellis or plant totem, you might eventually have to grab some clean pruning shears or scissors and snip off an unruly vine or two.

Once you’ve given your squamiferum a haircut, you obviously don’t want to lose perfectly good bits of such a lovely plant. Move on to the next paragraph!

The propagation process for Philodendrons like this one is usually a breeze.

You can take a stem cutting, which is what you end up with after a size control prune. It can just be stuck into a separate planter with aroid soil. As long as they have a root node or two they’ll grow just fine. Water propagation also works well.

Philodendron squamiferum is a great candidate for air layering, which is when you locate a root node and trick it into thinking it has touched soil. This is done by wrapping sphagnum moss around this part of the stem and wrapping it with a plastic bag. This stimulates roots to grow, after which you can remove this stem and pot it up.

Honestly, these guys are usually pretty problem-free. A few issues you might run into are:

Toxicity to Pets and Children

Yup, sorry. Philodendrons, like other plants in the Araceae family, contain insoluble calcium oxalate crystals. Curious pets and kids that stick any part of the plant into their mouth will experience a very nasty burning sensation.

You may also enjoy these houseplants too!

Mari is the author behind Houseplant Central, an informative website dedicated to helping houseplant enthusiasts keep their greenery happy and healthy.

Originally from The Netherlands but living in Spain, she spends her days writing about plants in the company of two noisy parakeets and extensive houseplant collection.