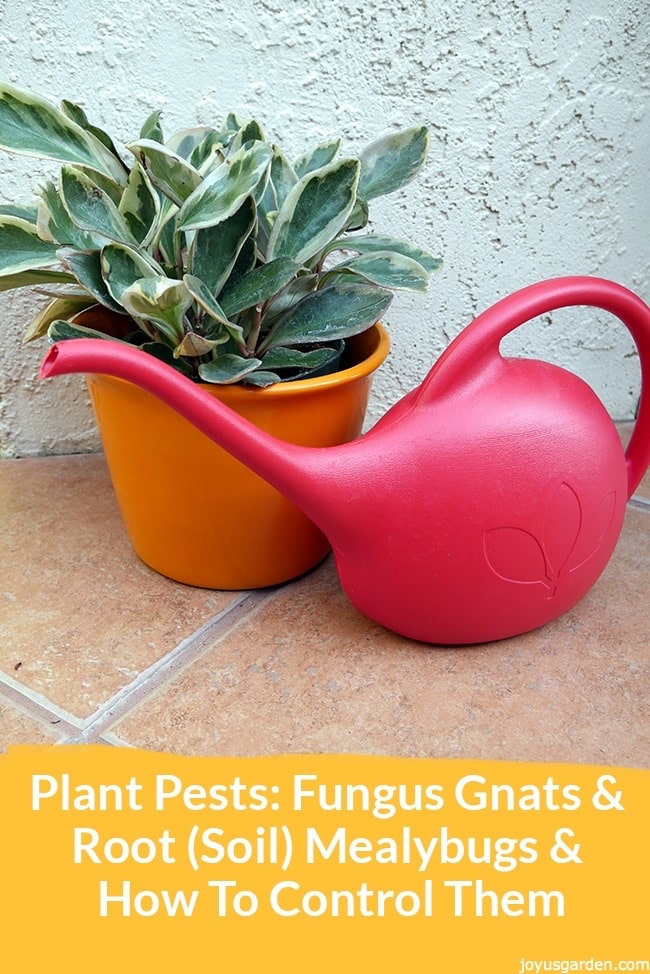 Plants and pests go together like peanut butter and jelly. If you have the 1st, then the later will make an appearance at some time. I’m more familiar with and have seen these pests infesting houseplants more than plants in the landscape. What I’m talking about here is fungus gnats and root mealybugs (some call them soil mealybugs) and what you can do to control them.

This is part of a plant pest series which I did about 4 months ago and then dropped the ball on these 2. Oops – better late than never I say! In my professional gardening days, I encountered aphids and mealybugs, spider mites and whiteflies, and scale and thrips much more often. Unlike all of those which hatch on the plant itself, the fungus gnats and root mealybugs hatch in the soil. The control for them is very different.

I’m going to start with fungus gnats. The adults, after hatching in the soil, fly around and you can see them. They like moisture, humidity and rich matter like compost, decaying leaves and peat moss.  Although they can be found outside around drains and areas with poor drainage, my limited experience with them is more around houseplants. In the home, they’re a noticeable annoyance.

I’m not going into the lifecycles of either fungus gnats or root mealybugs. All I’ll say on this subject is to catch them early on because they breed like crazy. If you wait, they’ll be much harder to control.

They’re teeny, tiny blackish, greyish flying insects. 1/4″ is the largest they get largest they get, but most are much smaller than that. The pictures of fungus gnats that you see are all magnified which is why I don’t have one taken by me. I’d need a super telephoto lens for that but you can see some pics here.

They oftentimes get confused with fruit flies  but they’re 2 separate pests.  Fruit flies hang out in the kitchen around rotting fruit and vegetables and are stronger fliers and slightly bigger than fungus gnats. Fungus gnats stick pretty close to the plant they’ve hatched out of.

Adult fungus gnats are short lived. They fly around for a few days and then die. What makes them super annoying is that if they get close to you, they like to fly up your nose and in your ears and mouth. Remember – they like moisture!  They lay eggs near the surface of the soil, larvae appears which hatches into the flying adults and then the whole cycle starts over again.

Symptoms damage has been done: The plant looks limp, weak growth and can loose foliage if the infestation is bad.

How to prevent fungus gnats: Ease up on the liquid love. Fungus gnats thrive when houseplants are over watered. 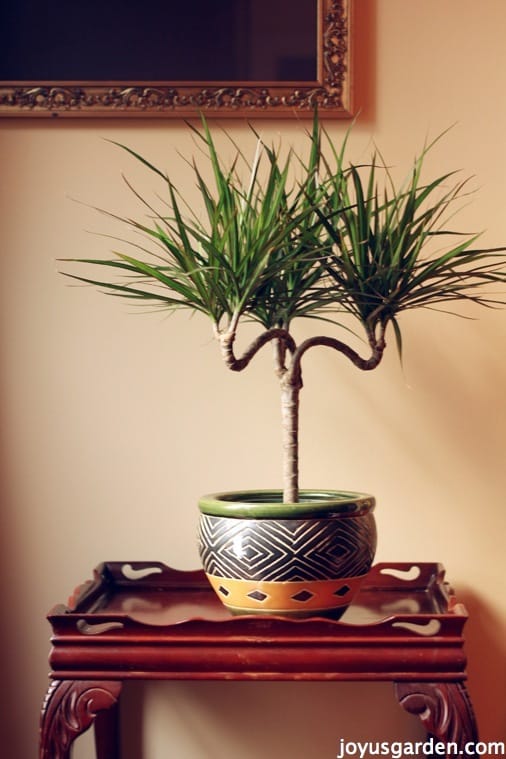 In my short-lived career as an interior plant care technician, we dealt with a lot of fungus gnat infestations. Most of the plants had moss as topdressing, which keeps it from drying out even more. Here’s what we did:

Removed the moss & took it away in a garage bag in case any eggs or larvae had gotten into it.

Let the plant dry out as much as possible. Sticky yellow traps were placed in or next to the plants to trap the adults. You can use them in your home if they’re driving you crazy!  If the clients were really complaining about the fungus gnats, we got right to the drench but I recommend the drying part 1st because the plant is probably already wet at this point.

Mix up a solution of 1 part pure hydrogen peroxide (with no additives) to 4-5 parts water. Mix well and water the plant, making sure to thoroughly drench all parts of the soil. The hydrogen peroxide will fizz; that’s what kills the larvae and the eggs.

Other things I’ve heard to be effective (but have never tried):

Mosquito dunks in granular form sprinkled on the surface of the soil & watered in.

A special type of BT (called Bti) used as a drench.

Neem oil used as a drench (this gets mixed reviews).

Nematodes. These are beneficial insects that when released into the soil, start to eat the larvae.

Root mealybugs are much harder to detect because they’re in the soil and you don’t see them unless you take the plant out of the pot. Sometimes there might be a few lurking near the surface but they like to hang out down below feeding on the roots. 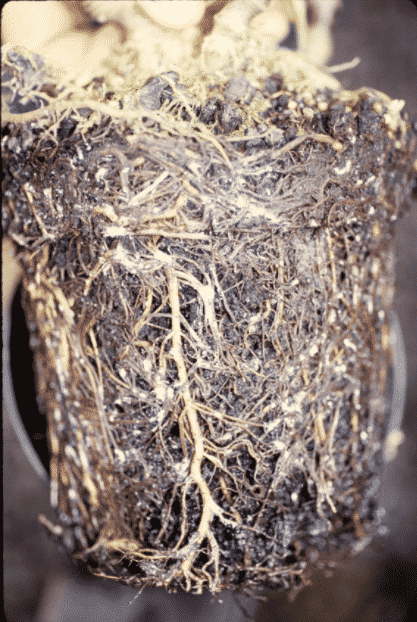 Root mealybugs resemble specks of white cotton or a white fungus. Look closer (you may have to get a magnifying glass) & you’ll see them moving slowly or if not, legs will be evident.

If the plant is going in the garden, you’ll notice them right away when you take it out of the pot. Return it to the nursery as soon as you can. They, as well as houseplants, can carry root mealybugs in from the grower or garden center.

Symptoms damage has been done:

Root mealybugs suck the sap out of a plant so you’ll notice stunted growth, less vigor, leaves turning yellow or brown. You know – all the typical stuff that’s common to a lot of other plant problems!

How to prevent root mealybugs:

Inspect your plants right away when you get them home by taking them out of the grow pots. 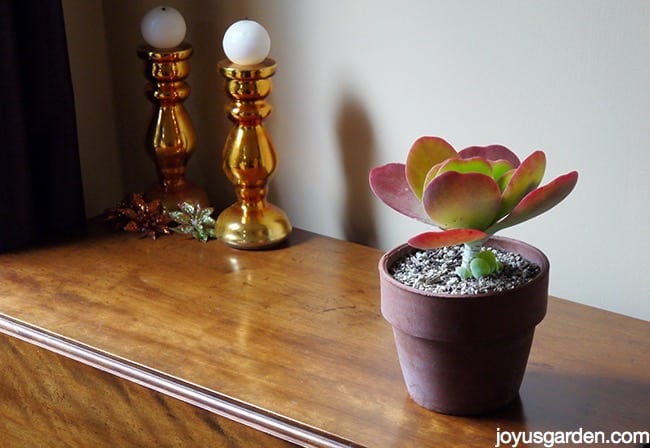 The only experience I have with root mealybugs was in our greenhouse in Connecticut when I was growing up. We had a lot of plants as well as seedlings but the scented geraniums, zonal geraniums, pelargoniums, and streptocarpus all got it at 1 time or another. I’ve heard that succulents and african violets are prone to them too.

Here’s what my dad would do:

Knock off as much of the soil as possible.

Place it in a bag & put in the garbage. Don’t put it in the garden or compost.

Soak the roots, covering the top of them, in a pail or tub of hot water.

My dad always said, “not warm but not scalding”.  I researched this a bit to see if anyone else had done this so I could get more exacting temps. You want the water to be in between 110 – 120 degrees F. Basically you want it hot enough to kill the critters and their eggs but not so hot that it harms the roots.

Leave the plant in the water for ten minutes.

The root mealybugs get killed almost instantly but you want to leave it in for good measure.

Repot the plant in fresh potting soil with a sprinkling of diatomaceous earth mixed in.

In case there’s any of them or their eggs left on, this will get it.

If you’re putting the plant back in the same pot, make sure to soak the pot in boiling hot water to get any root mealybugs off which might be hanging out on the sides or the bottom. Give the pot a good scouring too. 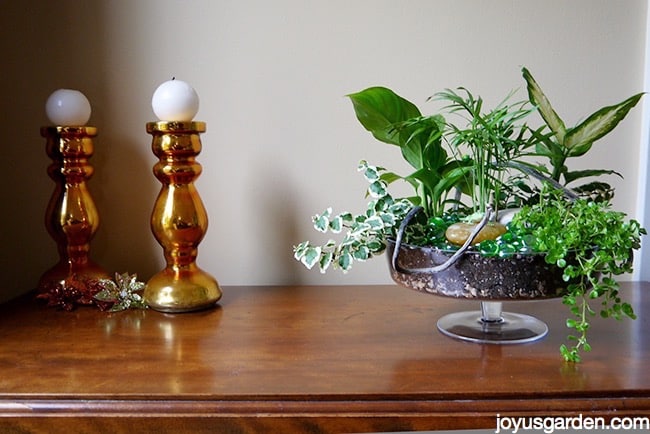 Other things I’ve heard off to be effective:

There are pesticides drenches out there but I don’t know much about them. You want to be careful not to use anything too strong because you don’t want to harm the roots.

Root mealybugs are treated differently than the mealybugs which hang out on the plant so don’t even bother trying horticultural oil, insecticidal soap, neem oil, etc.

Dealing with pests is no fun but it’s part of having plants.

Keep your plants as healthy as possible and they’ll be better able to survive any infestations. Do you have anything different that you’ve found to be effective for fungus gnats or root mealybugs? Please share!

Happy (pest free) gardening & thanks for stopping by,

Cleaning Houseplants: How & Why I Do It

A Guide To Watering Indoor Plants