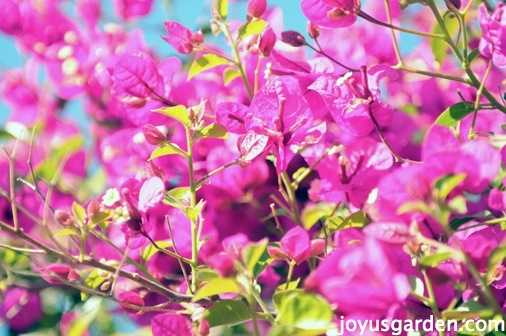 Bougainvillea is one of those plants that’s either loved or scorned upon.  Here in Santa Barbara it is seen all over town and there’s no denying that it provides an impressive explosion of color.  It is one of our “weeds” – right up there in quantity of sightings with Foxtail Agave, Torch Aloe and Bird of Paradise.  Bougainvillea is a very vigorous grower and is most commonly thought of as a large scale vine but there are other forms it is grown in and sold as.

I’ll start by showing my 2 bougainvilleas which more than satisfy my need for creative pruning.  This is Bougainvillea glabra which runs up my garage and across to the shed.  My driveway is long and it provides interest as I walk to my office, aka the shed or Joy Us garden world headquarters.   I’ll give it a heavy pruning in a week or 2 so that it does not overtake all around it.  Subsequently, it will get a light pruning every 6-7 weeks.

Next up is Bougainvillea “Barbara Karst” which I’ve done my best Edward Scissorhands on and think of it as an umbrella reaching out over my bromeliad garden.  This side of the house gets morning sun so I open it up to let light in below and let entry into the side door.  After a couple of seasons of disciplining, it is now 1 single trunk and a few main arching branches.  I prune it every 8 weeks or so and it stays well behaved.

Other than pruning (which I liken to a round in the lion cage due to their sharp spines), bougainvilleas require very little care.  I do not water them during the dry season, which goes for 9 months by the way, because I want a lot of flowers and less excessive foliage growth.  As for fertilizing, I simply top dress with a couple of inches of worm compost in spring.  This video, The Joy Us Bougainvilleas Creatively Pruned In Late May,  shows them to you in all their glory.

As I said, bougainvillea is found in the landscape  in various forms.  Here are some of the ways I’ve seen it.

As a Little Accent of Color on a Wall

Tumbling Over a Wall

As a Shrub “Blob”

The many colors of bougainvillea – here are a few that I’ve seen around town.

A lovely pale pink blush – I’m not sure what this one is (Coconut Ice? Ada’s Joy?)

Here are a few more things I’ve learned about bougainvillea.

For a floral fiesta, you can’t beat bougainvillea.  New varieties are coming on the market every year but I think I’ll pass.  Two bougainvilleas on one property are enough for me!