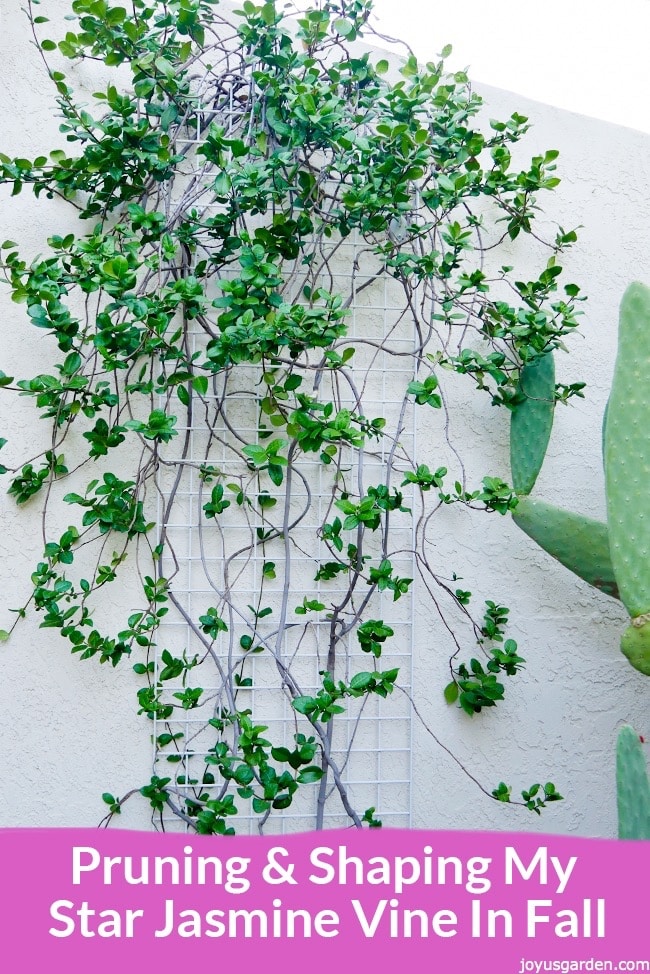 The best time to prune Star Jasmine, or Tracelospermum jasminoides, is soon after it flowers. It has a twining, wandering growth habit and wants to grab onto anything it can. Sometimes you need to prune it once or twice more during the growing season just to keep it from going too crazy.  Today I’m talking about pruning and shaping Star Jasmine Vine in the fall; October 19th to be exact.

I moved into my house in Tucson a year and a half ago and pruned this vine for the 1st time in May. It doesn’t have the best form and gets way too much sun in summer but is a nice hit of dark, glossy green against the white wall in the back corner of my garden. I decided to not take it out and see what I could do with it. I actually like its wild child look and the abundance of sweetly scented flowers it yields in March through April.

I escaped to San Diego for 3 weeks in June to beat the heat just a month after pruning this plant. June of 2017 was the hottest on record here in the Southwest. Lucky for me I as gone but many plants got a bad case of sunburn. Star Jasmine, along with others like photinia, nandina, boxwood, are marginal here in the desert with the intense summer sun and heat. Simply put, my Star Jasmine fried.

I’ve never had anything like this happen to a plant before but I had faith it would come back. I gave it a few deep waterings (it’s on drip but I just wanted to give it a little boost after the frying) over a few week span and applied another couple of inches of compost. Don’t give up on a plant too early just because the foliage is burned or hit by cold. The roots may be just fine which means it’ll eventually recover.

Mine did just that and come mid-fall, was in need of a light pruning. I think of this as a fall trim rather than a full blown spring hair cut. The temperature is cooling a bit to the high-80’s/low 90’s and the intense is off this Star Jasmine for most of the day now. Time to spring into action with the Felcos! 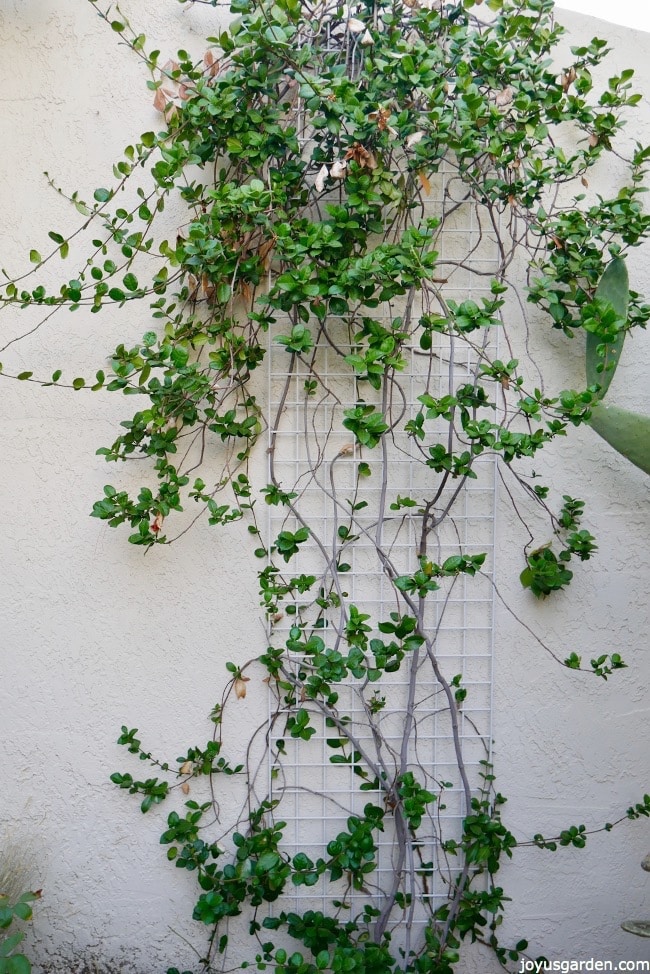 Here’s how it looked before the pruning.

My goals for this pruning were to remove the dead, keep the meandering tendrils in check, bring it below the roof level and shape it how I found pleasing. I didn’t want it to turn into a dense blob resembling a chimney. The thing about Star Jasmine; it’s pretty forgiving when it comes to pruning. It can grow as a hedge, against a fence or wall, over an arbor, being used as a border plant or a ground cover.

Tip: Don’t prune Star Jasmine too heavily and/or to late into the fall season because it’ll mess with the flowering for next spring or summer. And we all want a profusion of those sweetly scented, starry flowers!

How I pruned it: 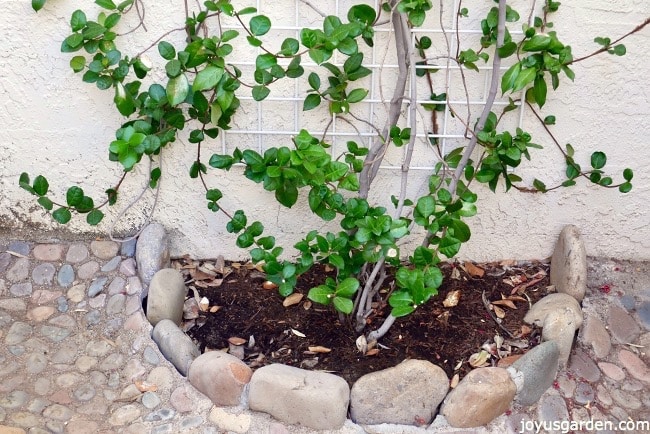 I started at the bottom trimmed those longer, twining stems back by 6 – 18″. 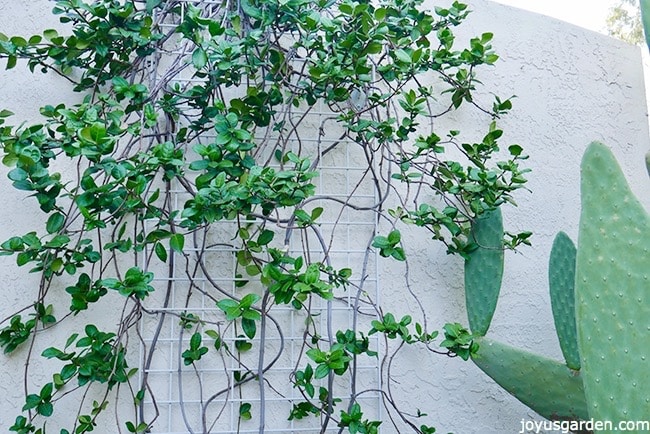 Here’s the middle portion after the pruning. I removed dead, cut back the twining stems & tip-pruned the shorter stems. I also got rid of long, rangy stems with only a few inches of foliage at ends. 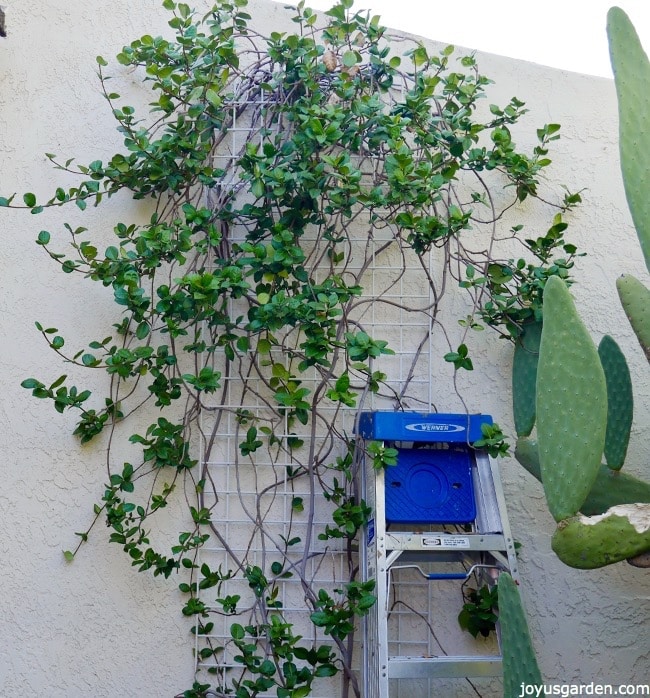 I did exactly the same with the top. There was more dead up here & I did a bit more thinning out. I trained a couple of those longer stems through the trellis to grow downwards to hopefully start filling in the middle.  It’s a hard space to work in with the slope of the little stone gully & the huge Cow’s Tongue Cactus beside it. Not an easy spot to prune in! 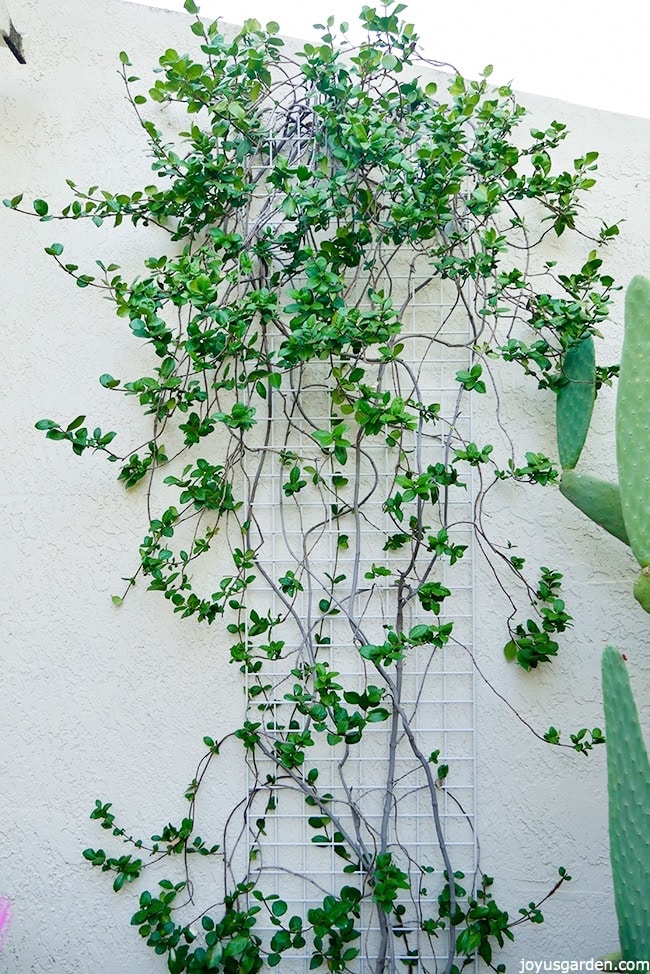 My Star Jasmine vine after its fall pruning. It still has a free form shape but is a little more “tamed”. It looks like the plant is growing over the roof from this angle but actually trimmed just below it. 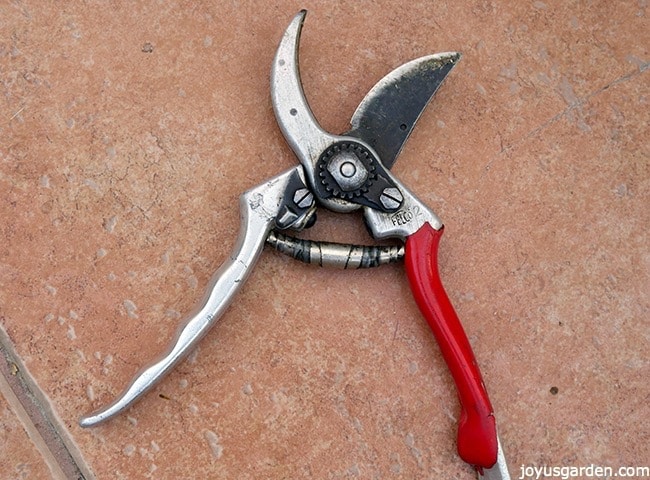 Tip: Clean your pruners after pruning Star Jasmine.  The stems emit a white, milky sap . It doesn’t bleed & drip like some of the Euphorbias do & it’s not as sticky. I’ve never had a bad reaction to it but just be careful if you’re sensitive to that type of thing. Some sites list Star Jasmine as non-toxic & others say it’s toxic. Never get the sap on your face.

I’ll leave this Star Jasmine be until spring. It shouldn’t get too out of control by then because the weather will be cooling. After it flowers I’ll give it another pruning and will probably do so again next fall. There’s 1 thing that’s oh so true: when you have a vine growing, there’s pruning to do!

Succulent Plants Growing Long Stems: Why It Happens And What To Do

How I Prune, Propagate, And Train My Stunning Hoya

Previous Post: « Decorating a Yellow Pumpkin with Purple Statice and Air Plants
Next Post: Protecting Your Garden From Curious Pets and Other Critters »

Join over 7,000 other subscribers that receive Garden Gazette twice per month! We’ll send you plenty of tips and tricks on caring for houseplants, succulents, and more.