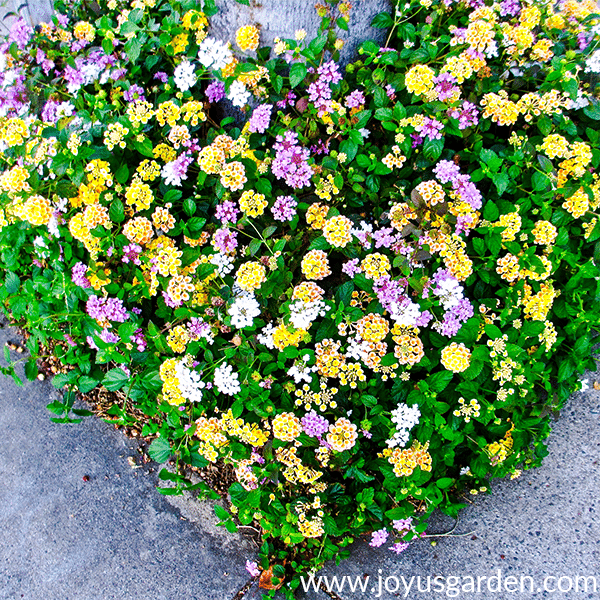 Here, you’ll learn all about pruning Lantana, how to do it and what you need to know, in late winter/early spring.

Lantana is a very popular landscape and is used in many different ways. It’s classified as a flowering perennial and comes in shrub form as well as ground cover/trailing. It flowers from Spring through Fall (who doesn’t love that?!) and is available in a wide range of colors and combos.

I’ll be showing you how I prune my Lantana “Dallas Red” which grows to around 4’x 5′ and my Lantana “New Gold” which is a ground cover at 1-1/2′ x 4′. Both are prolific bloomers that attract a multitude of hummingbirds and butterflies.

Lantana is hardy in USDA zones 8-11. It grows very fast once the weather warms up and can handle the summer heat here in Tucson just fine. Although it’s a perennial in many areas, you can most likely find it sold as an annual in winter cold climates.

I was visiting my friend in Connecticut one summer and she had it growing as an annual in a pot on her back deck. The hummingbirds were very happy!

Here’s that fresh new growth that you want to encourage – it means lots of flowers.

Why should you prune lantana?

Lantana grows very fast & blooms non-stop for 8 months or so. It needs to be cut back on the regular to keep it from getting too leggy & ratty &. It also appreciates a rest after that long period of blooming & before the new growth appears.

Lantana blooms on that new growth so you want to encourage as much of it as you can.

When should you prune Lantana?

I’ve always pruned lantana in late winter or early spring. When I lived in Santa Barbara on the coast of California, it was in February. Tucson has colder winters so I do it in early to mid-March. You want to wait until the danger of frost has passed & the evening temps are consistently above 38-40F.

Some people prune lantana hard (back to 6-12″) in November. That’s how the landscapers in my community do it. I much prefer to give mine a light shaping in November & do the biggest prune in March.

Related: Pruning 3 Types Of Salvias in Spring or Fall

013 Here’s how some commercial gardeners prune lantana – straight across & back to around 6″. Way to “sticky” & misshapen for my taste.

How to Prune Lantanas

Start by making sure your Pruners Are Clean & Sharp. If you’re like me, you have a lot of Spring pruning to do!

I start by taking out whole branches.

Remove branches which are touching the ground. They eventually get smothered out by all that new growth.

Take out branches which are crossing over, weak or awkward, along with ones which are dead. This thins the plant out so you can get an idea of how it’s going to look.

With my “Dallas Red”, I cut out a few branches which had been hit by the cold.

Prune the remaining branches back by 1/2. I always take out a few more branches towards the end as my eye sees pleasing.

Be sure to step back a couple of times during the process & see how the plant is looking.

In a few weeks I’ll take another snip or 2 if need be.

Time it took me to prune my trailing lantana & my shrub lantana: 15 minutes each.

The heaviest pruning is done in the late Winter/early Spring. I’ll do 1 or 2 much lighter ones to shape during the summer. Sometime in early November I prune lightly just to shape it going into the cooler months.

Lantana has a somewhat pungent foliage.

Some find the smell offensive but I don’t. Let’s just say it doesn’t bother me but I wouldn’t want a perfume made out of it! The odor releases only when the leaves are handled so you don’t have worry about a stinky plant in your garden.

The leaves have a light sandpaper feel to them.

To some people, they’re a skin irritant. They cause a minor dermatitis reaction, not a severe rash like poison oak or poison ivy. It has never aggravated me but I usually wear gloves when pruning any outdoor plants.

Despite the fact they’re attractive, don’t eat them. Warning: the berries are very toxic. Some say when ripe, some when unripe & some say both. I just leave them be.

Despite the fact that the berries are toxic, you see them planted all over in public areas. There are a few hedges of them near the Santa Barbara train station, along the beach sidewalks & up State Street. The same is true in Southern California. I’ve never heard of anyone dying of lantana poisoning so don’t let it stop you from planting it.

My “Dallas Red” (shrub form) before.

After its March 14th pruning. Much more opened up with plenty of room for that beautiful new growth to branch out.

Lantana blooms on new growth so you want to cut away a good portion of the previous season’s growth to make way for the new.

How much you take off is up to you. I stick within the range of taking it back by 1/3 to 1/2. The scalping method isn’t for me.

Lantana is semi or fully deciduous where the winters are cooler, like here in Tucson. Don’t be alarmed if your plant loses its leaves. The new growth will be abundant & much prettier.

Speaking of the previous season’s growth, some will fall off by Spring & some will still be on the plant. It’ll eventually fall off as the new growth emerges.

If you choose to take off the old foliage, be careful not to rip off the new growth in the process.

This isn’t artistic, precise pruning. If you’re Pruning it for the 1st time, don’t be afraid you’ll wreck it. Lantana is forgiving & grows back fast once the weather warms & the days get longer.

You really want to thin this plant out because the new growth comes on vigorously.

After its pruning. As you can see, the stems on this one are thinner & there are more of them

To give you an idea, this is how much I took off of “New Gold”.

Lantana is very forgiving when it comes to pruning which is a testament to how tough and resilient it really is. If you like non-stop blooming for months, give this plant a go. The hummingbirds and butterflies will be most grateful!

Previous Post: « Repotting A Euphorbia Trigona: The Mix To Use & a Good Trick To Know
Next Post: 12 Ways to Celebrate Spring »