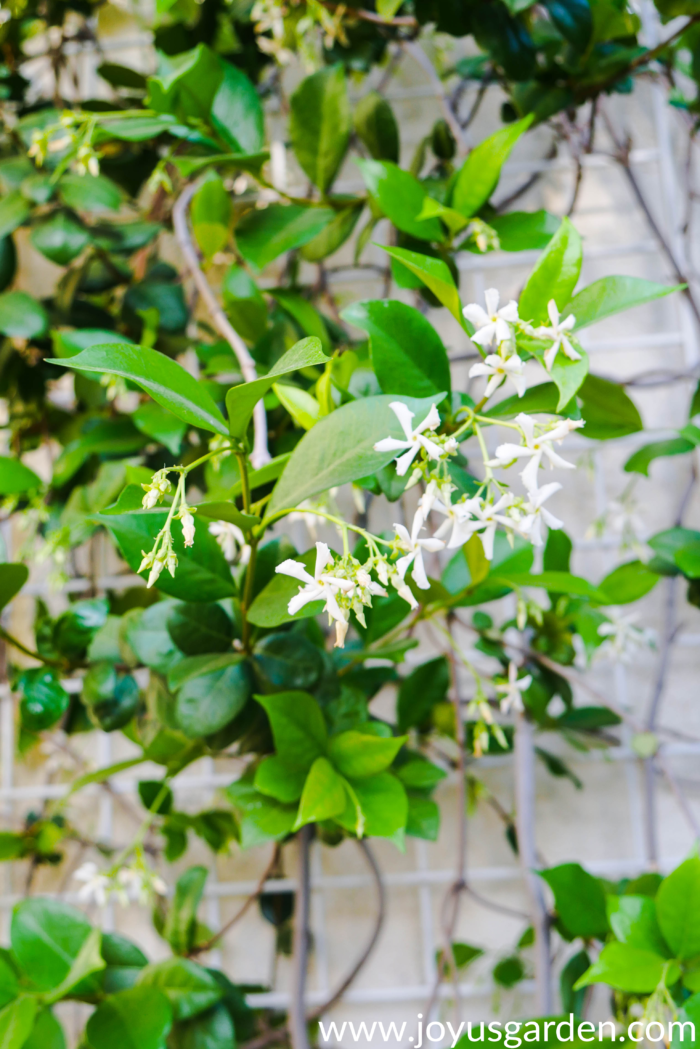 Can a plant recover from sunburn and heat stress?  If it’s not too severe, yes. I live in Tucson, Arizona where the sun is strong and the summer heat can be relentless. My Star Jasmine Vine burned last summer and again this summer. Here’s what I do with my sunburned and heat stressed Star Jasmine.

I didn’t plant the Star Jasmine (Confederate Jasmine, Trachelospermum jasminoides) in this location. One of the previous owners did. It grows against an east wall in the very back corner of my garden in an area not seen unless on the side patio. It looks good for 7-8 months out of the year but never as good as the many Star Jasmines I maintained in my professional gardening days in the San Francisco Bay Area. It’s a much more suitable climate for them.

The middle section of my Star Jasmine covered in dead leaves. Only a few had fallen off on their own but when I started the pruning, the deluge began.

I wouldn’t have planted a Star Jasmine in Tucson. It’s just to hot for it here (even in the shade) and I’d need to give it more water than I wanted to have it look decent. Even though it’s against an east wall our desert sun is very strong (shall we say brutal?!) and the top and middle of this plant burn. That’s why I grow my fleshy succulents in the shade; to avoid the sun burn.

Sometimes it’s hard to distinguish because the 2 often go hand in hand. Sun burn in plants, like in the case of my Star Jasmine, is a combo of too much sun & heat.  In my experience, sun burn shows up as whitish/silver patches in the middle or on the edges of the leaves.

With heat scorch the entire plant can wilt, leaves turn brown & then completely dry up. In both cases, the dead leaves can remain on the plant for a while & then eventually fall off.

Here you can see a few of those sunburned leaves in the foreground. They eventually turn brown/dried.

When can you prune a heat stressed Star Jasmine?

How to prune a heat stressed Star Jasmine:

This is specifically how I prune my Star Jasmine vine when it’s sun burned.  Some of this will apply to other plants too.

You can see me pruning this plant in the video below. I started in the middle because that’s where the majority of the burn was. I like to set the tone & figure out what’s going on by standing on the ground & not being perched on a ladder!

The errant growth on the sides was trimmed back just to give a little perspective. I like my star Jasmine to look “wildly tamed”, not the “pruned into a chimney” look.

Then the sunburned portions were pruned. I started by taking 4-6″ off the end each of each stem to figure out what was living & what dead. Turns out only the very ends of each (1-3″) were completely dried up.

I took out any awkward, dead or stems which crossed over as I went along.

The leafless stems were pruned in a staggered fashion so they didn’t grow back as a blob. I also tip-pruned most of the stems to keep them in check.

I did the same with the upper & lower portions of this plant.

Lastly – clean up the multitude of fallen leaves!

You want to do the heavier pruning in the spring after it’s bloomed. It’s fine to give it another prune in late summer/early fall but just don’t take it back to far. This messes with the blooming & that’s what we want. 2nd, Star Jasmine emits a sap when cut so be careful if you’re sensitive to that sort of thing. Don’t get it anywhere on your face.

Time it took:  1 hour over 2 days including clean up.

Done with the pruning.  It’s definitely not the prettiest prune job I’ve ever done but it looks better than with all those dead leaves on it!

These things are good to know regarding a heat stressed Star Jasmine.

These points apply to any sun/heat stressed plant.

The ideal would be to move the stressed plant out of the sun or protect it with something like an overhang or shade cloth.

I’ve found that heat stress shows up faster on a plant that does sunburn.

Stronger, better-adapted plants will recover at the end of the day. This is true of my lantana which wilts in the day & perks back up in the evening.

For the majority cases, sunburn is superficial & cosmetic only.

The plant recovers although it may happen again if you can’t move the plant or provide shade.

Sunburn is more likely to kill plant which is young or has soft stems & leaves. In the latter case, tomatoes are subject to sunburn.

You might have the urge to prune it right away but that can lead to more sunburn further in. I found that the dead leaves hanging on the outer stems can provide some shade for the inner stems.

Give your plant a little extra boost with compost. It also helps to hold the moisture in around the base of the plant.

Water deeply but not too often.

The plant is stressed; you don’t want to flood it every day.

You can water all you want but it won’t prevent the plant from sun burning or heat stressing. My Star Jasmine is on drip & I deep water it with the hose once a month in the warmer months. Doesn’t stop the burn & heat stress.

Start small; you can always go back & take out more. The stems of my Star Jasmine were dead only at the ends so I started light. I usually go back in a week or so & do a little tweaking if needed.

Here are those sweetly scented, star-shaped flowers starting to bloom late last winter. Will I keep it? My thoughts below!

Having said all of this, I believe in the right plants for the right environment. I don’t think Tucson will get any cooler or any wetter. Star Jasmine needs at least 1 pruning during the season which isn’t a bother for me at all. What I’m on the fence about is using water for a plant which isn’t optimum for this climate and has dead, somewhat peaked and limp leaves on it for 4 months out of the year.

The verdict isn’t quite out yet as to whether I’ll keep this plant out or not. I love the sweetly scented flowers in the late winter/spring but don’t know if it’s worth it. I could take the plant out, remove the trellis and let the wacky Cow’s Tongue Cactus growing to the right take over the wall a bit. Inquiring horticultural minds want to know – what do you think??

Previous Post: « Succulent Plants Growing Long Stems: Why it Happens and What to Do
Next Post: 24 Things To Know About Caring For & Growing Lucky Bamboo »