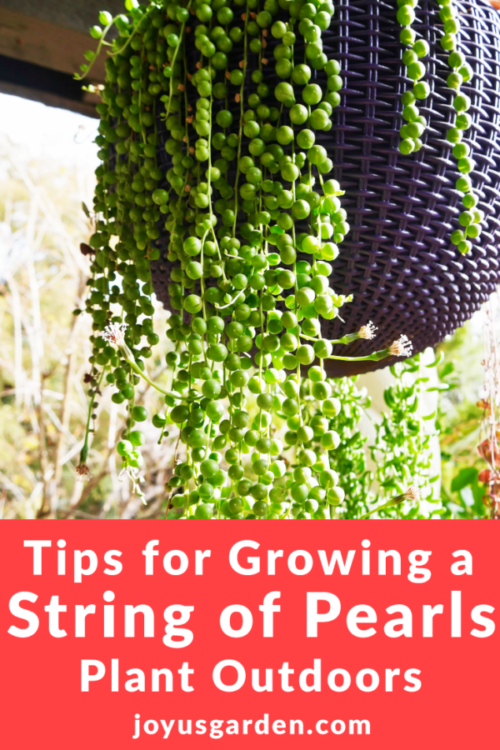 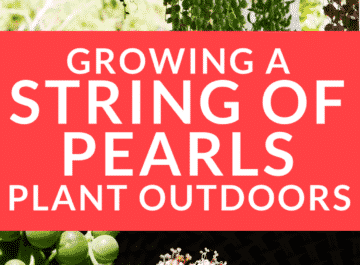 Here are my tips for growing a String Of Pearls plant outdoors.

The very 1st String Of Pearls post I did a few years back is the most popular on our site. I’ve grown String Of Pearls outdoors, as houseplants and even sold 1,000’s of cuttings when I lived in Santa Barbara. It’s high time for another post on this fabulous, intriguing hanging succulent, I say.

I’ve grown String Of Pearls outdoors (year round not just seasonally) for many years now in 2 very different climates – Santa Barbara, CA and Tucson, AZ.  The differences lay mainly in the light, watering and temperature which I’ll point out below. Growing it indoors is a bit tougher for me but regardless, String Of Pearls makes a fascinating houseplant if you have enough light.

Although in their native habitat they grow on the ground, for us, String Of Pearls is a hanging plant. Mine here in Tucson is now about 30″ long and still growing. I planted it in a large pot with a String Of Hearts plant and a few String Of Bananas cuttings about a year and 3 months ago.

You can see how much it’s grown! 1 of my String Of Pearls plants was over 4′ long in Santa Barbara. The other plants I routinely used for cuttings so they never got more than 2′ long.

I’ve found them to grow at a slow to moderate rate. My Fishhooks Senecio,  String Of Hearts  & String Of Bananas grow much faster.

A String Of Pearls plant growing outdoors likes bright light but to be protected from direct, hot sun. In Santa Barbara mine grew in morning sun which was sometimes shrouded by the fog. Here in the desert, any direct sun is a no go. Mine grows on my covered patio in a spot where the light is nice & bright but the plant is protected.

In Tucson, I water my String Of Pearls plant every 7-10 days when it’s cooler & twice a week in the hot summer months. As I said, the patio is covered so it doesn’t get rained on.  In my Santa Barbara garden, they got watered less. It’s hard to say how often you need to water yours because I don’t know your growing conditions.

I find String Of Pearls plants need watering a bit more often than most succulents because their stems are so thin. They’re subject to root rot so don’t get overzealous with the watering but on the other hand, don’t let them go bone dry for days.

I’ve heard that they can take temps as low as 30F. I never covered mine in Santa Barbara. This winter, we had 1-night dip to 28 & a few others hovered right at or slightly below freezing. I covered my String Of Pearls plant along with the other “fleshies.”  As I said in the video, the pearls look plumper & happier now (it’s late winter) than in late June when the temps are well over 100F.  Can you blame them?!

The pearls are nice & plump at this time of year. The intense summer heat here in the Sonoran Desert knocks a little life out of them.

Worm compost is my favorite amendment, which I use sparingly because it’s rich.  I’m currently using Worm Gold Plus. I use Tank’s local compost. Give Dr. Earth’s a try if you can’t find anywhere you live. Both enrich the soil naturally & slowly so the roots are healthy & the plants grow stronger.

If you have any liquid kelp or fish emulsion, those work fine too. Easy does it on any fertilizer as succulents don’t need much.

If you’re using a store-bought succulent & cactus mix like this one, you might consider adding some pumice or perlite to further up the ante on the aeration & lightness factor.

I also mix in a handful or so of organic compost & sprinkle the top with a layer of worm compost when I plant.

You have to be careful when repotting because those pearls fall off easily. I’ve done a post & video for you to make it easier.

I always make sure the crown of the plant & root ball is no more than 1″ below the top of the pot. I’ve found that if it sinks in too low, the chance for rot is greater.

Spring & summer are the best times to repot & transplant succulents.

My String Of Pearls has really grown a lot since planting it in with the String Of Bananas & String Of Hearts. I’ve given quite a few cuttings away.

I’ve had the best success propagating String of Pearls by stem cuttings in succulent & cactus mix. Here’s one video showing you how I do it along with another one which was filmed in my early days of Youtube (don’t judge!).

I’ve planted cuttings which are 6″ long & ones that are over 1′ long. Both  worked. You can also propagate the individual pearls pointing the stem ends into the mix but I’m too impatient for that method.

There are a few reasons I’ve pruned a String Of Pearls: to take cuttings, to control the length, & to take off any dead stems. I did the pruning year round in Santa Barbara but avoid doing any in the 2 coldest months here in Tucson.

Mine have never gotten any but they’re susceptible to aphids & mealybugs. Be sure to click on the link to see how to control them. Has your String Of Pearls gotten infested by any pests? Please let us know.

From what I have researched, String Of Pearls is toxic to pets.  Because these are hanging plants, you can place them where your kitties & pups can’t get at them.  My kitties don’t mess with my plants so it’s not a concern for me.

Here are those sweet little flowers. To me, they smell like a combo of carnations & cloves.

Oh yes, they do!  The sweet/spicy-scented white flowers have always appeared in winter on my String Of Pearls. I’m doing a separate post & video on this soon so I drop the link in here when it’s done.

Growing a String Of Pearls Outdoors for the Summer

If you live in a cold climate, your String Of Pearls would greatly appreciate a summer vacation in the great outdoors. Make sure it doesn’t get any strong, direct sun or it’ll burn in a heartbeat.  Everything I’ve written above applies except for  2 things I want to point out.

If you get a lot of rain over the summer months, you might consider placing yours under protection. If a String Of Pearls gets too wet & doesn’t dry out, it could rot & the stems & pearls will turn to mush. And, when you bring it back into your home for the cold months, be sure to give it a good hosing down (gently – not like a firehose blast) to knock off any hitchhiking pests &/or their eggs.

The sweetly, spicy scented flowers of the String Of Pearls

Growing a String Of Pearls plant outdoors has been easy for me once I got the drill down. I hope you get 1 of these groovy succulents and give it a go!

« Lucky Bamboo and Spider Mites: How To Prevent This Common Plant Pest
10 Reasons Why You May Be Having Problems Growing a String of Pearls Plant Indoors »