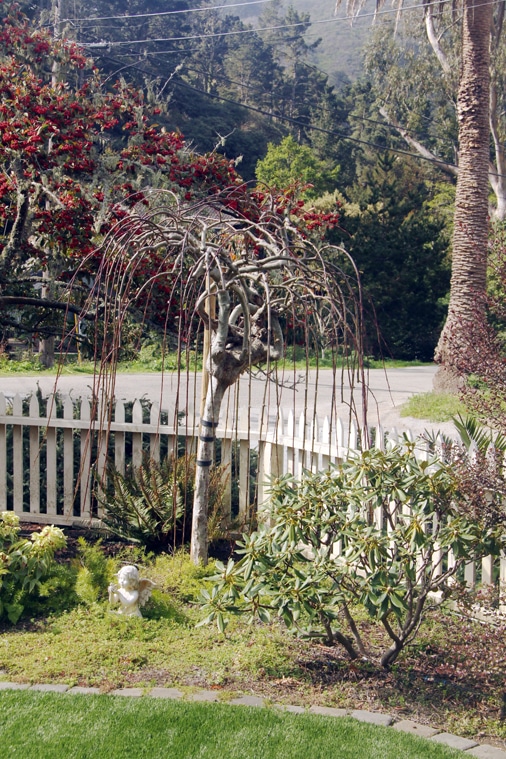 This is how the Weeping Pussy Willow looked at the end of March 2014. As you can see, it’s developed a beautiful structure.

Here’s the alternate title to this post: How To Make Good On A Bad Prune Job. This Weeping Pussy Willow tree, or Salix caprea “pendula”, has been growing in my client’s garden for about 11 years now. I’m no longer her full time gardener as I’ve since moved south to Santa Barbara.

Over the years I’d been artfully pruning and training it but at the end of 2011 it got hacked by the new gardener (what?!).  On five of my subsequent visits to this garden I’ve done restorative and cosmetic pruning. Much to my surprise it’s come back to its glorious self much faster than I thought.

A Weeping Pussy Willow tree is a plant not often seen in gardens here in California.  My client, who lives just south of San Francisco, had been her eye on the one in the Wayside Gardens catalogue and finally ordered her coveted specimen.  It arrived in a 2 gallon grow pot wrapped in paper and stood about 4′ tall.

We planted it with lots of compost in the moistest part of the garden where the all the water naturally drains off the hill.  It had been growing slowly, and with 3 careful prune jobs a year, had developed a beautiful trunk form with a nice shape.  So it was much to my surprise when I paid a visit in November of 2011 to discover that it had been “pruned” into what you see below. Action was required! 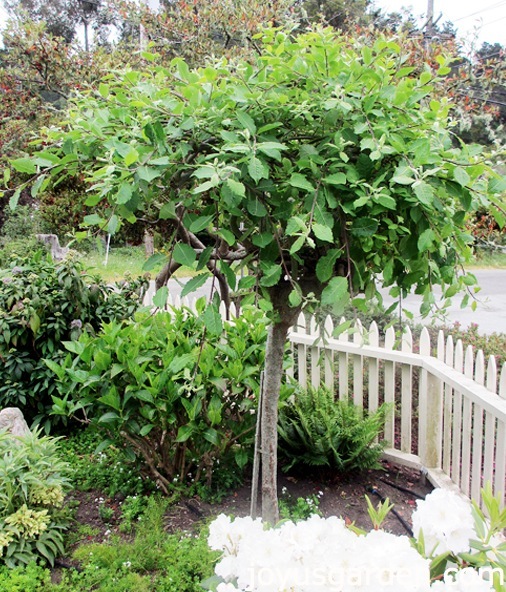 This is the Pussy Willow “blob” in November 2011. Hey, where’s the weeping?

We had affectionately call this plant “Cousin Itt”, but after a bad haircut, Itt had turned into Bozo The Clown!  A weeping tree or shrub like this should be thinned out or just taken off the ground a bit – not all the way back to the trunk.  The very same applies to a climbing roses as it takes them a good amount of time to climb and that’s what you want.

The picture above was taken in November of 2011 and fortunately some of the new branches had already started to weep by Spring.  In May of 2012 I whipped out my Felcos and pruning saw. I’ll take you on a step by step on how I got this Weeping Pussy Willow back to its glory days. 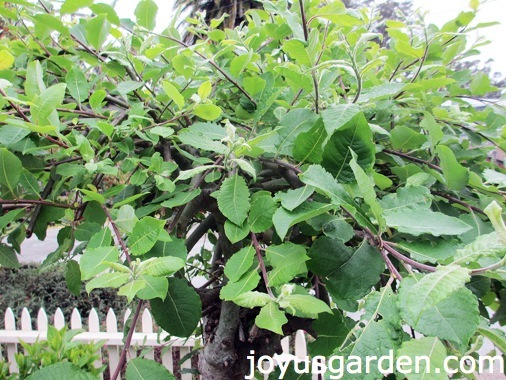 A close-up showing how thick that new growth was.

I went in and took out a lot of that new growth.  You must take it all the way back to a main branch or the trunk otherwise all those shoots will appear again.  I also removed some of the older main branches to open it up and bring it back to an interesting form.

In the meantime, Cousin Itt had really started to lean because of the strong winds in this area so a lodge pole stake was pounded in to straighten him back up. 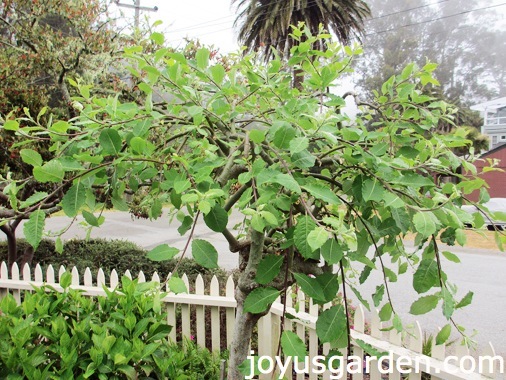 Here’s how looked after I was done. I left just a bit of the new growth shooting upward because we do want it to grow taller. 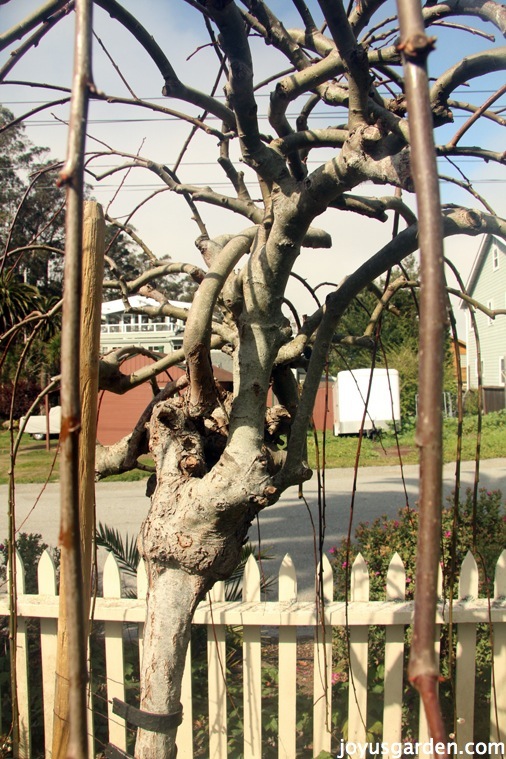 A close up of the inner structure after I pruned it this past Spring. As you can see, I’ve taken a lot out.

Lots of new shoots always appear on the trunk. Those shoots, the smaller ones coming off the main weeping branches and a portion of the ones heading upward need to be removed too.  They’ll spoil the beautiful weeping form (and isn’t that the reason why you buy a plant like this?) as it’ll looks better when it’s thinned out a bit.

These standard plants are sold grafted and will never get significantly taller than the height you bought it at. And this is exactly why the Weeping Pussy Willow will never get as tall as the upright Pussy willow.

I’ve since done a post and video about how I care for a Weeping Pussy Willow tree which you might find helpful.  I share all I know about it and outline the care tips.

I did a couple of rounds of restorative pruning letting it grow between each one.  Then I started in on the cosmetic pruning and this Weeping Pussy Willow looks dandy as can be. Make sure you know how a plant grows and how long it takes to recover before you have at it with the pruners!

A Link To Help You Out:

Before you tackle a job like this make sure your pruners are clean & sharp.

Join over 7,000 other subscribers that receive Garden Gazette twice per month! We’ll send you plenty of tips and tricks on caring for houseplants, succulents, and more.