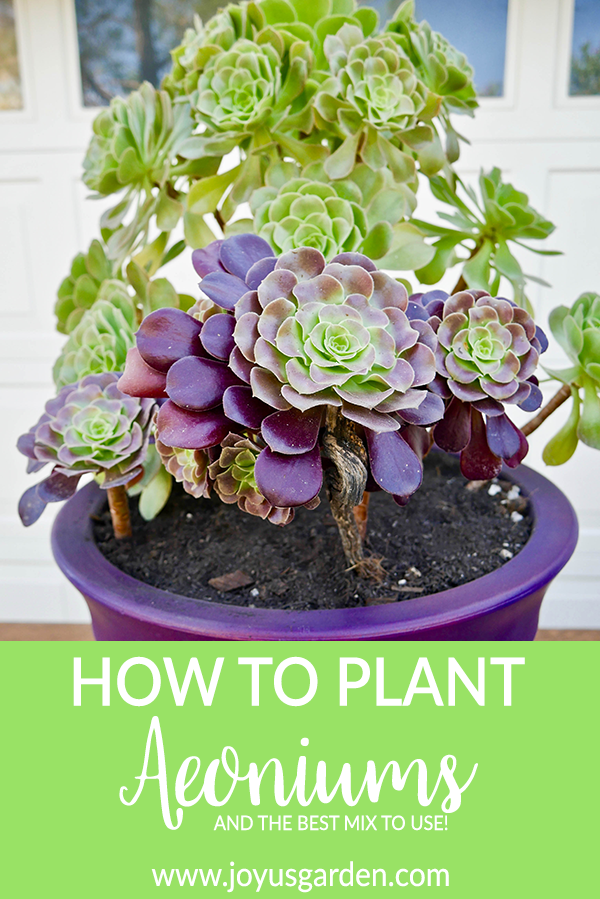 Aeoniums are those wonderful succulents which grow in a variety of colors and sizes but all are rosette-shaped. I love them! If you look into the head of an aeonium, it’s almost mesmerizing. Planting aeoniums in containers is similar to planting other succulents but it’s best to use a different soil mix.

Many of the aeoniums are native to the Canary Islands. I’ve visited 2 of them and they’re known as the islands of eternal spring. I grew a lot of them in my garden in Santa Barbara. The 2 climates are similar so they thrived. I had oodles of cuttings that I gave away and used them in all types of crafts and DIYs. I found that there were plenty of uses for aeoniums after planting many of them in my garden.

Planting Aeoniums & The Soil Mix To Use:

I moved from Santa Barbara, an idyllic haven for fleshy succulents, to the Arizona desert 2 years ago. Aeoniums are known to not do well here. The ones I have been doing good (not bad but not great either) and look better in the cooler months. I bought the ones you see here as cuttings and it’s a wonder they’re even alive. I’ve had them in the same shallow, rectangular planter that I planted them into soon after the move. The soil was down by half – shame on me!

Oh my goodness, this rectangular planter was so heavy! The aeoniums will be very happy to be in their new home.

1/2 part succulent & cactus mix. I use 1 which is produced locally which I love but this one is an option. Succulents need a loose mix so the water can thoroughly drain out & they don’t rot.

1/2 part potting soil.  Again I use a local potting soil but I also like Happy Frog because of its high-quality ingredients. It’s great for container planting, including houseplants.

A few handfuls of coco coir. (how many handfuls depends on how big your pot is). This environmentally friendly alternative to peat moss is pH neutral, increases nutrient holding capacity & improves aeration.

A few handfuls of compost. (ditto for the compost & orchid bark).  I use Tank’s local compost. Give Dr. Earth’s a try if you can’t find anywhere you live. Compost enriches the soil naturally so the roots are healthy & the plants grow stronger.

A few handfuls of orchid bark. This works for me but it’s not necessary. I had some on hand so I throw it in.

1/2″ topping of worm compost. This is my favorite amendment, which I use sparingly because it’s rich.  I’m currently using Worm Gold Plus. Here’s why I like it so much.

If you grow them as houseplants, a ratio of 1/3 potting soil to 2/3 succulent & cactus mix would be better.

Because aeoniums are native to subtropical areas, they like to be kept a bit moister than other succulents and that’s why this blend works. It makes sense because the Canary Islands are surrounded by water. Although those islands may not get an abundance of rain, there is some fog and the temps are mild but not hot. Aeoniums don’t do well in Tucson, according to articles I’ve read, but for whatever reason, my aeoniums are carrying on.

You want to plant your aeoniums in a richer medium than straight succulent and cactus mix but make sure it still drains well. I lived 8 blocks away from the beach in Santa Barbara so my aeoniums got a light misting from the maritime layer. Here’s how they looked a couple of years ago when I brought them to Tucson. My they’ve grown!

Here are the root balls. As you can see, they’re not too big.

I Plant Aeoniums The Same Way I Plant Other Succulents:

Fill the pot with as much of the above mix as needed. You’ll see this in the video.

Put the plants in the way you find pleasing & how you want them to grow in. I put the ones with the largest root balls in 1st.

Sprinkle in a few handfuls of compost.

Fill in with the mix & add in the plants with smaller root balls. You can keep filling in the mix until the root balls are covered.

Good To Know:  the taller aeoniums & ones with bigger heads get heavy. For this reason, I ended up staking them until the roots take hold are able to anchor them in.

Put in bright shade & let them settle in for up to 5 days & then water well. Because the temps are over 100F these days here in the Arizona desert, I watered them after 2 days.

All planted in & looking good with the 3 cuttings which broke off at the base.

The aeoniums which grow in a tree-like manner like the tallest one you see here have branches which tend to easily snap off; especially the lower ones. No worries, you can heal them over (form a scab so those fleshy stems don’t mush out when planted) for a couple of weeks. In Santa Barbara, I let aeonium cuttings heal over for as long as 7 months but here in Tucson planted them after 5 days.

Instead of giving them away, I decided to add the cuttings into the pot after 5 days.

I’ll top with a 1″ layer of compost after the plants settle in & the mix goes down a bit.

This is good to know about aeoniums:

Aeoniums lose lower leaves like crazy as they grow. I’ve found that this is especially true after you transplant them. I wait until they thoroughly dry out & pull them off.

Just because – I love their beautiful rosette shaped heads.

There are so many different types of aeoniums. I’d like them all, especially the Sunburst Aeonium, but the 2 varieties I have are pushing the limit here in the desert.

Aeoniums do great in containers and are a welcome addition to any garden. Use this special soil mix and yours will be happy and healthy as can be.