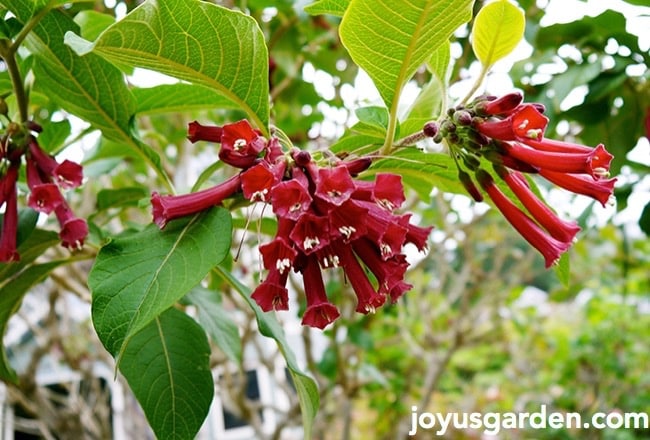 Oh my tubular floral goodness, Iochroma cynaea grows like a bean stalk and flowers like crazy. Because of its vigorous growth habit, this subtropical stunner needs a frequent cut back.  Not only does this tall shrub look much better with pruning but it also stimulates flowering as it blooms on new growth. This is all about the necessary pruning of Iochroma cyanea as well as how to care for it.

Yes indeed, this Iochroma cyanea “burgundy wine” reaches straight up skyward if not given a habitual haircut. It’s hard to believe this was planted out of a 4″ pot.  It grew to over 6′ in its 1st season!

As you can well imagine, the hummingbirds go absolutely crazy over these flowers and flock to it every morning and then again in the late afternoon. There is also a blue Iochroma in this garden so when the burgundy one is cut back, then they can buzz over to that 1.  I never cut them back at the same time otherwise there would have been a hummingbird coup and I would have been the unhappy victim.

How to Care for Iochroma cyanea

Plainly put, Iochromas grow very fast.  The ones that I’ve seen around Santa Barbara & in the San Francisco Bay Area all reached over 12′ tall.  They can get a spread of at least 7′. I like to keep them at about 8-9′ tall because they’re much more manageable.  Even though they’re classified as shrubs, all the ones I’ve seen have grown into small trees. And remember, it’s the frequent pruning that encourages all that wonderful flowering.

Along the coast, they can take full sun (which is considered to be “cool sun”). Be sure to protect them from full sun & reflected heat if yours are growing inland.   Indoors, you want to give them as much natural light as possible.

Iochromas like regular water.  The 1 that you see here is on drip but is not receiving as much water as it had in past years due to California’s drought.  The foliage looks a little paler & smaller than in its glory days but it flowers like the dickens none the less.  If yours is growing in a container, don’t let it dry out.

Here’s a purple/blue Iochromas – this 1 is a bit paler but some of the varieties are very intense in color.

They’re hardy to around 25 degrees F.  If hit with a 2 or 3 day period of frost, the foliage will drop but the plant will probably recover in spring. If your Iochroma is not too big, it can be brought indoors in the winter.

The Iochromas growing in this garden don’t get any fertilizer but they do get a generous dose of organic, local composting (a top layer of 2-3″) every year or 2 in the winter.  As a container plant, fertilizing is necessary & you want to use a balanced organic food like 10-10-10.  Oh, be careful not to use a fertilizer with too much nitrogen.

Yup, Iochromas certainly get them. The whitefly has been the common insect issue on the 2 in this garden but they have also gotten a few thrips too.  These plants grow along the coast just south of San Francisco where the temps are never too hot or too cold – ideal breeding conditions for various pests.  When I was the gardener here, I kept the plants thinned in the middle & used sticky traps for both the whitefly & thrips.  Keep your eye out for spider mites & aphids too.

Not a care tip but this is where Iochroma steals the show (that’s why it’s in capital letters!).  In warm climates, it flowers all year long. In the SF Bay Area, they flower spring, summer & fall. The totally tubular flowers reach 3″ long & form a dense ring around the branch. There can be 2 to 4 rings on each branch so when in full regalia, these tropical beauties put on quite the show.

I’ve seen them in blue, purple, burgundy, red, salmon & orange. Hummingbirds adore them & so do bees & butterflies. By the way, they’re related to another flowering machine that’s also in the Solanaceae family – the showy Brugmansias.

I always have to haul out the big girl pruners when pruning this baby!

How to Care for Iochroma Cyanea

I used to be the full-time gardener at this account & pruned the Iochromas 3 times a year for at least 15 years. The current gardener isn’t keeping up on the pruning so that’s why it got so tall & had to be so severely cut back.

I would give them their heaviest pruning sometime in October.  You don’t want to prune them too close to when the temps start to drop.

In spring, I would follow that up with a lighter pruning. In mid-summer, they would get a similar pruning.  By keeping up with it this way the Iochromas would look a lot better (that fast growth habit turns the plants lanky in no time) & abundantly flower.

You don’t need to be too fussy with the pruning technique. I would start by thinning out & taking down the outer branches.  I would prune my way around & inside the plant so that it’s brought down & opened up.  As I go, I remove any dead or crisscrossing branches.

By opening Iochromas up in this climate the air circulation is increased which in turn decreases the chance of an in insect infestation.  Most grow densely so it’s also good to let some light into the garden below – an added bonus.

There might be some shoots coming off of the base so be sure to remove them.

A bit bare but this Iochroma really needed a good pruning.  As you can see, the inner branches are a wee bit taller than the outer ones.  I was in this garden 9 months later & it had grown to over 12′ tall once again.  The gardener obviously isn’t keeping on top of the pruning!

The care is easy on these plants if you keep up with the pruning.  Iochromas bring new meaning to the term “flower power” and will keep all the hummers and butterflies who frequent your garden well-fed.  This dramatic beauty satisfies all!

Those taller branches that we pruned out were towering over me!