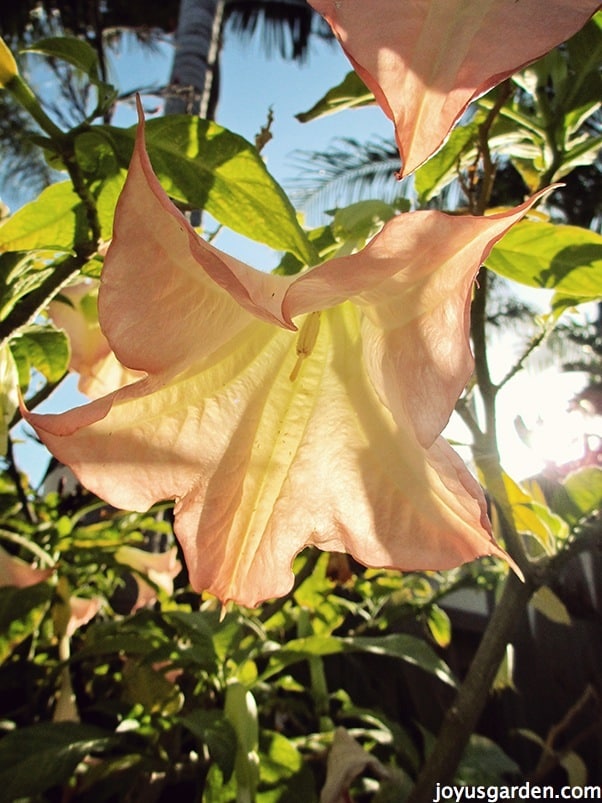 Angel’s Trumpets are impressive.  These large shrubs, which easily turn into small trees, stand head and shoulders above other plants in the garden.  Their height, breadth and masses of fragrant, trumpet shaped flowers never fail to impress – both the eyes and the nose. Here’s what I’ve learned from experience by maintaining Brugmansias along with care tips. 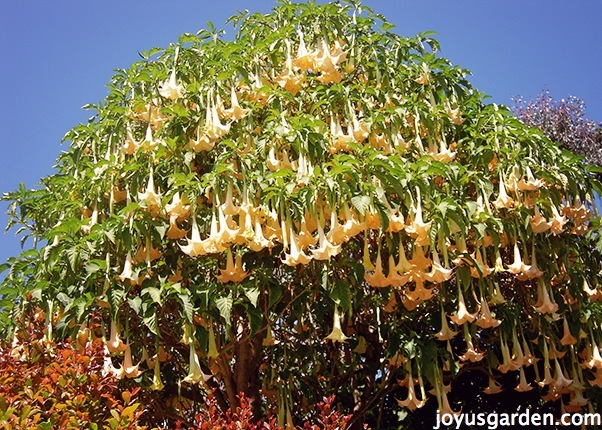 This pic is a bit bright but you can see what I mean about the masses of flowers & presence in the garden a Brugmansia has. This is “Charles Grimaldi” by the way.

They are quite the common landscape plant here in Santa Barbara.  There are four cultivars/varieties commonly seen here but Florida with its sub tropical/tropical climate has many beauties.  Plain and simple, they’re grown for their flowers.  Brugmansias have an unusual habit in that they only flower above where the stems fork which you’ll see in the picture below.  So, if you have a baby plant, don’t expect it to flower until you see that “Y”.  Be sure to remove all the leaves below that first fork because that will save your young plant some energy. 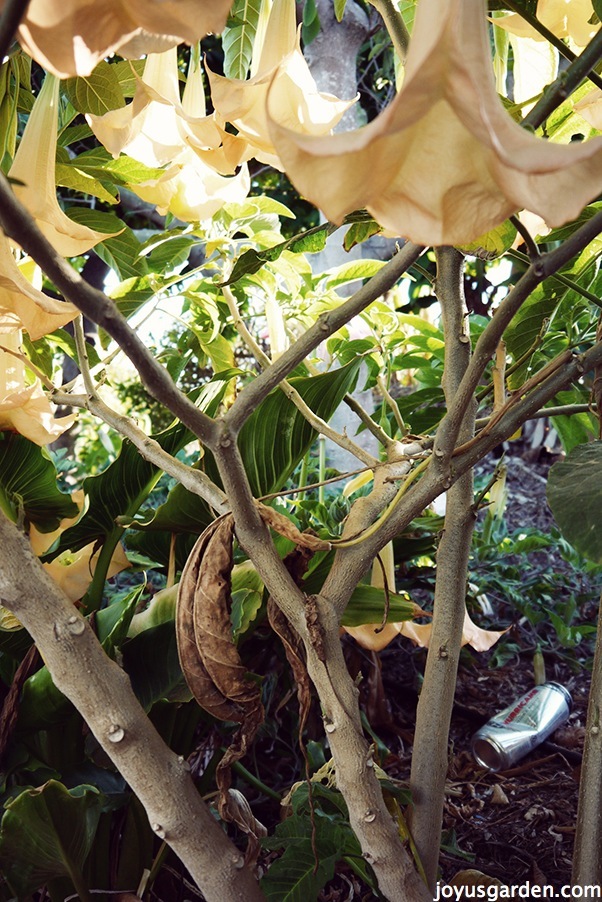 Here’s are a couple of close ups so you can see the “Y” or fork I’m talking about. 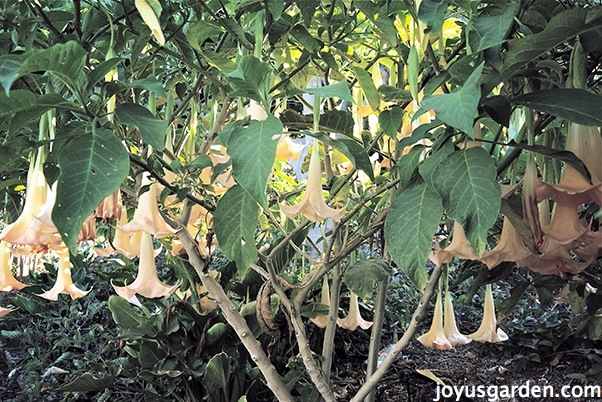 If you have a new plant don’t be too impatient, give it some time to bloom.  I planted a Brugmansia “Double White” in my client’s garden and the flower was single for the first year of its bloom.  It then turned double the following year. Here in Santa Barbara they have a long bloom time: late Winter through late Fall with the heaviest displays coming during the warmer months.  Definitely worth the mess these plants make! 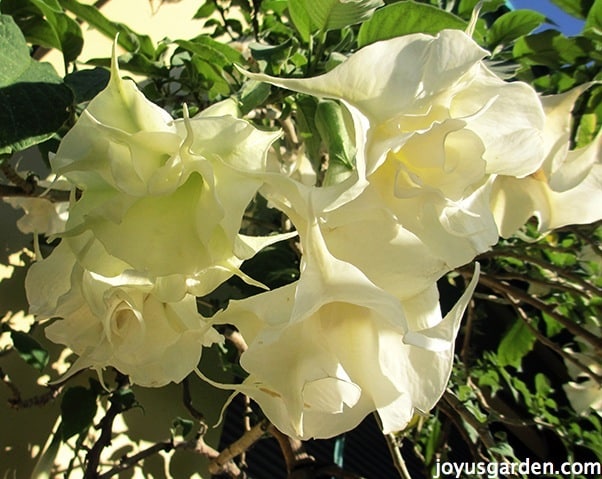 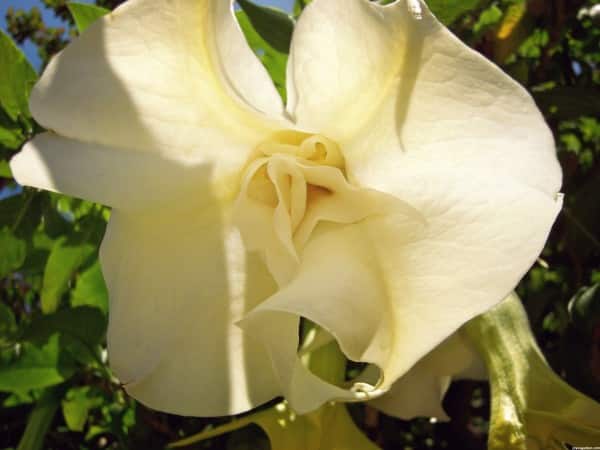 Here’s what you need to know if you want to grow Brugmansias in the garden:

Hardiness: Most grow in zones 8-10b but there are some varieties which are hardy in zones 7b-10b.   They are semi-evergreen the colder it gets so expect some leaf drop.  If you get a couple nights of frost, your Brugmansia should come back even if it goes down.

Light: Angel’s Trumpets prefer cooler sun or partial shade – this is why they love coastal Southern California (except for this year – they’re definitely not diggin’ our drought). They love it bright but need to be protected from hot afternoon sun with dappled shade. In their native environments, they grow beneath the understory of taller plants.

Water: Brugmansias like regular & deep watering to keep them looking there best.  They have a rangy growth habit & will get scraggly if kept too dry.  This is evidenced by the pictures I’ve saved for the end to show you how they look in a drought.  Spoiler: they’re not lovely, that’s why they’re at the end! 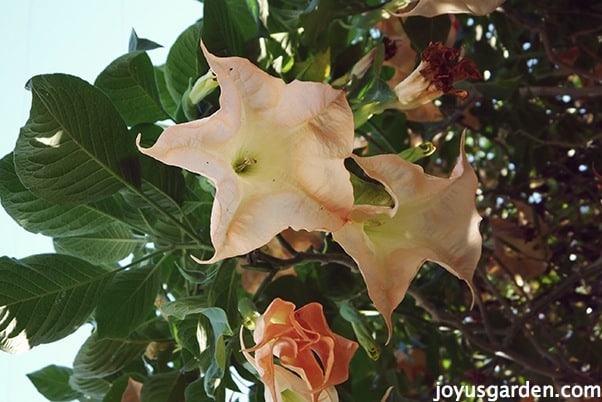 Soil: Nothing too particular, just regular garden soil with good drainage. Top dressing with a good amount of rich compost ( I use a local compost. Give Dr. Earth’s a try if you can’t find any where you live. Both enrich the soil naturally so the roots are healthy & the plants grow stronger) every Spring will make your Brugmansia very happy.

Fertilizer: I never applied any to Angel’s Trumpets when I was a professional gardener, just lots of compost.  I was reading something very interesting on a grower’s website that I wanted to share with you: they recommend feeding them with a fertilizer formulated for tomatoes which makes perfect sense.

Brugmansias are in the Solanacae family right alongside tomatoes.  They aren’t crazy about phosphorous (N-P-K on the box or bag with the middle letter being phosphorous) so another suitable fertilizer for them would have numbers like 30-10-20.  Fertilize in early Spring & then a couple of times during the growing season.

Pruning: Brugmansias are vigorous growers & will get rangy in no time.  They flower on new wood so pruning helps with that bloom that we want. I pruned so they’d look better in the garden & wouldn’t get too tall.  I pruned the established ones down about a foot or 2 in early Spring & then did a couple of lighter prunes throughout the season.  If you have one that’s really leggy then go ahead & give it a really good pruning but stay above the forks. 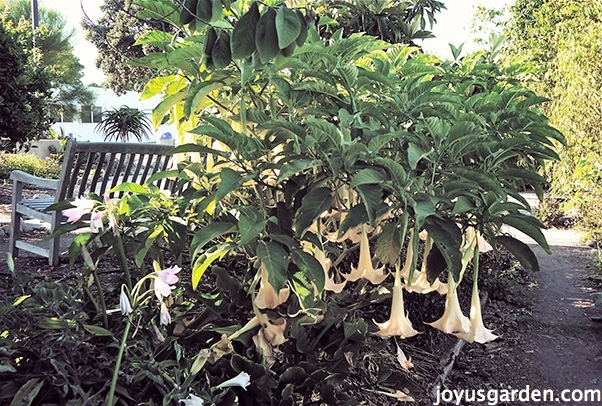 “Charles Grimaldi” grows to at least 12′ tall but here it’s kept under 6′ tall with regular pruning.

Flowers: Two words: Huge & fragrant!  Brugmansias flower abundantly if all their needs are met.  No, the fragrance is not there merely for the pleasure of we humans.  It’s particularly strong & heady at night to attract pollinators to the flowers.

Some varieties having larger flowers than others.  There are some with double & triple flowers – these are extra showy.  They can be white, yellow, coral, pink, orange & red. Florida growers offer many more varieties than we have here in California because their climate is much more suited to their likes.

As I mentioned, most of the flowers come on new wood.  A word of warning: they do drop a lot of flowers & leaves so if you’re a neat freak, this may not be the plant for you. 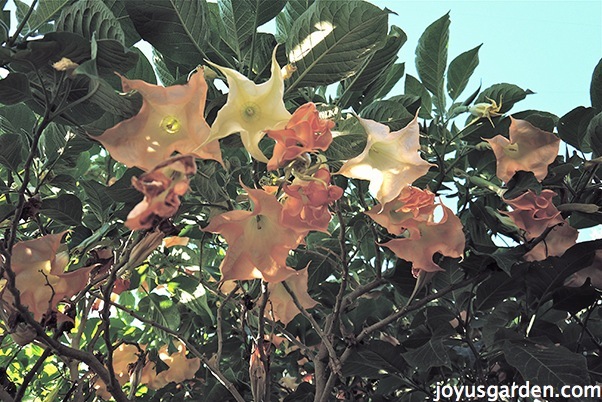 Brugmansias are especially beautiful to look up into.

Containers: The dwarf varieties are suitable for containers but just make sure they’re large enough.  You will need to water them more in pots especially the bigger they get.

As Houseplants: I’ve never tried growing one indoors because I think there are so many more plants which are better suited to our home environments.  However, you can bring it inside in the cold months just be sure give it as much light as possible.  Or, you can force it into dormancy & have it wake up when put back out into the great outdoors. 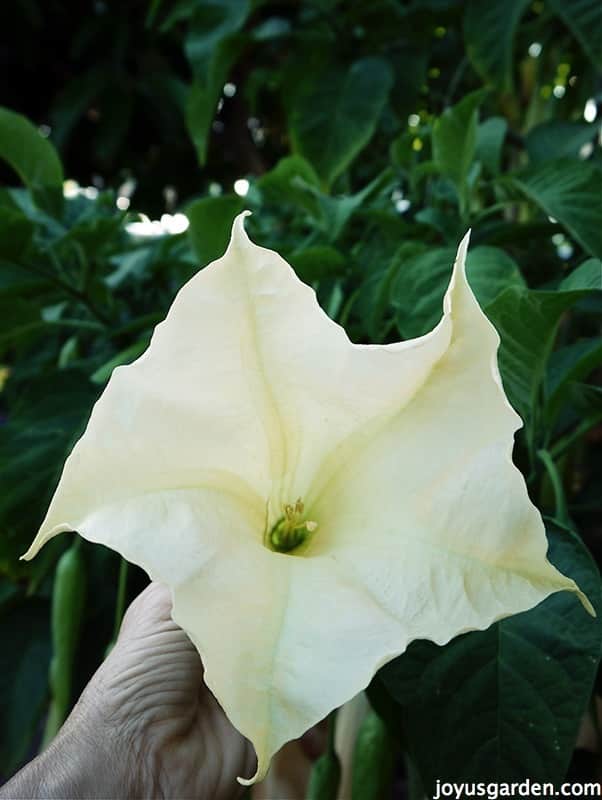 This is “Betty Marshall”, a single white variety.

Here’s the Red Flag: All parts of this plant are poisonous.  However, there are many of them growing in Santa Barbara and we’re all still alive.  Before you gasp, numerous plants are poisonous – poinsettias, mistletoe, oleanders, azaleas & rhododendrons just to name a few.  I’ve touched Brugmansias quite a few times over the years with no reaction whatsoever but you might be more sensitive.  Keep them out of your eyes and use common sense … don’t eat them.  If your pets like to munch on plants, then Brugmansias aren’t a good choice for you. 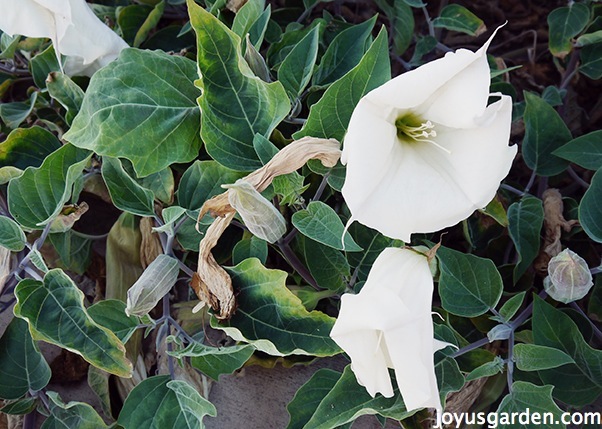 This is a Datura which grows as a ground cover. Notice the flowers are the same, just smaller and they grow upward. Brugmansias once had the genus Datura too.

There’s a video after these last oh so lovely pictures so be sure to check it out.  Our summer evenings are warm and I can always tell if there’s a Brugmansia nearby – their scent gives them away.  I love to hold those flowers to my nose and take a big inhale! 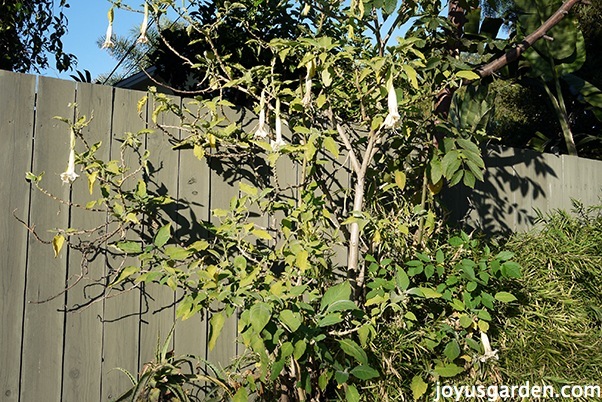 These photos won’t win any awards but you can see how Brugmansias look in a drought. 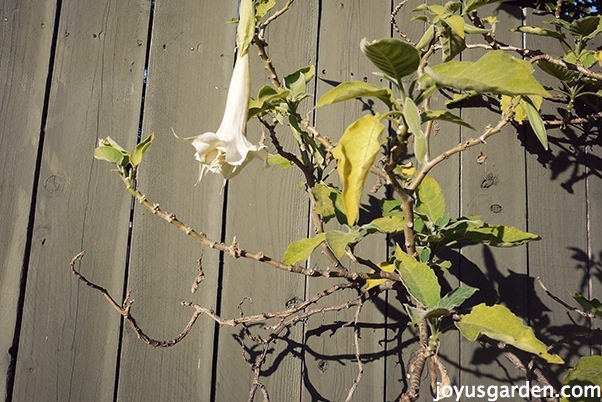 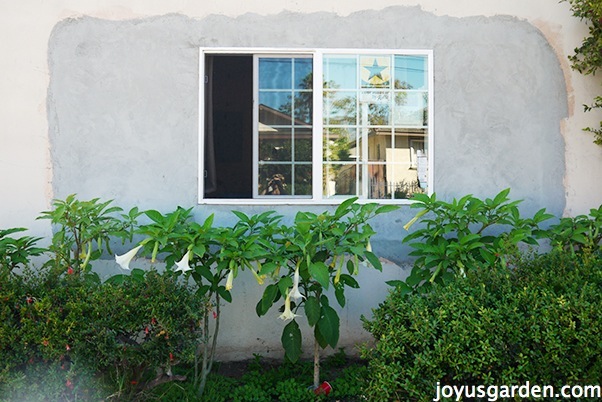 Previous Post: « Simple Centerpiece Ideas Using Garden Flowers
Next Post: How To Care For and Repot A Ponytail Palm »