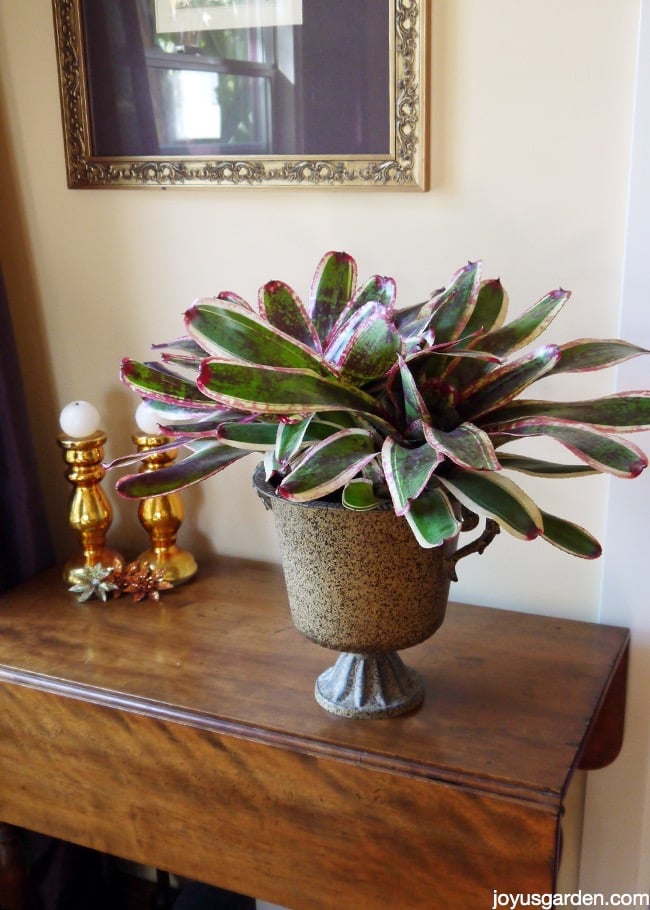 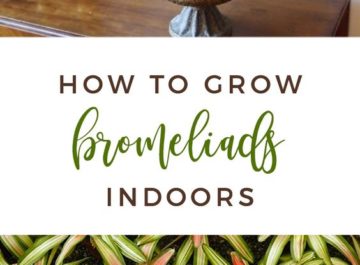 Bromeliads are tough, interesting and don’t require much fuss. That’s my kind of plant to have in a climate where gardening is a year-round activity. They’re a very popular houseplant so I want to share with what I’ve learned over the years about caring for them indoors.

Oh Bromeliads, how I  love you!  I’m so happy that I’m able to grow a variety of these pineapple relatives in my garden here in Santa Barbara.

I started out my post-college horticultural career as an interior plant technician, which is a fancy name for someone who runs all over the place and takes care of plants in offices, lobbies, malls, hotels and even airports.

Granted these aren’t the most welcoming environments for plants which are native to the subtropics and tropics, but in all cases, the bromeliads certainly held their own.

They were sold as “color plants” and certainly were a lot more long lasting and much more forgiving than begonias, azaleas, mums and the like.

The flowers on Neoregelias are very tiny (& they appear deep inside the cup) but their foliage is the main draw.

I’m hanging out on my back patio talking Bromeliads:

I’ve not only cared for and placed 100’s of Bromeliads on commercial accounts but I’ve also grown them as houseplants too.  I’m happy to share what I’ve learned with you:

Like many other tropical plants brought indoors, bromeliads like nice, bright light but no prolonged periods of direct, hot sun.  In nature, they grow under the canopies of other plants where it’s bright but direct sun is limited.  They’ll survive for a while in lower light conditions but need a fair amount of it to bring out the color and initiate flowering and pupping (their process of making babies – see Propagation below).

It’s a bit vague without getting into foot candle measurements but you want your Bromeliad to be somewhere near but not in a window or windows with a west or south exposure.  During the darker months, you may have to move it to a spot that gets more light.  In commercial accounts, they were rotated out on a monthly basis so the exposure wasn’t as big a deal.

I’ve found that bromeliads like a good watering every month.  Water the growing mix thoroughly & then let it all drain out of the pot.  The majority of bromeliads are epiphytes (meaning they grow on other plants, rocks, logs, etc & not in the soil) so never keep them soggy or let them sit directly in water.  Keep the cup, which is center part aka the tank or reservoir, 1/4 to 1/2 full of water at most.  Be sure to flush out the cup every month or 2 as bacteria can collect in the dirty water.

In the cooler, darker months back off on the watering, to maybe every 2 months, & keep the cup 1/4 full to almost dry.  You don’t want your Bromeliad to rot.  Bromeliads with a cup (like Aechmeas & Neoregelias) are susceptible to salt damage which occurs because of the water quality or over fertilizing.  Although most tap water is just fine,  yours could possibly have high amounts of salts & mineral, so in that case, use rain or distilled water.

Bromeliads love rich, organic matter in their soil but they must have excellent drainage.  If you have Cymbidium orchid mix, then you can use this for potting up your Bromeliads too.  I use a mixture of succulent & cactus mix, orchid bark, worm castings, & compost.  Another good additive is coco coir, which is a more environmentally friendly alternative to peat moss.

Bromeliads have a small root system so you don’t have to worry about repotting them too often.  Every 4-5 years is probably just fine & you only need to go up 1 or 2 pot sizes.  And, it’s best to not repot them in the cooler months when the roots are resting.

This is Aechmea fasciata, the Bromeliad that was the most popular in my interior plant-scaping days.

Bromeliads aren’t fussy & don’t need much if any fertilizing.  If you feel the need to feed them, then use a balanced liquid fertilizer or an all purpose orchid food diluted at 1/2 strength in the spring or summer.  There are fertilizers which are specially formulated for bromeliads but whichever you decide to use, don’t over fertilize them!

Temperature isn’t too important as bromeliads tolerate a wide range of temps.  Mine grow outdoors & our winter months can get into the 40’s & into the 80’s/90’s in the summer/fall.  Humidity is more important as these plants are native to the subtropics & the tropics.  If your home is really dry, then mist them a couple of times a week or grow them over a tray filled with water & pebbles to up the ante on the humidity.

The easiest way to propagate Bromeliads is by removing the pups (the little babies that appear off the base of the mother plant) & replanting them.  If you’re new to this, you might want to wait until the pups are a fairly good size so roots have formed.  I’ve also removed pups when they’re smaller & planted them with success.  Growers also propagate them by seed but it’s a much, much more tedious process.

Guzmanias have bright, showy flowers but their foliage is rather plain.

These plants require very little pruning which makes me very happy.  A bottom leaf will occasionally die – simply remove it.  If your bromeliad has a flower stalk, like an Aechmea or Guzmania, then prune it off after it has died.  At some point the mother plant will die (but don’t be sad – remember, I said new babies will appear) & you’ll need to cut that off after it completely goes.

Yes, bromeliads come in a variety of colors.  Some have a stalk with a large showy flower atop it while others have small flowers which appear deep inside the cup.

Mine have never gotten any pests whether they were growing indoors or out.  They’re most susceptible to mealy bugs & scale.  You can wipe the mealy bug off with alcohol & a cotton swab.  Scale can be removed with your fingernail or a dull knife.  Don’t use an oil spray (like horticultural or neem oils) on your Bromeliads as they can smother the plant.

This is Pink Quill Plant, which actually has the genus Tillandsia (along with its other Air Plant friends).

Here’s a head’s up if you have kitties: they love to chew on those crunchy leaves but the good news is that these plants are considered non-toxic. Other than that, bromeliads make a fine houseplant and are as easy care as it gets. As a matter of fact, there are some bromeliads I’ve had my eye on so I think I need to add to my collection soon!

More Neoregelias.  These are my favorites – I love the patterned foliage.