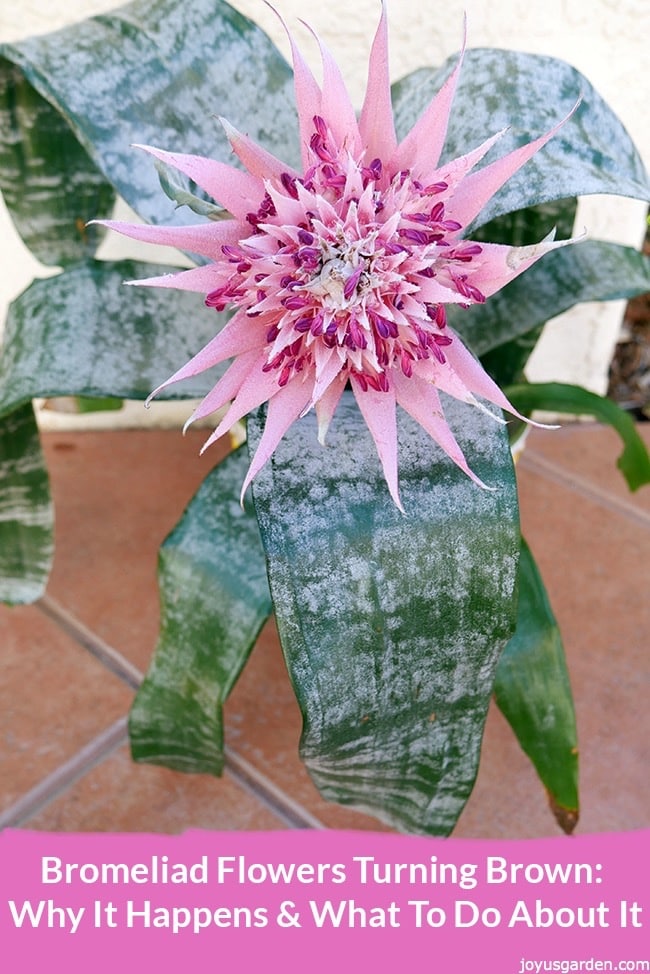 After 4 months of looking good, the Aechmea inflorescence is starting to turn brown in the center. It’s been this way for about a month now & will last about a month more.

Flowers are so beautiful and bring so much joy into our lives. We wish the flower fairy would flutter on down and place them into every room of our homes every week. How sweet that would be?! Bromeliads, though not as awe inspiring as a huge arrangement of fresh flowers, come in interesting colors and patterns and make fine houseplants. They do flower and those flowers last for at least 3-4 months. This is in response to a couple of questions I’ve gotten about bromeliad flowers turning brown. Here’s why it happens and what you can do about it.

Should the flower be left on? Will it bloom again off that same stalk? Should it be cut completely off? Like other flowers, sadly they eventually die. In the case of bromeliads, it’s actually the inflorescence which provides the color. The flowers are small.  Most plants will repeat bloom, some throughout the season and some every year, but that’s not the case with bromeliads. The mother plant blooms, the flower dies, pups (babies) form at the base of the mother and a part of the plant lives on. It’s all part of the natural life cycle of a bromeliad.

Bromeliad flowers turning brown: here’s how to prune them off:

The guzmania, which you see me pruning the flower off of in the video, was the 1st one to turn totally brown. My aechmea flower is just showing a bit of brown in the center and the vriesea stalk has turned from vibrant orange to dark green. The quill of the pink quill plant has now turned lime green and the neoregelia looks great even though the tiny flowers inside the vase or urn (the central cup) have long died. 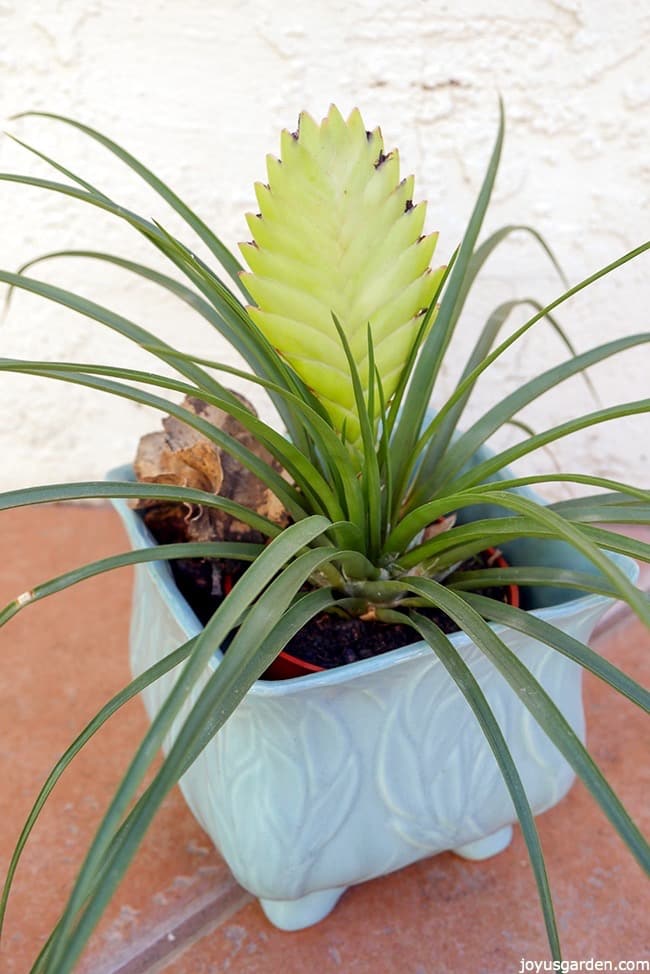 The quill of the Pink Quill Plant has turned from pink to green. This happens but overall it looks great. I don’t mind this color at all.

The aechmea, vriesea and pink quill plant flowers will all look good for at least the next month. I don’t mind at all that they’re loosing their color. The neoregelia, grown for it’s showy foliage rather than the flower, sits in my bathroom beneath a skylight and makes me smile every time I see it.  Most bromeliads are sold with their flowers already open (that’s their big draw after all) so try to buy them as fresh looking as possible. A flower which has even tinges of brown on it is already starting to decline. 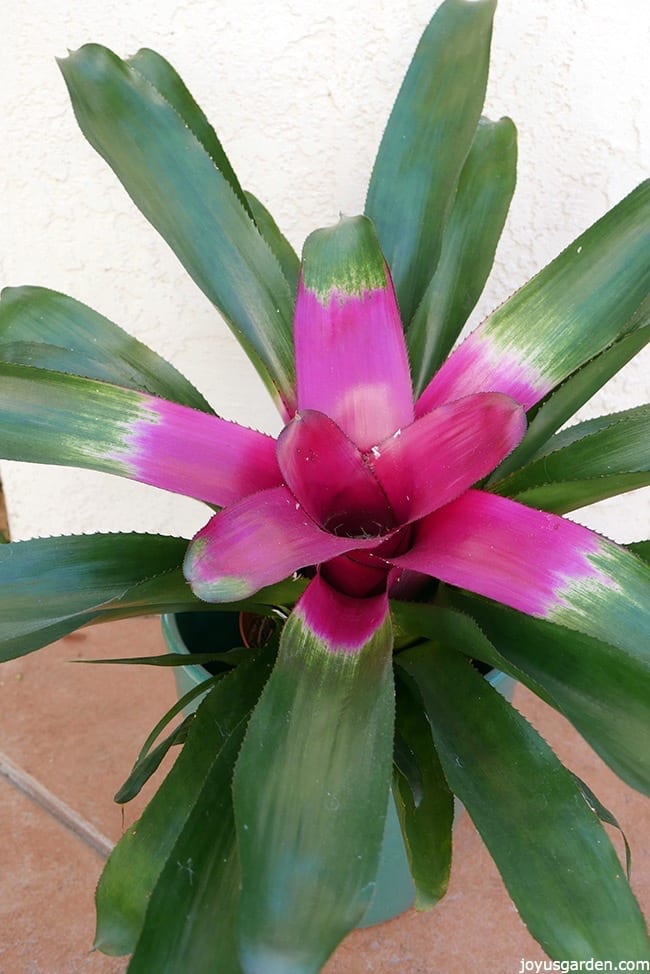 The neoregelia doesn’t have showy flowers at all. In my experience, the mother plant of this genus is the longest lasting.

By the way, I bought a few of these bromeliads at the end of December and the rest in early January. These pictures were taken at the beginning of June. 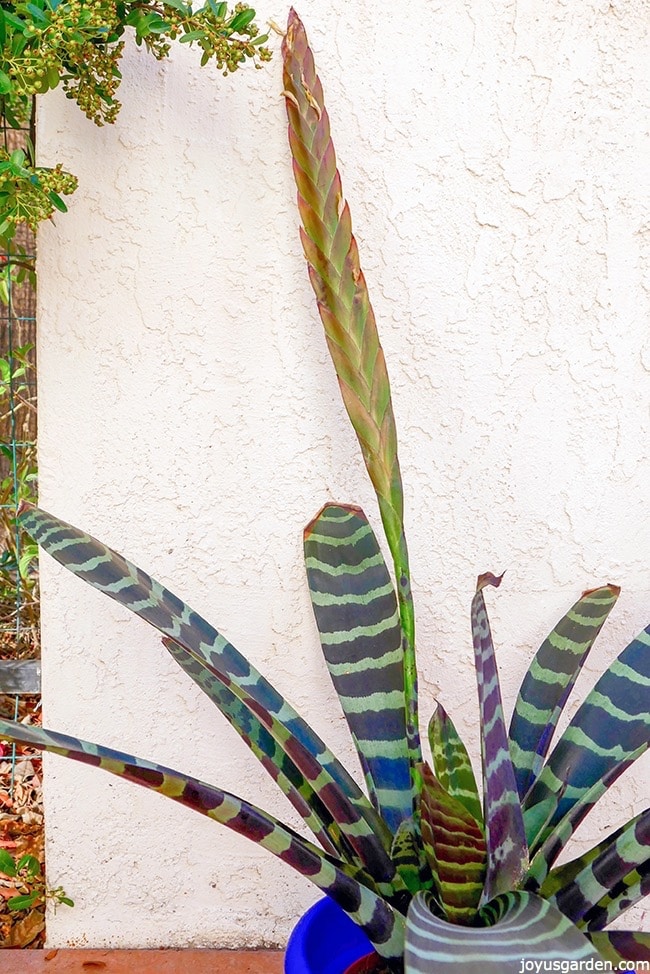 The vriesea inflorescence has turned green. There are a few small patches of brown on it. It doesn’t look bad so I won’t cut it off for at least a month or so.

If you’d like, cut off the flower inflorescence and the entire stalk when it 1st starts turns brown if it’s bothering you.  The plant won’t suddenly die after cutting it off.  That takes a while and the mother will look good for quite some time after. I let the guzmania flower go totally brown for the sake of the video.

Propagating a bromeliad is simple. After the mother plant goes through its life cycle, simply cut or pull the pups off after they’ve matured.  It’ll take those pups 3-6 years to flower so don’t expect it to happen soon. If you want your bromeliad to be constantly in bloom, you’ll have to buy a new 1 in flower on a regular basis. Just know that they last much longer than cut flowers!

Happy gardening & thank for stopping by,