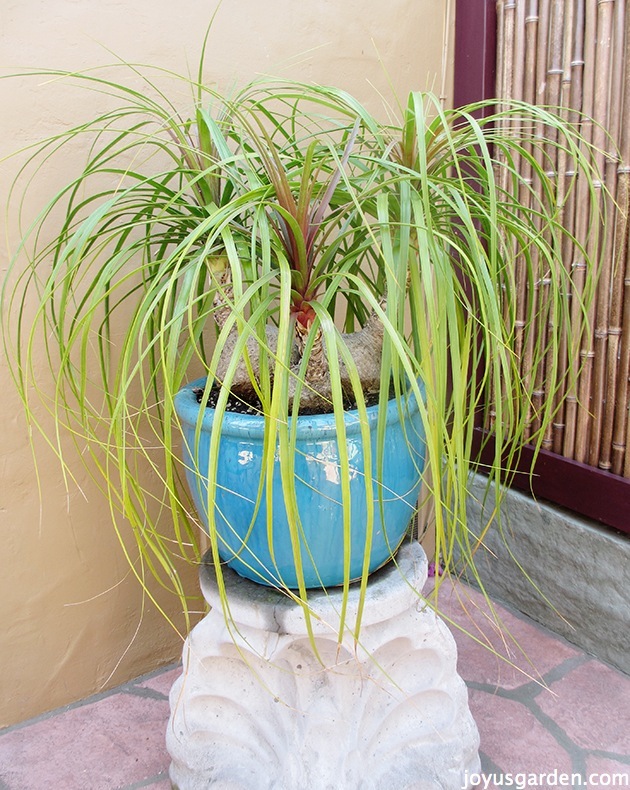 Today, I want to show you how to care for and repot a ponytail palm

I bought this plant as a little specimen in a 6″ pot at our Santa Barbara Farmers Market 7 years ago. I put it in an 8″ terra cotta pot when I got home.

Then, a few years later, into the 13″ turquoise glazed pot it went. I could tell it was now feeling a bit stunted (how much would be made evident after I took it out of that pot) so another transplant was in order. Here’s some info about this “really cool” plant, care tips both as a houseplant and in the garden along with the steps I took to re-pot my 3-headed Ponytail Palm.

If you’re only interested in how I care for my Ponytail Palms, then scroll about halfway down. As usual, there’s a video at the end.

Ponytail Palms grow slowly but need pots large enough to hold their bulbous bases. Those bulbs store water so as the plant grows. You need to be a muscle man (or woman) to lift a large Ponytail. The tallest I’ve seen was 15 feet, and the bulbs were huge. I wouldn’t want to move that!

Here’s a Nolina enjoying the great outdoors at the Los Angeles Arboretum.

Here’s the future deluxe home of the Ponytail Palm before its “jazz me up” paint job. I got this composite 20″ plastic pot at Marshall’s for 22 bucks. It’s good & sturdy – a real steal but a bit too blah for my tastes.

Contrary to their name, Ponytail Palms actually aren’t palms. There’s varying opinion as to what plant family they’re classified in – the Asparagus Family or the Agave Family.

To further confuse things, I learned the botanic name as Beaucarnea recuvata but some people list it as Nolina recurvata. Confusing – the nomenclature and classification of this plant are definitely not cut and dry.

Sitting on its pedestal in the pretty pot, root bound as can be.

Ponytail Palms act more like succulents as they are drought tolerant. That round base is their water storage mechanism and they’re often seen growing alongside cacti.

Here’s how I re-potted the Ponytail Palm:

This is why we had a hard time getting it out of the pot. Like cramming a size 10 foot into a size 6 stiletto!

A hairdresser I am not but this updo keeps the leaves out of the way while I’m doing this.

Here is the rest of how to care for and repot a ponytail palm:

I top dressed the soil in mussel shells I collected on the beach (I found them empty – no mussels were harmed!) & sprayed them to match the pot & added green glass disks to shiny things up.

Here’s my Ponytail in the purple/blue custom-painted pot with its new Burro’s Tail Sedum friends that were taken as cuttings from my front garden.

As far as houseplant care goes, a Ponytail Palm couldn’t be any easier. This is one plant which is tolerant of the dry air our homes are notorious for.

The two most important things to know regarding having this plant in your home are: it needs high light and you must keep it on the dry side.

High. 5 to 6 hours of direct sunlight a day ideally a few feet away from the window. And, rotate your plant every few months so it get light evenly on all sides.

Low. Once every 3-4 weeks at the most. If it’s in a really small pot, then it will need it a bit more often.

Susceptible to mealybugs & spider mites. If the infestation is not bad, a good spray down in the sink or shower will get rid of both. Be sure to spray the undersides of the leaves & in the nodes.

Ponytail Palms, unlike many other houseplants, are not toxic to pets.

They are great for people who travel because of their ease of care.

As they grow, they develop a beautiful trunk & become quite interesting.

They do grow very slowly, especially in homes environments. So if you want a larger one, buy it that one. That being said, tall Ponytail Palms aren’t always easy to find in the interior trade.

Because they store water in their bulbs, they are easy to overwater. Don’t!

Cats love to chew on their crunchy foliage.

Here’s my other Ponytail Palm which lives in the front garden.

My two Ponytails live outdoors all year long and the more I ignore them, the better they seem to do. They grow in containers on my patios and I water them really well every 4 weeks. I do treat them to a worm casting/manure tea blend once in early Spring and once in late Summer which keeps them happy as can be. I repot them every 3 years (or so) because they have a multitude of fleshy roots.

You should get one of these Cousin It look-alike plants. They’re fun to look at and easy to take care of. Be sure to check out our houseplant care book, Keep Your Houseplants Alive

because the Ponytail Palm is in it. If you don’t have enough light for this one, then you’ll find another plant in the book which suits you and your home to a T!

I just wanted to show you these few pics from a couple of years back when a monarch hatched off this plant:

The caterpillar came from the butterfly weed in the backyard & climbed up the pot.

After a few days of crawling around, it attached itself to one of the leaves.

It morphed into a chrysalis (you can see the butterfly inside) & 1 day, it was gone.

For more information about this houseplant and others, you can check out our book: Keep Your Houseplants Alive