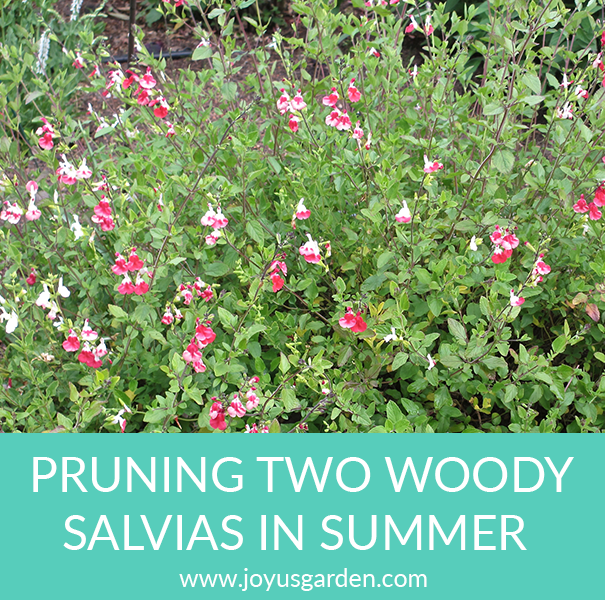 Salvias, like other perennials, grow like crazy and give us lots of blooms during the season. They need to be cut back for overall form, health and repeat flowering. The 2 salvias that you see here were way overgrown, hadn’t been cut back the previous season at all and needed a good haircut. It should have happened in spring or fall but the gardeners missed it. This is all about pruning salvias in summer.

I recently flew up to the San Francisco Bay Area for an 8-day gardening marathon. Holy moly that done wore me out! My client, the only one I still work hand’s on for, put out an SOS call because of the overgrown state of her many plants.  An alternate title to this could have been: How To Prune Overgrown Woody Salvias.

Because the garden had turned into a jungle, I concentrated on the larger anchor plants like rhododendrons, camellias, lophomyrtus’, viburnums, weeping pussy willow tree, roses, camellias, etc 1st to see if I had enough time to work on any of the perennials. I did, and these 2 salvias were amongst those which got pruned the day before I left.

This was not 1 of my artistic prune jobs. I was pruning to hopefully get the plants back in a better shape and stimulate healthy new growth along with more flowering. The FR definitely looked better after its pruning than did the HL which still looked like a ratty mess, just a smaller 1. Sometimes when perennials are that far gone or look bad, it’s easier to replace them.

I usually don’t do as extensive a pruning in summer as I did here. I save that for fall or winter. Because these hadn’t been cut back in over a year, a harder pruning was needed. Be careful not to cut an older salvia back too far (both of these were planted at the same time around 6 years ago) or it won’t recover. I learned this the hard way the 1st time I pruned an over salvia – it bit the dust. 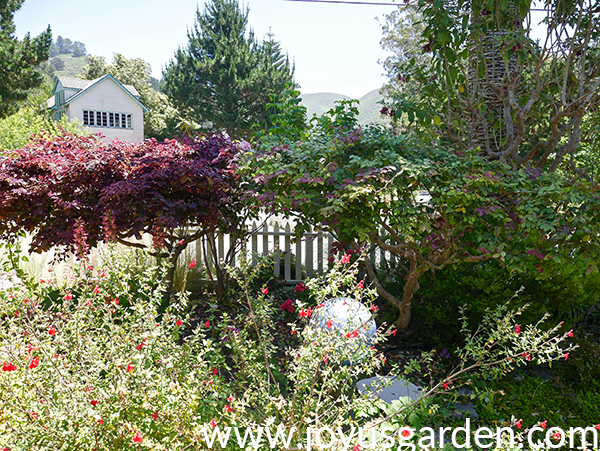 You can see Furman’s Red blooming a bit in the foreground. It was taller than the gazing globe! (note: most of these photos were taken in the bright sun so pardon the over exposure).

The “Furman’s Red” has thicker shrub-like stems so I pruned it a bit differently than the “Hot Lips”. I pruned the FR back by 1/3 to 1/2 and the HL (which was a ratty mess!) by 1/2. In this temperate coastal California climate woody salvias can put out 3 blooms per season so the prunings I do in summer are more like dead-heading.

I 1st surveyed the Furman’s Red to see how I wanted it to look and grow. It was a wild 4′ by 4′  mess and was blocking the view of the perennials behind it. I started by taking out a couple of outer stems and worked my way in and around the plant. Some of the stems I took out completely to open the plant up and some I just cut back. 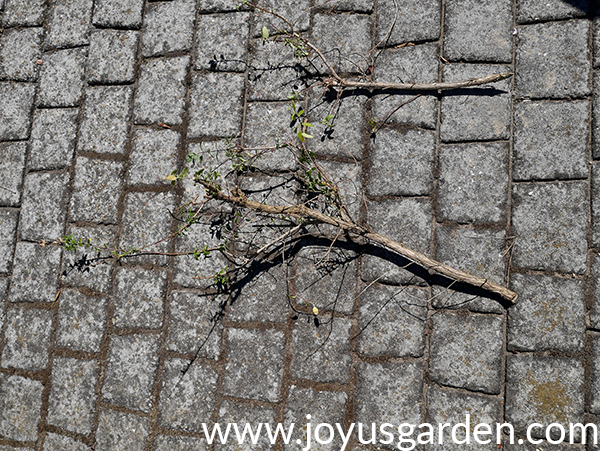 A couple of those larger stems. It’s good to get rid of them (on an established plant) to open up the center a bit.

Out came the branches which crossed over and along with any dead growth. There were some awkward nubs with quite a few small branches growing out of them. I cut those out too. Finally, I tipped the remaining branches by 1-3″ to get more fresh growth. 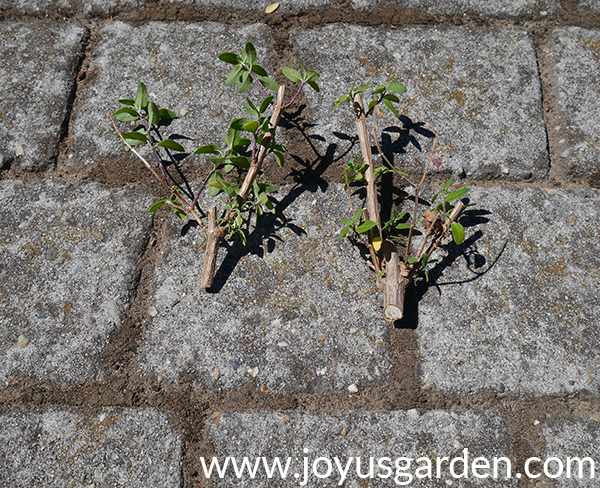 These are the nubs I’m talking about. If you don’t cut some of them out, there’ll be a lot of “bunchy” growth at the top.

The overall form is slightly lower on the perimeter of the salvia with the middle branches a bit taller. I never prune anything “even, even” because that’s not how plants naturally grow. It’s the look I prefer. 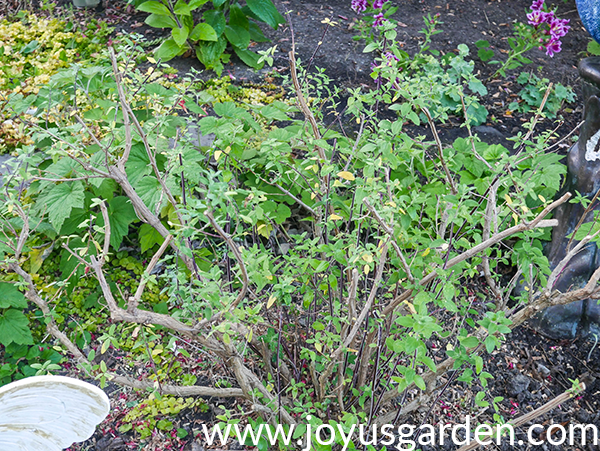 Furman’s Red after the pruning. I took it down by about 1/2 but there’s still plenty of growth on it. This 1 will come back fine; Hot Lips I’m not sure about!

As for the Hot Lips, it sure was a hot mess! The plant was overgrown and really did look like a rat’s nest. I truly would have replaced it at that point but I was flying out the next day and didn’t have time to go get a new one. It probably could have been cut with the hedge pruners but that’s a tool I don’t use. I much prefer my trusty old Felcos.

Hot Lips was a mass of tiny stems. Many were of those dead along with larger chunks in the middle.

Because this plant had a multitude of small branches, I pruned it pretty much straight across. There was quite a bit of chunky dead growth in the middle so out that came. I took the perimeter stems down a bit and called it a day on this 1. Honestly, it didn’t look any better than before I pruned it! My client is going to let me know how it comes back. 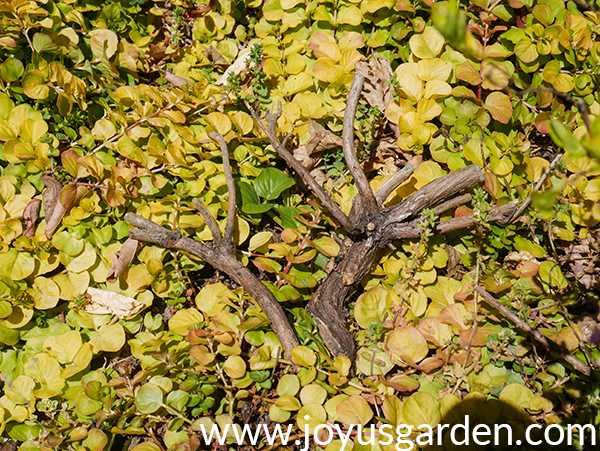 Some of the dead growth I found inside Hot Lips.

It’s best to give salvias their big pruning in fall or spring. Depending on how long your growing season is, they’ll need at least one more lighter pruning. Think of it as deadheading.

Pruning salvias encourage the fresh growth which brings on the flowering. No pruning = little or no flowers.

With these woody salvias, don’t cut below the point of no growth. If you cut an old salvia back too hard, it probably won’t recover.

Besides the Salvia greggiis & microphyllas, other woody salvias that I know of are Salvias chamaedryoides & coccinea. To find out which type of salvia you have, there’s a much more complete listing here.

After 5-7 years, you might have to replace your woody salvia. In this garden, the woody salvias have been replaced a couple of times. The deciduous herbaceous salvias are different story because you cut them all the way back & fresh growth emerges every year.

Pruning 3 Types of Salvias In Fall or Summer will help you to better understand all of this. I always pruned salvias growing along the coast of California in fall.

Make sure your pruners are clean & sharp. It’s better for the plants & easier on you. 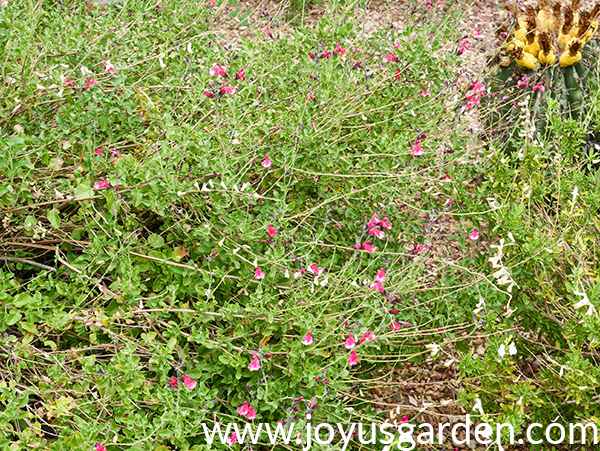 This was taken at a park here in Tucson. I believe this is Salvia microphylla “Pink Blush”. These plants are so overgrown that the center growth has fallen on the perimeter growth. Because of this, the flowering is minimal & scattered & dead flowers remain on the plant. 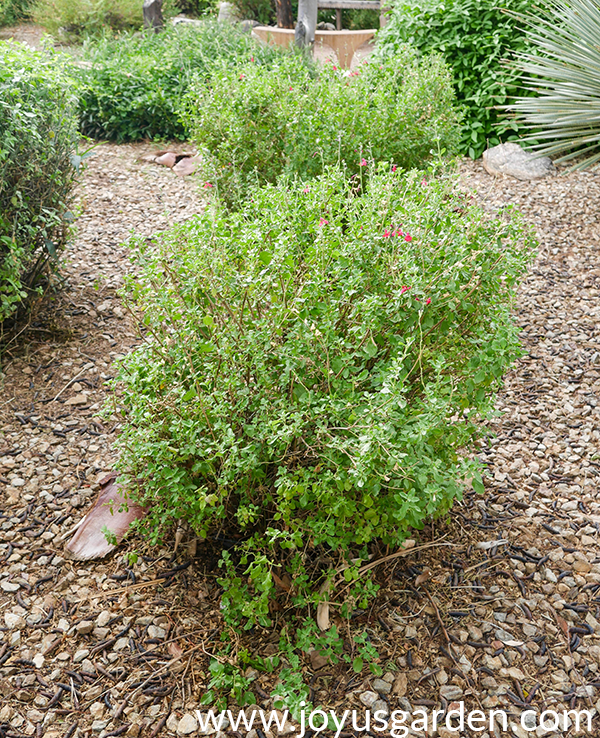 Taken at the same location as above. Please don’t prune your Salvia greggiis like a rectangular blob!

If you have plants in your garden, they’ll need to be pruned at some point. Salvias are no exception and these popular perennials and shrubs bloom and look so much better with regular pruning. And, the hummingbirds will thank you!

Previous Post: « Planting Aeoniums: How To Do It & The Best Soil Mix To Use
Next Post: Pruning and Propagating A Burro’s Tail Succulent »