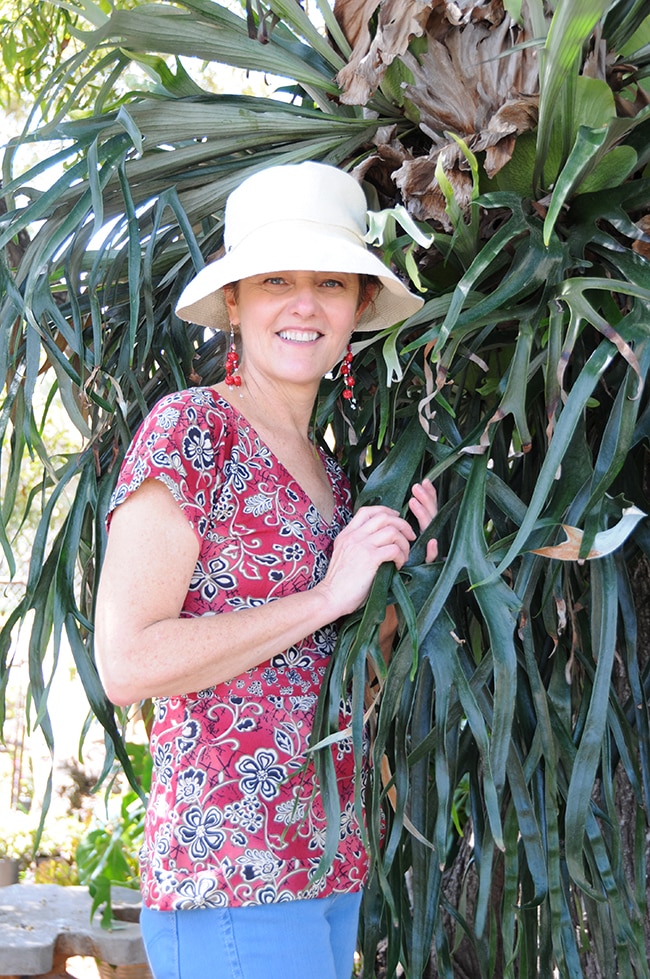 I love staghorn ferns … each one is a horticultural work of art, truly. I remember distinctly when I first saw a staghorn fern. It was in a design or architecture magazine and there were several of them hanging on a wall stealing the show from all the furniture and artwork and I thought … “wowza”.

Then, I had my first up close and personal meet and greet with one in a greenhouse in Connecticut and my heart went pitter patter. But, it wasn’t until I moved to Santa Barbara that I got one for my very own and discovered how very easy they are to grow.

Platycerium bifurcatums, interchangeably called both staghorn and elkhorn ferns, are easy to grow outdoors that is. They aren’t quite as easy (you can almost neglect one outside) but by no means impossible to grow inside. I’ll get to the indoor care a few paragraphs down.

I wanted to film a video about caring for these wild and wacky ferns but thought why do it in my garage or garden when I can do it in the little horticultural eden created by The Horticults. Two green thumbs up, they were game to do the video so be sure to check it out at the end of this post.

Here’s Ryan, half of The Horticult, making an adjustment to the staghorn wall underneath the tangerine tree.

That’s me hanging out under my orange tree. My staghorn is still in a pot but I’m going to mount it on palm debris in the next few months. Stay tuned for that video!

Ryan and I talk about how we each care for our staghorn ferns in the video but I’m going to outline it here too. Keep in mind that I live in Santa Barbara and he’s in La Jolla so they thrive in our coastal Southern California climate.

Bright shade or filtered light, like under a tree. Just know they will burn in direct sun. This is not a plant for the California or Arizona desert. My staghorn fern sits on the sunny patio off our office where a low bamboo fence shades it from direct sun. The Horticult’s ferns are hanging on a fence where they’re shaded by a tree.

I water mine once a week. Because I live 7 blocks from the beach, it draws some moisture from the air. They prefer to be drier than wetter. If yours is hanging, it’s tougher to overwater than if it’s in a pot. They are epiphytes after all, just like orchids & bromeliads.

Nice & rich but well draining. For mine in the pot, I used an equal mix of potting soil, compost & orchid bark chips with a couple of handfuls of worm castings mixed in.

Here are a couple hanging back to back in the tropical greenhouse at the LA Arboretum.

The staghorn ferns are tougher, in all ways, than you might think. They are cold tolerant to 27 degrees. Conversely, they don’t like it hot & dry.

In nature, they grow in trees in the tropics where they pull nutrients from the air. Because Santa Barbara is not a tropical rainforest, I top dress mine with worm castings every Spring for a little nutrient fix. Also, in April & August I water in some seaweed extract which is basically processed kelp. I’ve read that staghorn also like a combo of fish emulsion & banana peels.

A frond (fern speak for leaf) occasionally turns yellow but that’s about it. My trusty Felcos don’t get a workout with this plant!

Mine has never gotten any in the 4 years I’ve had it. I’ve heard they can be susceptible to snails, slugs, mealy bug & scale.

A platycerium to be adored – her gown touches the ground! This pic was taken at Lotusland in neighboring Montecito. Maybe mine will be this big in 50 years!

Design-wise, they’re fun to play with. Staghorns can be mounted on wood or directly onto a tree (like the one pictured above). Put 3 or 4 in a large wire hanging basket and it will turn into a platycerium globe. Or, like I’m doing with mine for the time being, you can grow them in a pot.

Below you’ll see 3 Platycerium superbums which are commonly called Moosehorn Ferns. Their fronds and shields are ginormous. They’re a little fussier than the staghorns and not as tough. Regardless, they’re sighted occasionally around Southern California, usually in a protected spot.

Here’s a big red flag: Those round basal fronds (leaves in case you forgot) at the base of the staghorn ferns eventually turn brown. Resist the urge to cut them off because they serve two really big purposes. They not only shield the foliar, deer horn like fronds and roots but also take up nutrients for the plant. Don’t remove them!

As mentioned above, they aren’t easy peasy indoors like a snake plant or pothos but they aren’t impossible. If you travel a lot, you might consider making another choice. Here’s the scoop on caring for them as a houseplant:

As bright as possible with little direct sun. Their favorite is an eastern exposure.

In the active growing season (those warmer months with more light) water every 7-10 days. Make sure to not overwater because it will rot them out. In the cooler months, back off with the watering, perhaps every 10 – 14 days. If yours is on wood or a piece of bark, you can take it to the sink & soak it for a few minutes. If it’s wet even though it’s been 14 days since you’ve watered it, don’t. Get the picture?!

See soil above, & it’s even more important to make sure the soil drains very well if it’s indoors.

This is my staghorn which I have temporarily planted in a vintage daisy pot from the 50’s (love this pot by the way!). And yes, that’s lobelia which has snuck its way in there. It seeds like crazy all over parts of my garden.

Staghorn Ferns are native to the tropical rainforests, an environment which your home is probably not. They would love to be misted a couple of times a day but as we know, probably not gonna happen. The best places for your ferns to hang out would be the bathroom or the kitchen where the humidity is a bit higher.  Mist them 2-3 times a week and be sure to keep them away from heaters & air conditioners.

They could get mealy bug, scale or where your air is extremely dry, spider mites.

Here’s another red flag: Don’t wipe off their fronds with vim and vigor because you’ll take off that waxy coating. It holds the moisture in for the leaves. A light dusting is the ticket if yours needs it.

Hanging out with the lovely & enchanting Ryan & Chantal, aka The Horticult, post video. And yes, cocktails were needed to recover from the arduous filming!

So, if you see an impressive Staghorn Fern, pull out your camera, jump right in and take advantage of the photo op. They make a stunning backdrop!

Here’s where you can find The Horticult

note: pics not watermarked were taken by The Horticult

Finally, you arrived at the video.  Also thrown in the mix with staghorn fern care is a bit about how Ryan mounted theirs:

Here’s a short video I did for eHow.com on pruning a stag horn fern: