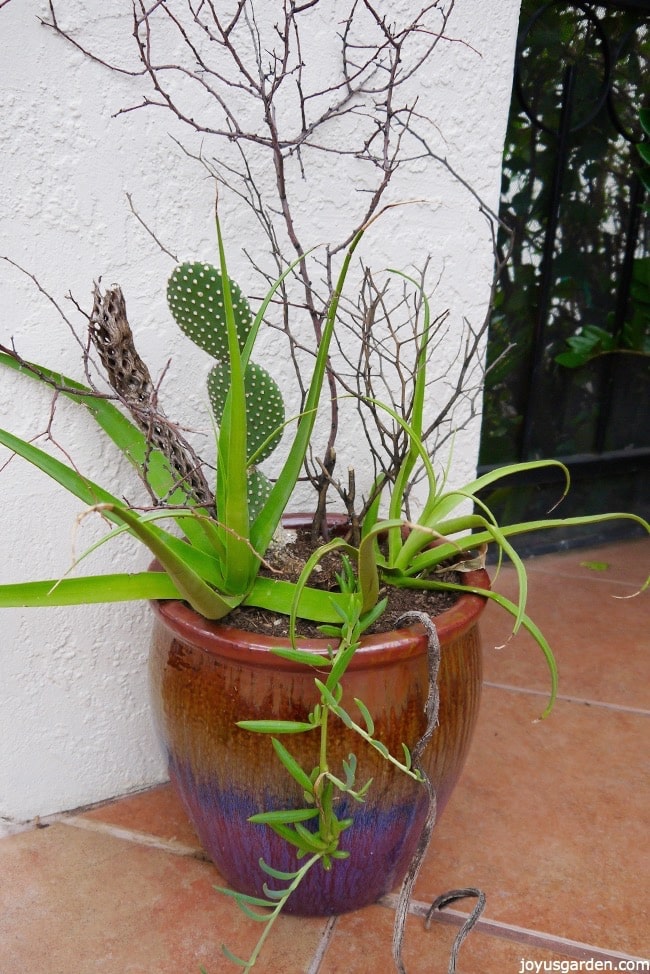 This very cool succulent, which grows in a slightly twisted and arching form, certainly creates a unique and striking silhouette. Unlike a lot of agaves, of which there are upwards of 200 varieties, this one stays relatively compact and is suited for containers. Agave bracteosa (Spider Agave), Squid Agave and Candelabrum Agave is a favorite of mine. It makes my heart go pitter-patter and I’m going to give you 7 reasons to love it too.

This is the mother plant in my Santa Barbara garden. As you can see, the pups have spread like crazy, even in between the rocks.

This Spider Agave was very slow to take off but once it did, it produced numerous little plants (commonly called pups or babies) from its running roots.  I needed to repot those pups taken from the plant above and brought to my new garden in Tucson.  In the 1st part of July I noticed that the lower leaves were rotting out.  Say what, in the desert in the summer?! Time to take action and transplant it into a new home so this is what really prompted me to do this post and video.

You can see how I transplant my Spider Agave & find out why those leaves “mushed out” in mid-summer. Get some care tips too:

7 Reasons to Love this Agave

First and foremost, this is a user-friendly agave. Unlike most other agaves, you don’t need a suit of armor to work with this 1. It has no spines, teeth or pointed tips & the leaves are fairly flexible and smooth. I’ve been jabbed by so many other types of agaves which always resulted in redness & irritation.  The Spider Agave is a joy to work with!

2.) It has major character.

It’s crazy & wacky growth habit adds interest to any garden.  And, it combines beautifully with so many fleshy succulents like crassulas, sedums, senecios, etc

3.) It doesn’t die after flowering.

The Squid Agave doesn’t die after flowering like all the other agaves which are monocarpic (meaning they flower only once & then die). It flowers infrequently but lives on after it does.

It’s a great container plant.  Although I’ve never grown 1 indoors, I bet it would make a fine houseplant if you had high light.

You want more Spider Agaves? No problem!  If yours is growing in the garden, get ready for it to pup and provide you with many new plants. In a container, not too many if at all.

It has not 1 but 3 great common names: Spider, Squid and Candelabrum Agave.

Last but not least, it’s a breeze to maintain.

Here’s the pot the agave was in. The soil & the agave had sunken down low which caused the summer monsoon rains to rot out those lower leaves.

How to Grow Squid Agave

Speaking of maintenance, here are a few things to know about the Squid Agave.

Full sun is best unless you’re living in the desert, like me. I plan to give mine a few hours of afternoon shade.

The Spider Agave is drought tolerant & requires infrequent watering once established. If you live someplace hot with abundant sunshine, then you’ll need to water it more often. If it’s in a pot, water it thoroughly until the water all drains out. Water again when the soil is dry.

Like all succulents, this 1 needs a mix that drains well. I mixed sandy loam into my garden beds in Santa Barbara to amend the drainage. When I repotted the 1 you see here, I used succulent & cactus mix with a few handfuls of organic compost & worm castings mixed in.

I never fertilize any of my succulents but I do top-dress them with worm castings and sometimes compost every spring. A balanced fertilizer like 10-10-10 applied in the spring would be just fine.

The Squid Agave is hardy to 10-15 degrees F. I’m happy that mine will be just fine outdoors all year long here in Tucson.

I’ve never seen it with any but keep your eye out for mealybugs & scale.

For an agave, this 1 stays relatively small.  It gets about 2’x 2′ but spreads by rhizomes which creep underground then pop up & produce those pups.

The easiest way is by removing the pups (baby plants) & replanting them.

The Spider Agave is a great container plant & can be used in garden beds, by the sea & poolside.

These are Octopus Agaves which are the big brothers to the Squid Agave. Although they have no spines, their leaf edges are sharp. These, like other agaves, die after flowering.

I love this very cool agave which now sits on the patio right off my kitchen, and I am so glad it’ll do well here in my new garden.  As I said in the video, I imagine it would make a fine houseplant because it stays smaller and does well in containers.  Have you ever grown the Squid Agave as a houseplant?