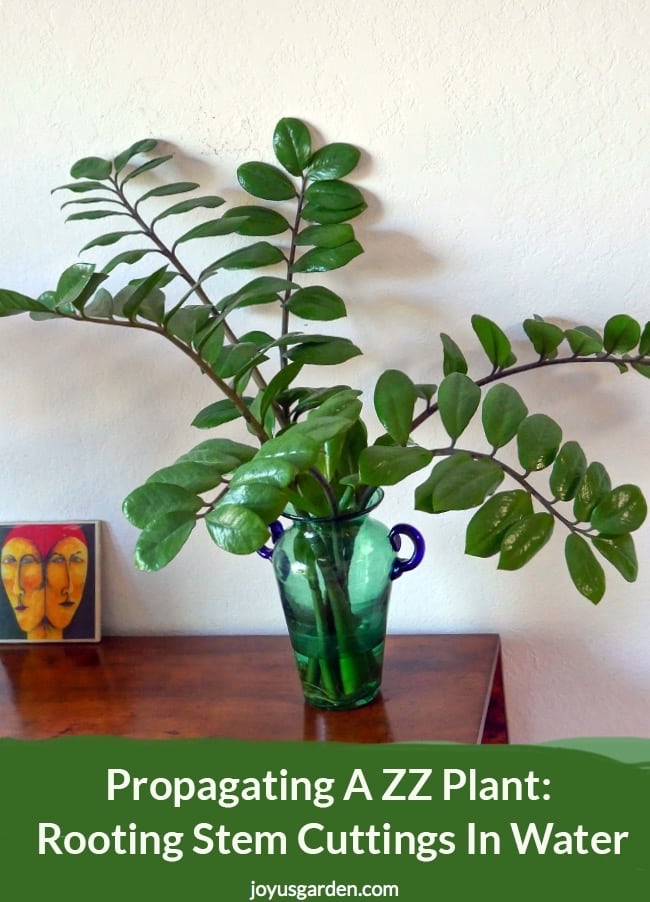 I divided my humungous ZZ Plant into 3 separate plants several months backs quite successfully, thank you very much. I’d never done this before so I was a bit apprehensive to have at it with the pruning saw and cut some of those big tubers in half. All of the plants are doing great which is a salute to how tough the ZZ really is. 5 or 6 long stems broke off in the process so I decided to get on with propagating my ZZ Plant by rooting these stem cuttings in water.

I’d never propagated long stems of a ZZ Plant in water before so I was curious as to how it would go. The stems are soft and fleshy leading me to believe they might rot out. Oh not so! It’s definitely not a fast process and the majority of the stems aren’t showing roots after 7 months. That doesn’t bother me because they look great in the urn vase and aren’t showing a brown tip or a bit of discoloration.

The results of propagating a ZZ Plant by rooting stem cuttings in water:

The stems you see in the green vase are 28″ long, give or take a bit. A few short stems (around 8″) also broke off and they started showing roots in 3 or 4 weeks. I planted them up after 8 weeks and gave the new plant to a friend. If you’re in a hurry, go with the shorter stems. On the flip side, it will take them longer to grow tall so the choice is yours my friend.

The root growth on the short stems after a few weeks. Once it appeared, the roots developed fast.

Things which are good to know:

I took these stem cuttings (except the 1 with the string) in late May. It’s now mid-January as I write this. It’s not a quick process with these long ones, that’s for sure.

I let the fleshy stem cuttings heal over for about an hour before putting them in water. Just be sure to keep them out of direct sun & hot conditions while doing this.

Don’t fill the vase up with water. I kept around 3″ of water in the vase at all times.

Don’t let your cuttings dry out!

Use room temperature water. I changed it every 2 weeks or so – you want to keep the water fresh.

To the best of my understanding, you can’t root a ZZ Plant by a single leaf cutting. You need to get at least 2-3″ of stem & a couple of leaves for successful propagation.

The stem cuttings, roots & no roots. The 1 on the far right has a string tied around it because I stuck that in the vase about 4 months after the other ones. The majority of the ones propagated earlier aren’t showing roots at all. You never know with plants, that’s for sure!

Here’s a close-up on the 1 with the most roots. To my surprise, little tubers are appearing at the base. That’s why I didn’t want to wait too long to get it planted.

You can also propagate shorter cuttings in a light mix. This takes time also; about 6-9 months to show a decent amount of roots.

ZZ Plants have small spadix type flowers which appear at the base. It makes sense you could propagate them by seed but I don’t know anyone who has done that. Except for vegetables & annual flowers, propagating by seed takes way too long in my book.

I divided my ZZ plant last year & won’t do it again for at least 2 or 3 years.

I planted the well rooted cutting in with my smaller ZZ Plant. The cutting is tall & has a bit of weight to it.  I used a short bamboo stake to hold it up while those roots settle in & provide support. As promised in the video, here’s the link to a groovy & very useful mini -trowel.

The stem cutting with the string broke off the plant in the bedroom. You’ll find that ZZ Plants will do that every now & then – the big long stems just bend & break. Now you know you can grow & root them in water!

Have you ever propagated a long ZZ Plant stem in water? How long did it take? Inquiring horticultural minds want to know!

You can buy a ZZ Plant online if you can’t find 1 locally. They’re glossy & gorgeous & super easy to care for.

« Light Freeze Damage On Bougainvilleas: What It Looks Like and What To Do About It
Add A Pop Of Pizazz To Your Garden With Chartreuse Foliage Plants »