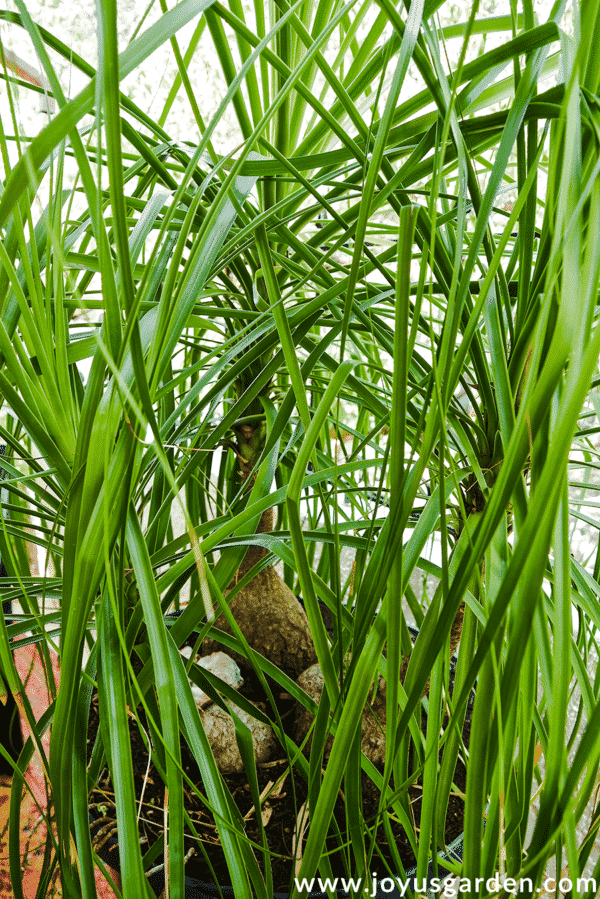 Hello Ponytail Palms; what fun plants you are! I got my 1st, in a 6″ pot standing about 10-12″ tall, when I lived in San Francisco over 20 years ago. Even though it grew painfully slow (the light wasn’t as bright as this plant would have liked) I fell in love with it nonetheless. Here’s what I’ve learned about caring for this unique indoor plant over the years – Ponytail Palm care tips coming your way.

Ponytail Palms, which are also called Beaucarnea recurvata, Elephant’s Foot and Bottle Palm, are actually succulents. This is good to know when it comes to the watering section. My 3-trunked beauty grows on my patio here in Tucson but I maintained quite a few of them when I was interior plant technician. Here’s a post on growing Ponytail Palms outdoors in case you want to put yours out for the summer.

This plant is about as easy care as it gets. They’re the high light version of a Snake Plant!

Ponytail Palms grow very slowly. This specimen, seen at Green Things Nursery, is very expensive not to mention very heavy. Their bulbous bases can weigh quite a lot.

Ponytails are primarily a table top plant. They are considered to be accent plants – a plant which steals the show because of its striking appearance . The taller specimens, which would be floor plants, will set you back a pretty penny. I’ve also seen it in dish gardens & used as bonsais.

They’re sold in the houseplant trade in pots ranging from 2″ to 14″. The larger plants are very heavy because the bulbous bases grow as the plant grows. When growing outdoors, they can reach 15-30′. You rarely see them above 5′ tall indoors.

These plants grow very slowly, especially as houseplants. That’s why the taller ones are so expensive. If you could find a 4′ Ponytail, the cost would average $250. It won’t outgrow its space anytime soon!

This was 1 of my Ponytail Palms in Santa Barbara. It’s more commonly seen in this size rather than the specimen above.

Ponytail Palm Care as a Houseplant

A Ponytail Palm does best in high light indoors. Just make sure it’s not in any or against any hot windows. It’ll tolerated moderate light levels but the growth will be even slower. I’ve found they don’t do well in low light over the long haul.

In the darker winter months, you may have to move yours closer to a light source.

If your Ponytail is getting light on 1 side only & leaning towards the light source, you’ll have to rotate it as needed to get it to grow straight.

I’ll mention again that Ponytail Palms are succulents. The plant stores water in its onion-shaped bulbous base & trunk (or stem). If you over water it, ie too often, then the bulb will rot out as well as the stem. Even though it’s hard on the outside, it’s soft on the inside & subject to a bacterial root rot.

I watered my Ponytail every 3-4 weeks in the brighter months & every 5-6 weeks in winter. It was in a small pot so a larger specimen with a bigger bulb would need it even less.

The above is a general guideline for you – adjust it accordingly. Your Ponytail might need watering less often – this guide to watering indoors plants & houseplant watering 101 post will help you out. Basically, the more light, warmth, & the smaller the pot size, the more often yours will need it.

Larger specimens & those in cooler temps, will need watering less often. Mind the soil mix it’s in too; more on that below.

The bulbous bases of my 3-headed Ponytail Palm. Careful not to over water – these store water.

If your home is comfortable for you, it’ll be so for your houseplants too. My Ponytail Palm grows outdoors here in Tucson where the temps soar to 110F in summer & can dip to 28F in winter. They handle temperature fluctuations just fine. Be sure to keep yours away from any cold drafts as well as air conditioning or heating vents.

Ponytail Palms are native to the semi-desert regions in Mexico. Because of this, they can handle the dry air in our homes just fine.

Their leaves do get brown tips which is in reaction to the dry air. It doesn’t really make sense but it happens. As you can imagine, mine growing outdoors here in the desert is loaded with them!

I give most of my houseplants a light application of worm compost with a light layer of compost over that every spring. Easy does it – a 1/4″ layer of each is plenty for a Ponytail in a smaller sized pot. You can read about how I worm compost/compost feed right here.

I don’t fertilize my Ponytail Palm & never have. I give most of my other houseplants a watering with Eleanor’s vf-11  in late spring & summer.

If you choose to fertilize yours, don’t over do it because salts build-up & can burn the roots of the plant. This will show up as brown spots on the leaves. Once a year should do it.

Avoid fertilizing a houseplant which is stressed, ie. bone dry or soaking wet.

You don’t want to fertilize houseplants in late fall or winter because that’s their time for rest.

The roots of my Ponytail Palm were very tight. Although they like to be slightly potbound, this was a bit to the extreme!

Ponytail Palms don’t need repotting often & prefer to grow slightly tight in their pots. I’ve repotted my 3-headed Ponytail Palm, which I bought at the Santa Barbara Farmers Market 11 years ago, 3 times. It’s now in a 22″ pot & I won’t repot it again for a long time if ever.

The bulb grows as the plant grows so you may have to repot it into a bigger pot at some point just to keep everything in scale. Other reasons for repotting: a plant too tight in its pot has a hard time taking up water & receiving enough oxygen to the roots. And, sometimes the soil just gets old, looses its nourishments & needs to be replaced.

As for a soil mix, I would recommend planting yours in succulent & cactus mix when growing it indoors. This is important: Ponytail Palms do best with excellent drainage & a light mix, well aerated mix will prevent overwatering.

I now make my own succulent & cactus mix  but I recommend any of the mixes listed right below if you can’t find 1 locally or don’t want to make your own.

A few online options for buying succulent & cactus mix: Bonsai Jack (this 1 is very gritty; great for those prone to overwatering!), Hoffman’s (this is more cost effective if you have a lot of succulents but you might have to add pumice or perlite), or Superfly Bonsai (another fast draining 1 like Bonsai Jack which is great for indoor succulents).

You can plant a Ponytail Palm in potting soil (with pumice or perlite added in) but you have to be very mindful not to over water it. Remember, that bulbous base rots out easily. As an alternative, you could use 1/2 potting soil & 1/2 succulent & cactus mix.

More on how I transplanted my large Ponytail Palm.

If you click on link just above this, you can see how my Ponytail has grown. And yes, it was 1 of the plants I brought with me when I moved to Tucson.

I’ve never pruned my Ponytail Palms because they haven’t needed it. The lowest leaves gradually turn yellow & die off  (this happens very slowly) as the plant grows. I pull them off the trunk; I don’t prune them because they come off easily.

If the brown tips at the ends of the leaves due to dry air bother you, trim them off.

By the way, you can prune the head & trunk (stem) off of a Ponytail Palm & propagate it. If enough of the trunk is left on the bulb, new growth in the form of multiple sprouts will appear off the trunk.

Straight cuts usually bring multiple sprouts where cut & sometimes a few at the base.  Be warned: it can take a few months for any signs of new growth to appear so be patient.

These little Ponytail Palms have been propagated from seed.

The growers propagate them by seed. Or, in the case of my 3-headed Ponytail Palm, they can be divided.

I’ve only done this once but they can also be propagated by removing the pups (the babies or new growth via sprouts) at the base. You can pull them away from or cut them off the bulb using clean & sharp pruners or a knife.

When I made the cut, I was sure to get some roots along with the baby plant. I planted it in a 4″ pot filled with succulent & cactus mix & kept it relatively moist until the roots grew to be more established.

Mine have never gotten any but I’ve seen Ponytail Palms with mealybugs & spider mites.  Scale can reportedly be an issue too.

As with any pests, keep your eye out for them & take control as soon as possible. They’ll spread from houseplant to houseplant in no time.

Hip hip hooray, this is a plant which the ASPCA lists as non-toxic for both cats & dogs.

If you have kitties, be aware they’ve been known to chew on the long, crunchy leaves. This might make them sick. My kitty Ivan, who lived with us in San Francisco, loved to munch on PP leaves as well as bromeliads. Fortunately he just chewed on & never swallowed them!

Ponytail Palms do flower with age but it rarely happens indoors.

The leaves are long & narrow & have a bit of a rough feel to them. Be careful of their slightly sharp edges if you’re handling them for the 1st time.

The bulb develops a cracked appearance as it grows & ages. This is normal.

The trunk becomes much more pronounced & visible as the plant grows.

With proper care, they are extremely long lived.

They are non-toxic for pets but some kitties do love to chew on them.

To sum it up

This is very simple & straight forward – Ponytail Palms are a breeze to take care of.  The 2 most important thing to keep in mind to grow 1 successfully are: 1) They do best in bright natural light (this would be considered high light) & 2) They’ll rot out in a heart beat if you over water them.

I love these wacky plants whether they’re growing indoors or out. If you have enough light, give 1 a try!

How to Transplant A Large Ponytail Palm

You can find more houseplant info in my simple and easy to digest houseplant care guide: Keep Your Houseplants Alive