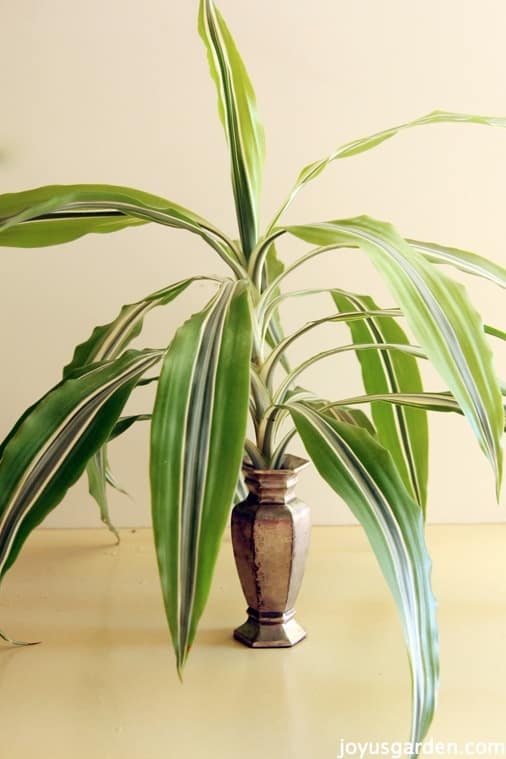 I almost titled this short post “I Accidentally Propagated My Dracaena” because that’s exactly what happened. Even if you don’t have a green thumb, propagating a Dracaena is oh so easy. If you do it by pruning the top off the plant and letting new growth appear or by stem cuttings in water, it propagates with little or no efforts from you at all.

I had gotten a little Dracaena “Lemon Lime” in a 4” pot when I lived up in San Francisco.  I snatched it up as soon as it was introduced to the trade because fell in love with the chartreuse foliage.  If you follow us on Facebook or Twitter then you know I love both green flowers and plants with chartreuse foliage.  Long story short, this Dracaena had gotten very leggy over the years and was much more stem that foliage.  I wanted it to remain on the smaller side so a  good ole snip snip was in order.

A couple of months later viola, roots started to appear.  As you can see, the roots emerged 3-4” up on the stem.

I meant to propagate the top so I could give it to a friend. There was about 8” of stem in the middle I cut off and composed. I could have propagated that too but chose not to.

I stuck the pot with the roots and about 6” of the remaining stem (which you can see in the video below) in my utility room behind a large bag of cat food.  I didn’t water it because I meant to dump the soil in the garden and compose the rest.  I forgot about it until I went to open that bag 2 months later for my kitties to feast on one night.

Lo and behold, new growth was appearing despite my ignoring it.

The nodes are sprouting off the “mother” stem that remains in the pot. You can see 2 & there’s one appearing on the backside.

So, this was an accidental propagation.  Not only did I let the plant go dry for many weeks but the utility room was cool and on the darker side because it was Winter.  I figured if the plant wanted to live this badly, I’d go along with it.  If your Dracaena is getting leggy, then cut it back.  It’s easy to do but it does take some time for the new growth and the roots to appear so be patient. Let me know how it goes!

Be sure to check out our book Keep Your Houseplants Alive because there are quite a few Dracaenas in it.  It’s a simple and easy to understand guide to houseplant care with lots of tips and pictures.

How To Care For A Dracaeana Marginata

How To Care For & Propagate A String Of Pearls Plant

How To Care For Your Tillandsias aka Air Plants

Previous Post: « The Makeover Of My Succulent Bowl Makeover
Next Post: A Lantern Posing As A Succulent Arrangement »