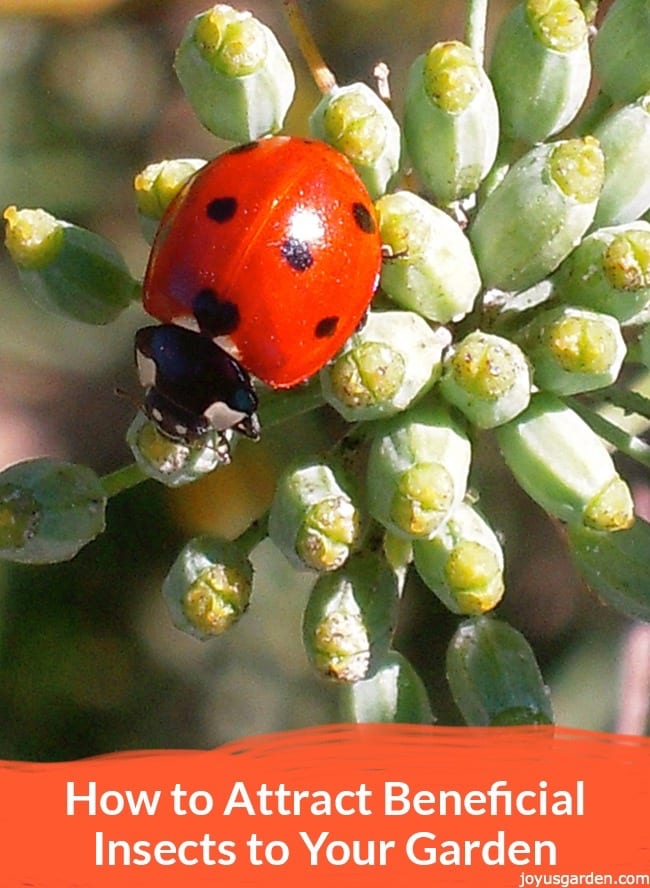 Pesticides aren’t the only way to control garden pests. In fact, a great way to fight off harmful insects is to strengthen their natural predators. By doing that you not only spare your garden from the toxic chemicals but help Mother Nature in the process. So the first deal in making your garden more attractive for helpful buggies is to…

Here are 6 ways to Attract Beneficial Insects to Your Garden

1. Learn the Difference Between Beneficial and Harmful Insects

That sounds easy enough. Obviously, one group of insects is good for your garden while the other one is bad, but that’s not the point. Do some reading and find out which is which. Most of the time, we decide to use pesticides to wipe out all crawling critters out of pure ignorance. That in itself is a problem because you actually need some of the insects for your garden to function properly.

Take the jolly ladybugs, for example. The Coccinellidae pollinate a great deal of your flowers on a daily basis, but what’s really interesting about them is their diet. They feast on aphids, mites and whiteflies, all of which are harmful to your garden. Red rid of ladybirds and your garden will be attacked by a second wave of pests, probably stronger than the first one.

Hot summer days can sometimes be hard for your little garden helpers, especially for those who hunt at night. That’s why it’s recommended you provide them with some shade and drinking water. This sounds like too much of a burden, but it really isn’t. All you need to do in terms of shading is gather some stepping stones or mulch. The non-flying insects such as ground beetles will just hide underneath and hunt during the night. And that’s it! Af far as water goes, fill a plate with fresh water and leave it in your garden. Mind you, the water needs to be fresh otherwise it might attract mosquitoes. Consider this choir out of your way if you have an automated irrigation system.

Beneficial insects like ladybirds, lacewings, the praying mantis and others will not come to your garden out of curiosity. They need to be attracted and this is where insectary plants come into play. Each insect has its own preferences, but the good news is you don’t need to plant a bunch of plants for each individual type of insect. Dills, for example, attract braconid wasps (which feed on caterpillars, aphids, tobacco hornworm and tomato hornworms), green lacewings (which feed on whiteflies, aphids, mealybugs, and leafhoppers) and tachinid flies (which feed on Japanese beetles, gypsy moths, squash bugs and cutworms). That’s just one plant, imagine how many helpful insects you can attract by having more. Still, it depends on what kind of insects you want to attract. Check this article on 14 Beneficial Insects for Permanent Garden Pest Control for more information.

4. Include Plants of Different Heights

This will make your garden seem more diverse and will help your beneficial insects a great deal. Ground beetles need cover from low growing plants like rosemary and mint to hide under. They lay their eggs in the soil where after hatching, the offspring start to hunt and attack soil dwelling garden pests. On the other hand, winged insects need the high parts of plants to lay eggs and feed on nectar. A good example for this is the green lacewing. Adult females lay their eggs on foliage after which each individual egg is attached to the top of a hair-like filament. After hatching the larva, which by the way is predatory, starts to hunt and eat aphid pests.

Be sure to plant not only annual but perennial flowers as well. As each plant population changes during seasons, so will your bugs. The point is to have new plants growing and coming into bloom as the old ones are slowly dying off. Then your beneficial insect population would remain relatively the same. The variety of flowers will also help your little critters by supplementing them with nectar and pollen if prey gets too low levels.

Large flowers such as roses and camellias are not as effective as tiny ones. The reason is simple. The beneficial insects are not too large either. Well, most of them anyway. In fact, some of them are predatory only in their early stages of development. So that means they’re really small and may have trouble accessing a particular plant. That’s why tiny flowers such as dill, sweet alyssum, and white lace flower will always work better for most insects. Don’t worry though, the hoverfly, for example, loves both tiny and large flowers.

Generally, pesticides are a huge no-no when it comes to insects in your garden. Like mentioned earlier, they can eradicate both good and bad bugs. Still, if you prefer to use insecticides, use selective ones. That basically means a product will harm one insect, but leave out another. Some examples include: Pirimicarb – targeted against aphids, Carpovirusine – targeted against codling moths and NPV -targeted against small Helicoverpa. There’s a negative side to these and most pesticides you should know about: they are not available for all pests and they don’t always provide 100% control over harmful pests. Sometimes even natural products such as rotenone can kill beneficial insects. Use this method only as a last resort.

Pol Bishop is a London marketing executive for Fantastic Gardeners. We enjoy reading and writing on different topics in the gardening niche and also has a small garden of his own. When he isn’t planting or pruning he’s usually at the local park walking his dog.